David Whetstone enjoys a night in the company of Newcastle Choral Society. 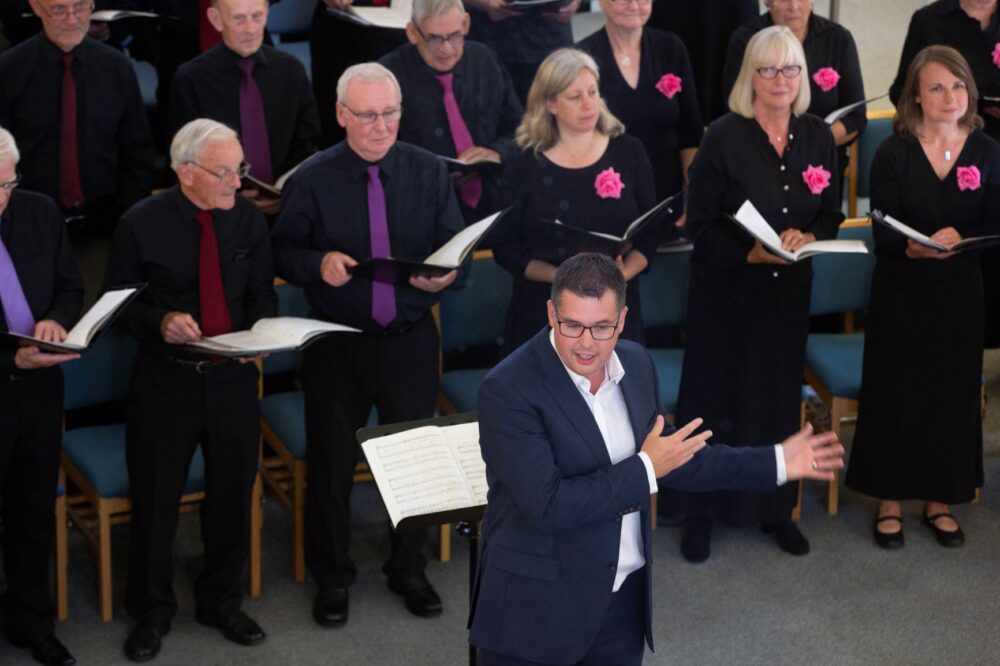 A performance of Carmina Burana by Newcastle Choral Society attracted a near capacity audience to the banqueting suite at Newcastle Civic Centre on March 23.

That shouldn’t have been a great surprise to anyone present.

The 80-strong society, formed 65 years ago by John Healy (although it was initially the St Andrew’s Singers and then the St James’ and St Basil’s Singers), has a loyal following built up over time.

Moreover, a performance of Carl Orff’s stirring and popular cantata is a significant event.

The libretto, based on 24 medieval secular poems found in a monastery near Munich, tells a cautionary tale about the wheel of fortune whereby triumph can turn to disaster with one quick spin.

Sung in Latin, and starting in top gear with a thunderous, foot-stamping roar – “O For-tun-a, vel-ut Lu-na…” – Carmina Burana goes straight for the jugular, shivering the timbers and agitating the hairs on the back of the neck.

Between then and the final reprise of O Fortuna, with much thumping of the drums, it considers all the frailties of the flesh with quivering trepidation, black humour and remorse. Quite the roller-coaster.

Done well, it’ll rumble in the memory – as this surely will for all those who attended, especially the children from two RC primary schools, St Godric’s in Durham and St Stephen’s in Longbenton, Newcastle, who performed with the adult choir, three soloists, two pianists and six-strong percussion ensemble.

Just to digress, the wheel of fortune was rotating vigorously at a BBC Proms performance of Carmina Burana in 1974 when Andre Previn was conducting.

One soloist, the great North East baritone Thomas Allen, overcome by the heat in the Royal Albert Hall, fainted soon into the performance and was carried out. Into the breach stepped audience member Patrick McCarthy, a music student, who coolly rose to the occasion and earned rapturous applause.

Mark Anyan, musical director of Newcastle Choral Society, had no such mishap to contend with.

Everyone was on top form. The soloists – North East tenor Austin Gunn, soprano Lisa Swayne and baritone Philip Smith, a former zoologist who was once national otter surveyor of England before fortune’s wheel spun him towards a singing career – rose to the German composer’s vocal challenges in thrilling fashion.

The choir members seemed to be enjoying themselves. The audience certainly was. Who can’t respond emotionally to a drinking song or a roasted swan’s lament for its former feathery self?

The drama of O Fortuna has been plundered by umpteen filmmakers, making it one of the best-known pieces of classical music. But it was good to hear it in the context of the whole rich and varied work.

Carmina Burana occupied the second half of the concert. In the first half the children brilliantly sang a medley of favourites, Austin Gunn offered a brace of songs by Roger Quilter and piano duo David Murray and Eileen Bown performed Witold Lutoslawski’s Variation on a Theme of Paganini.

The choir opened with Hubert Parry’s I Was Glad and the elegiac I Believe in the Sun, composed by Howard Goodall for the first Holocaust Memorial Day concert in 2001.

Next up for Newcastle Choral Society is a summer concert on June 29 at Trinity Church, Gosforth. Rehearsals take place on Mondays at St John’s Church, Kingston Park Avenue. For details about joining the society, go to www.newcastlechoralsociety.org.uk