Nakedness at The Laing

An exhibition which you’ll only find in Newcastle has opened at The Laing Art Gallery in the city centre. Exposed: The Naked Portrait features 70 pictures from the National Portrait Gallery and David Whetstone has seen them all, in all their glory. 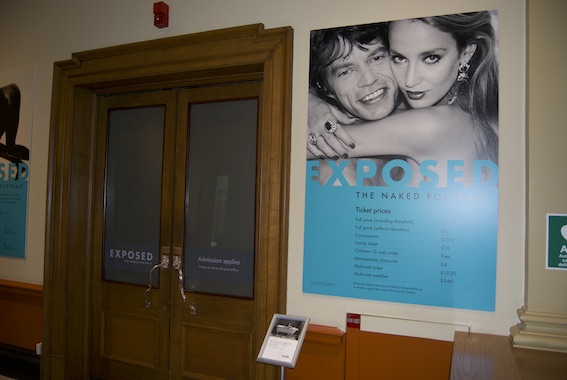 Mick Jagger and Jerry Hall, Lennon and McCartney (though not together), Kate Moss, Sting and even Johnny Vegas are to be seen ‘in the buff’ in the latest ticketed exhibition at the Laing Art Gallery.

Exposed: The Naked Portrait considers the nude and the depiction of nakedness in art and advertising.

Curator Amy Barker, of Tyne & Wear Archives & Museums (TWAM), said the idea for the exhibition came from a small display of 12 pictures at the National Portrait Gallery about 18 months ago.

“We thought it was a great idea that could be built in to a bigger show and they were very supportive of that,” she said.

Seventy images from the London gallery are shown in adjoining rooms with 15 items from the collections of TWAM and one, a photographic portrait by Lisa Gunn, from the Herbert Art Gallery & Museum in Coventry.

This is the only showing of the exhibition. It’s a coup for Newcastle, where it deserves to be a popular attraction, and good for the National Portrait Gallery’s exposure outside the capital.

“We’re really excited about this expanded showing in Newcastle. We’re keen to develop our partnerships with regional museums as much as possible,” said NPG curator Rab MacGibbon.

“The exhibition has a universal and enduring theme. It’s something we can all relate to. It shows how norms change and how something deemed voyeuristic at one time can be seen as empowering a generation later.”

The exhibition carries a warning that those aged 16 and under must be accompanied by an adult although I wouldn’t imagine there’s much to unsettle most children. Even the famously challenging Robert Mapplethorpe is represented by a conventional photo of skater John Curry.

In fact, the degree of ‘buffness’ on display varies a great deal.

Some subjects, like the self-referential Gilbert and George, apparently as happy starkers as in their trademark Savile Row suits, let it all hang out in a vivid piece from 1997.

Others seem endearingly coy although we can’t assume that would have been the case at the time. Chorus girl Pearl Aufrere, photographed peeping from a bath, was probably considered as daring as Gilbert and George back in 1911.

In many cases the bodies are only partially revealed. There’s Lewis Morley’s famous 1963 photo of Christine Keeler astride that chair (alongside a knowing send-up showing playwright Joe Orton in similar pose).

And in the case of some of the photographic portraits, nakedness from the neck or chest down must be taken on trust.

Nell Gwyn, judged by Simon Verelst’s oil painting from about 1670, was not a shy bairn. Charles II’s mistress has a ‘come hither’ look and her prime assets are proudly revealed.

Exhibits are gathered in sections, each exploring a particular facet of the depiction of nakedness.

There’s the nude, the portrayal – dating from classical times – of the anonymous human body. Life drawing classes down the years have helped artists to study the way of all flesh.

One exhibit, never shown before and owned by the Laing, is a delicate pastel drawing of a seated nude done by James Grant in 1902.

It hangs near Giovanni Battista Lombardi’s splendid 19th Century marble statue of Susannah startled by the Elders (a Biblical tale about a pair of peeping toms) which has been transferred from the Shipley Art Gallery in Gateshead.

Her look of indignation, frozen for all time, falls on every exhibition visitor.

In the section Bodies of Desire, including the portrait of Pearl Aufrere, a 1970s Norman Parkinson photo of twins Amy and Ann McCandless (red haired, clearly lying on top of each other but displayed vertically), the Nell Gwyn painting and a portrait of mountaineer George Mallory by a nakedly admiring Duncan Grant, the identity of the sitter matters.

Complicity between artist and subject is alluded to in the wall-mounted introduction. More than academic studies of human physique, there’s a bit of a sizzle going on in many of these pictures.

One of them even moves. It’s Sam Taylor-Johnson’s (Sam Taylor-Wood as was) famous video of David Beckham sleeping. Made in 2004, it was a very popular attraction at BALTIC, Gateshead, a couple of years later. You do wonder how big a draw Beckham will prove to be now.

Another section is called Reclaiming the Body and it shows how female artists and photographers have dealt with nakedness in art. Once it was almost exclusively men entertaining men. Not any more, quite rightly.

Photographic self-portraits by Tracey Emin and Sarah Lucas are there to be pored over along with a striking, full-length oil painting by Chantal Joffe of herself and her daughter, Esme.

Vivienne Westwood can’t have been out to titillate when she posed for Juergen Teller in 2009 and nor was Germaine Greer when she stripped off for Polly Borland 10 years earlier.

“It was my idea to take my clothes off because I did not fancy being portrayed on my bed like an old lady in a nursing home in me cardigan,” said Greer, adding that “I don’t have any clothes on for a good half of my life”.

The beautiful people are much in evidence.

Sting was photographed in 1985, covered in desert sand by Annie Leibowitz. The same photographer famously portrayed Lennon and Yoko Ono, he curled naked against her clothed body. That tender photo, taken hours before Lennon was shot, is shown here.

But no exhibition of nakedness can ignore humour (just ask any of the 1,700 people who stripped off mirthfully on the Quayside for Spencer Tunick back in 2005).

So here’s comedian Johnny Vegas, when he was much bigger, mimicking the famous Vanity Fair cover shot of a pregnant Demi Moore for photographer Karl J. Karl in 2006.

And here’s another reference to garments by Joe Orton, sketched in the nude by Patrick Procktor in 1967. “After I’d drunk my tea, I took my clothes off,” recalled the creator of What the Butler Saw. “I kept my socks on because I think they’re sexy.”

Exposed: The Naked Portrait is at the Laing Art Gallery until March 3, 2019. The gallery is open every day except Monday. For admission prices visit the dedicated page on the Laing’s website.