Last month, award-winning writer and theatre maker, LAURA LINDOW spent some time with more than 100 people who had gathered in the ballroom of the Wallsend Memorial Hall – or the ‘MEM’ to the many who know and love it.

From toddlers to pensioners, the group had come together to tell the story Laura had written in response to the MEM’s very own song, Heartbeat Ballroom, which itself had been composed by another award-winner – namely North East folk diamond, Katie Doherty.

A video, made by film maker Ian Fenton with Northern Stars – the Tyneside Cinema’s in-house production crew – will be released later this month. But in the meantime, here’s some thoughts Laura came away with after the filming – we couldn’t be happier to have her share them here. 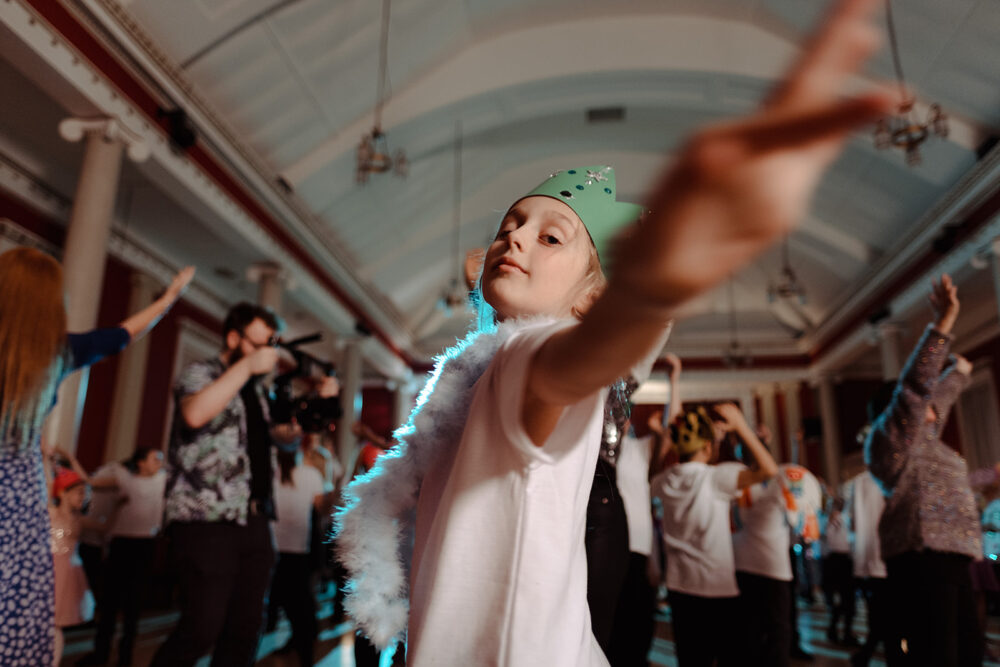 On a weekend at the end of November, I was lucky enough to be at the filming for Katie Doherty’s wonderful Heartbeat Ballroom video, for which I wrote the ‘Margot and Mim’ narrative.

My brief was to create a story that might capture some of the world of the song, and most importantly that could invite as many community dancers in as possible. Simple enough to follow, but with a strong enough heart to translate.

I love working with Katie. I find massive inspiration in her work and was honoured to be invited on board with her, and with Sarah and the emerging exceptional team!

I started of course with the song itself. The lyrics have been directly informed by the stories of people who dance and have danced at the MEM. And so I began with these. As such Katie’s song is so soaked in nostalgia, but also swirls with an optimism and delight at moving your feet here and now. I wanted to honour this sense of a collision of dreams. A spinning heartbeat. A dance for anyone and everyone, past present and future. 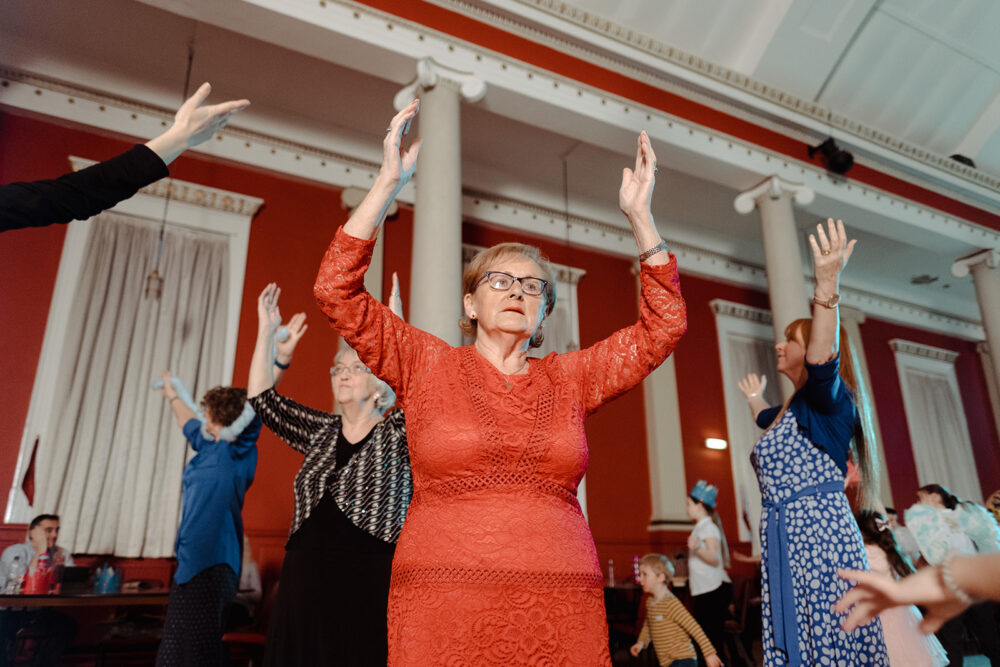 So. The story. The story is one of two characters, one younger (Mim), one older (Margot), both caught up in situations where they have a need for escape. Where their worlds and the people around them seem to be at odds and out of sync. Separately they find their way to this beautiful ballroom where through the dance and the music they find commonality and their worlds and their imaginations collide

Katie sings, ‘everything has changed, but you still take me home’. I wondered who that could be in our story. A parent? A carer? Grandparent? A former or future lover? A life dance-partner. Margot and Mim find each other through our story, but they also find an ease with themselves that carries them back into their own lives with a renewed tenacity and enduring sense of sparkle.

I love the idea that in the MEM, this incredible space is and has been a wonderful escape and expression for so many. That in the shadows of the big ships, and faltering industry, the strength and the warmth of the communities endure and this is never more apparent than when one hand reaches out for another and whether in trainers or gold dance shoes, that a dance floor can become your own. A space to be. 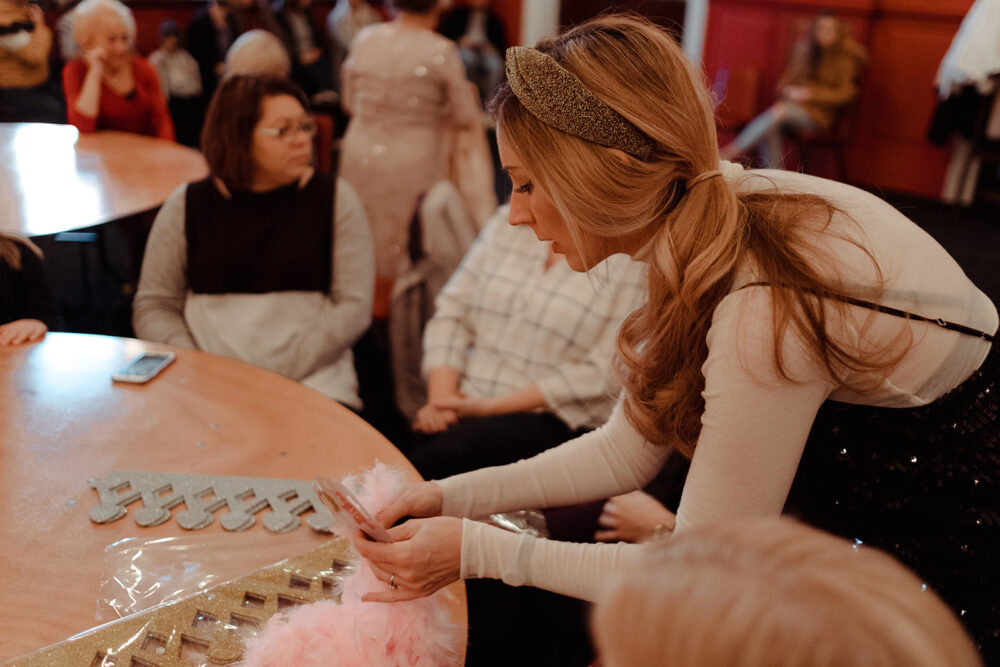 Singer Katie Doherty pitches in with some costume tweaks

When thinking of Wallsend my mind’s eye always etches the outline of the ships, the shadowy iron giants and the noble cranes that are sorely missing from the skyline, but have left such legacy.

It feels a little strange to talk about my take on the story. What has been a real delight during this project is that it is owned by so many. I could never have dreamed up the wonderful cast who have stepped into the shoes of the characters, and added their magic to the story.

They have brought it to life. I wasn’t involved in the casting of the piece and so meeting the real people playing their parts was like meeting celebrities! It was so exciting and a real treat.

After all as in the sentiment of the song, ‘places are made by the people you meet’. During filming, I couldn’t believe the generosity and warmth in the room. During the shoot, I spoke with one wonderful woman who has been coming to the MEM since childhood. Who used to touch the memorial statue on her way to school and back, who used to go to the leek shows in the room downstairs, but who never knew until the day of filming about the beautiful ballroom set one floor up. A secret pocket of gold moving in time. 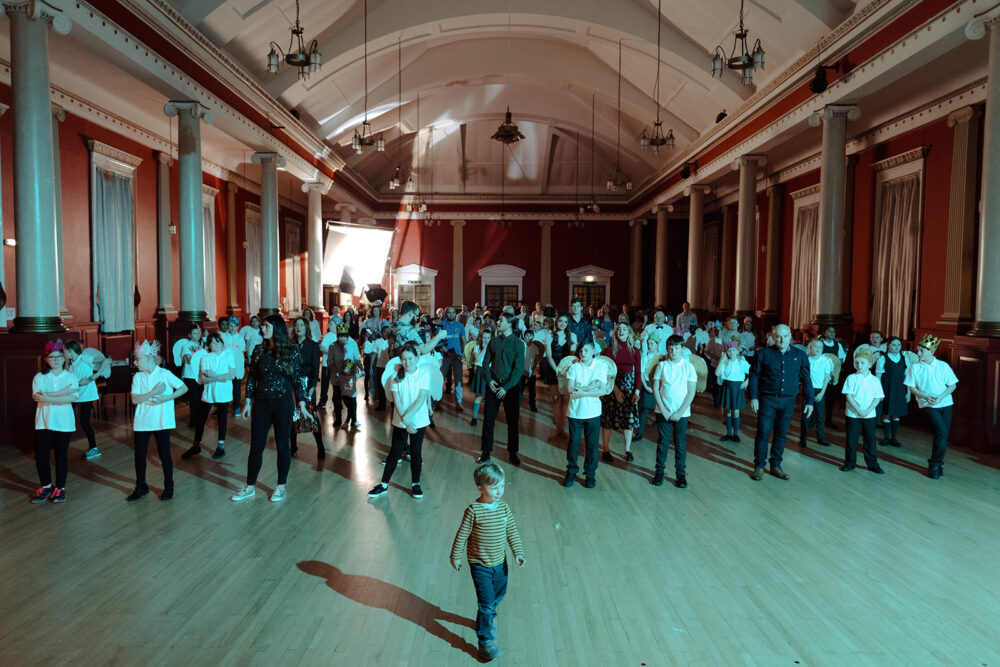 Another dancer, a younger woman, had come to join in, with her Nana’s shoes in her bag. Her Nana had spent many a night dancing at the MEM in the 50’s in her youth, and had entertained with stories of the Wallsend ‘place to be’ where it would all ‘kick off’ on a weekend. The romance as well as the scrapping! Passions playing out in time. And so, her Nana’s shoes took to the floor once more to dance, the leather marked and shaped by steps gone by, but ready to learn new steps, steered by a granddaughter’s sense of the world.

I think watching someone dance is like watching their life and love manifest. Thoughts of The Great North Run where runners pin their hearts to their shirts – names to inspire them and drive them on. These thoughts hung in the air when I was writing. 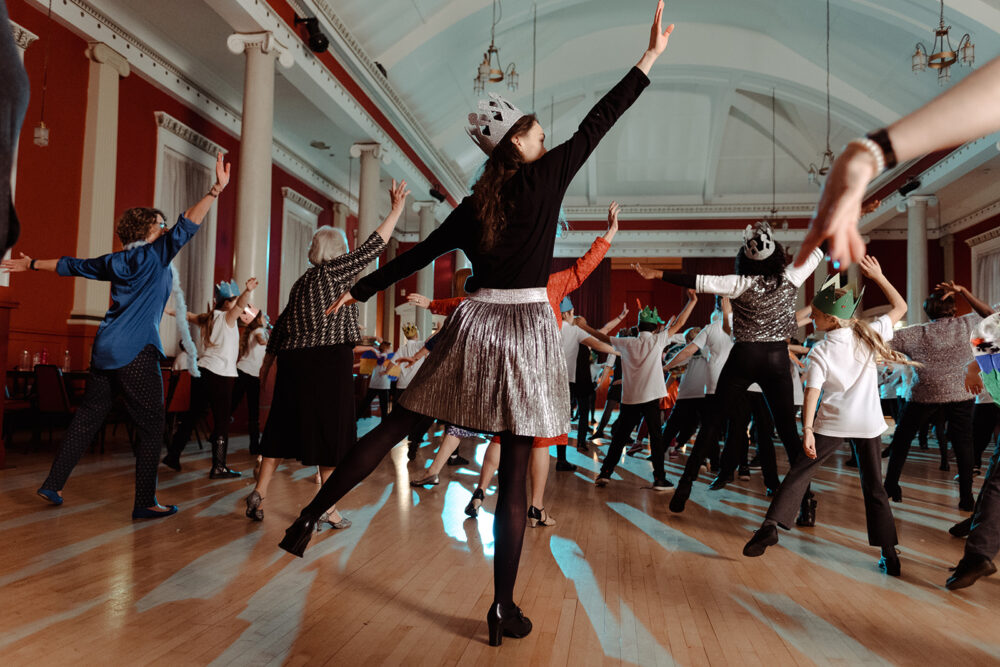 In our story, not runners but dancers, who instead of names have crowns and wings and feathers, and whilst in step with one another, they dance with their own joyous individual styles and technique.

Everyone coming together under the exceptional encouragement of Alicia (Meehan) and her choreography, and with Ian (Fenton, film maker) and his brilliant team jollying us all along, with Dave and Shona’s (Gray and Mooney, respectively) gorgeous accompaniment, Katie’s beautiful song swept us all along. Our Margot and our Mim right amongst us. Fact and fiction. Dreams and reality. Hearts and shoes. Everyone separate, but everyone one.

Everyone who took part in Heartbeat Ballroom have been invited to a special screening of the finished video on December 13.  The song will also be a track on the debut album of Katie Doherty and the Navigators which will be launched at Sage Gateshead on January 17, 2019.