Christine Keeler is seen and celebrated by 21st Century women in an exhibition at Vane in Newcastle. David Whetstone  reports back. 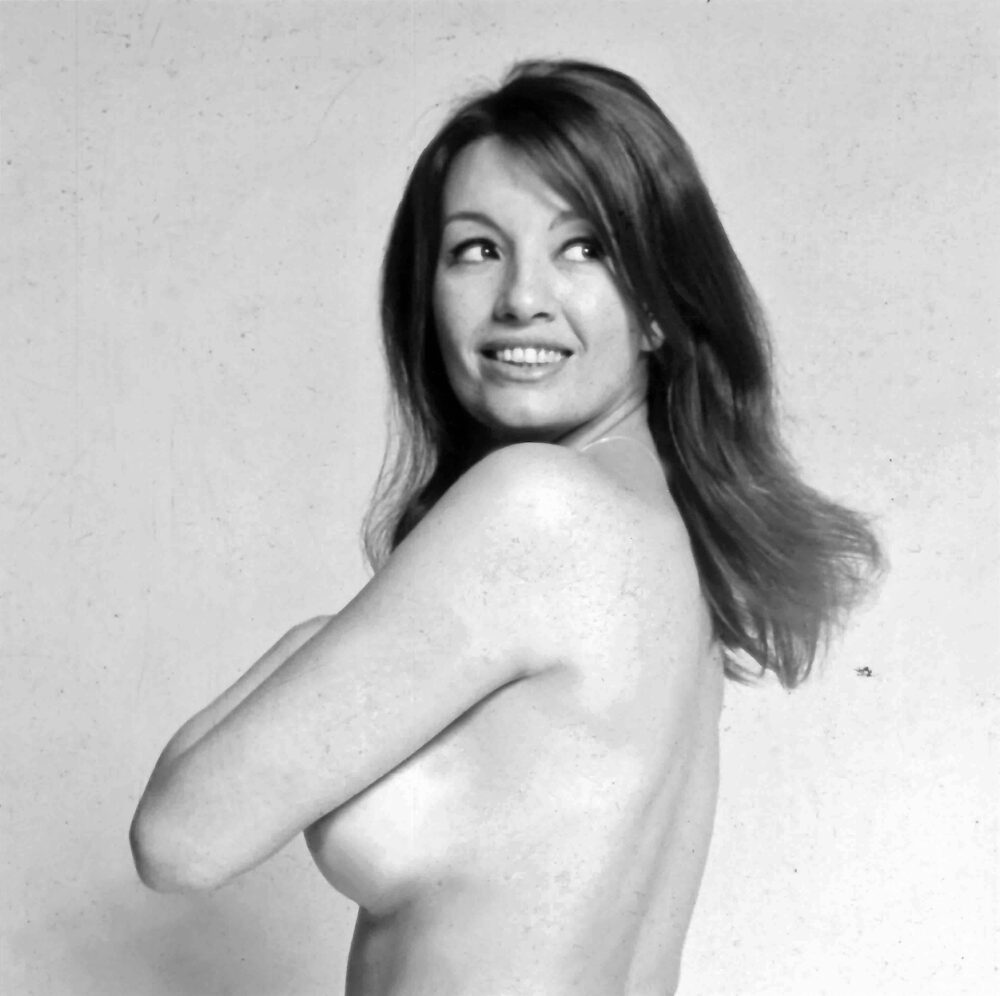 The description ‘photogenic’ does scant justice to Christine Keeler. She had film star looks and perhaps could have been one if her life had worked out differently.

But fate had other things in store for her.

At 19, following a difficult childhood, she was scratching a living in Soho, doing a bit of ‘modelling’, though not the sort that meant the catwalk or a spread in Vogue.

Sometimes she lived with a socially well-connected osteopath called Stephen Ward and through him caught the eye of John Profumo, Secretary of State for War.

It has been said she was intrigued by this middle-aged man because he was married to a film star, Valerie Hobson.

There’s no mystery about why he should have been attracted to her.

Their brief intimacy of 1963 became immortalised as the Profumo affair. Since another Keeler admirer was a Soviet spy, it wasn’t hard to portray her as a security risk.

Profumo resigned after first denying his involvement with her. Ward was tried on vice charges at the Old Bailey (largely, it has been suggested, to assuage the blushes of a government that would soon fall) but committed suicide before judgement was passed. 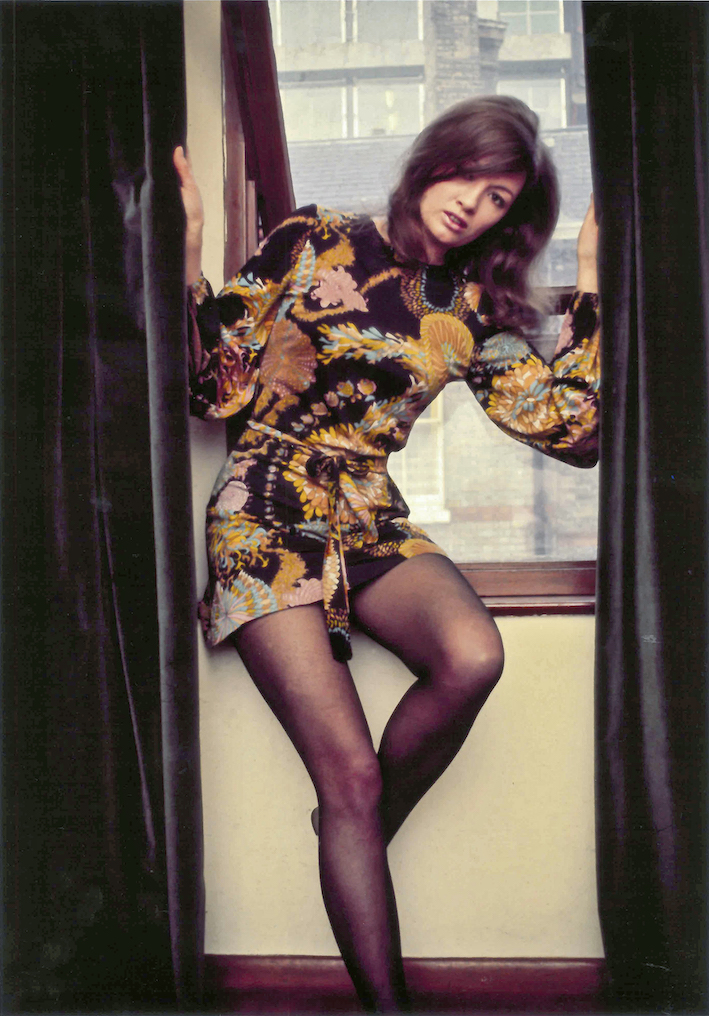 It was the trial that effectively fixed the names and scandalous reputations of Christine and her friend Mandy Rice-Davies in aspic. Profumo, for subsequent charity work, would receive the OBE.

It was all a long time ago. Even Scandal, the film about the notorious affair with Ian McKellen cast as Profumo and Joanna Whalley as a beautifully wide-eyed Christine, is now 30 years old.

But it is to this film that we owe Dear Christine, the exhibition which “aims to reclaim and reframe… a woman castigated for her role in a notorious political scandal”.

Curator Fionn Wilson, who was born in South Shields, was first alerted to Christine Keeler by a screening of Scandal at the Tyneside Cinema, just across the road from the exhibition.

“I was 17 or 18 at the time but her story really resonated with me,” she said at the official opening.
“In fact, it stayed with me for years.”

Keeler, she suggested, had paid a terrible price for the brief fling, being shamed in the newspapers and suffering the consequences up until her death in 2017.

“It’s been a misery for me, living with Christine Keeler,” the woman herself once said.

Helping to ensure the scandal would never go away was Lewis Morley’s now iconic photo of Christine sitting (seemingly naked but she insisted not) astride a back-to-front chair. Much copied and parodied, it came to signify a decade’s seamier side.

But according to Fionn Wilson, Keeler was ahead of her time in challenging, even if inadvertently, the prevailing morality and the hypocrisy of the establishment. 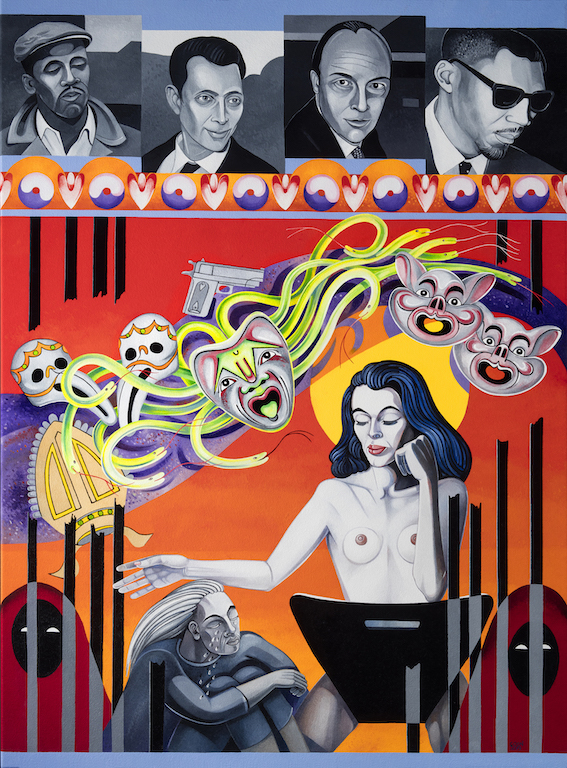 When inviting women artists to contribute to an exhibition, she found she was not alone in her opinion of Christine.

She explained: “I wanted to add to the visual record of her life, which represents themes still relevant to this day, including class, power and the politics of sex.

“The participating artists are women who offer their own perspective on a narrative that has mostly been led by men.”

So at Vane we have a 21st Century women’s eye view of a Christine reborn and rehabilitated. Everywhere you look are those features, so easy on the eye, but with a spirit of joyous rebellion.

An oil painting by Roxana Halls, called Laughing While Smashing (for Mandy and Christine), shows Keeler and Rice-Davies engaging in a bit of gleeful vandalism, the shattered windows perhaps representing the disapproving eyes of the establishment that threw them to the wolves.

Fionn, quick to explain that she’s a self-taught artist, has contributed several paintings, including Christine and the Poisoned Apple and Christine at the Flamingo Club. 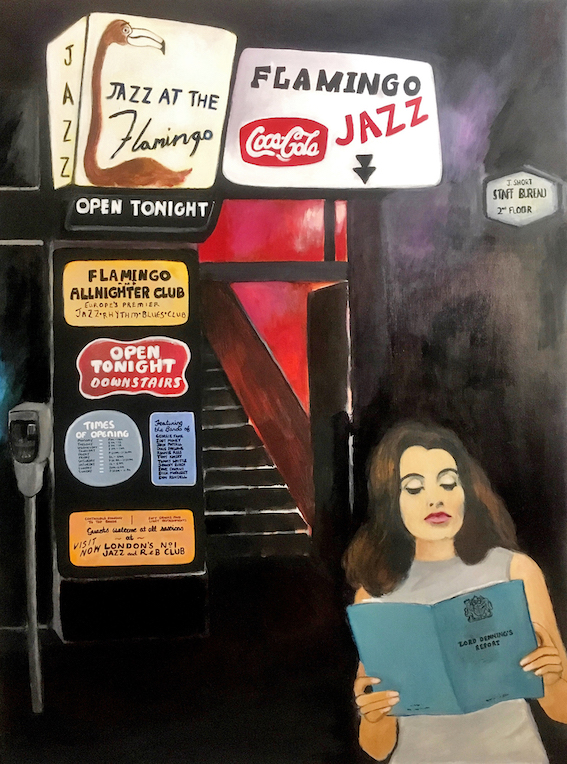 Christine at the Flamingo Club, by Fionn Wilson

Claudia Clare’s Christine Keeler: An Uncertain Pilgrimage is a beautiful creation in glazed earthenware and gold leaf. More down-to-earth is Julia Maddison’s Remains, comprising a black bin bag cut in the shape of a swimsuit. Watch out or you’ll tread on it.

Most startling of all, and pulling no punches, is the video called I AM WHORE by Caroline Coon. It depicts the seasoned artist, writer and activist dipping her hands in a bucket of ‘blood’ and dousing her white-robed body while delivering an impassioned monologue on behalf of woman who have suffered in a misogynist culture: “Whore, slut, slag, tart…”

How, you wonder, would that have gone down in 1963 when Lady Chatterley’s Lover had only recently been declared not obscene?

It was created in homage to a lost painting of Keeler called Scandal 63, made in 1963 by pop art pioneer Pauline Boty. It incorporates tiny traces of paint which once belonged to the artist who died in 1966, aged just 28. 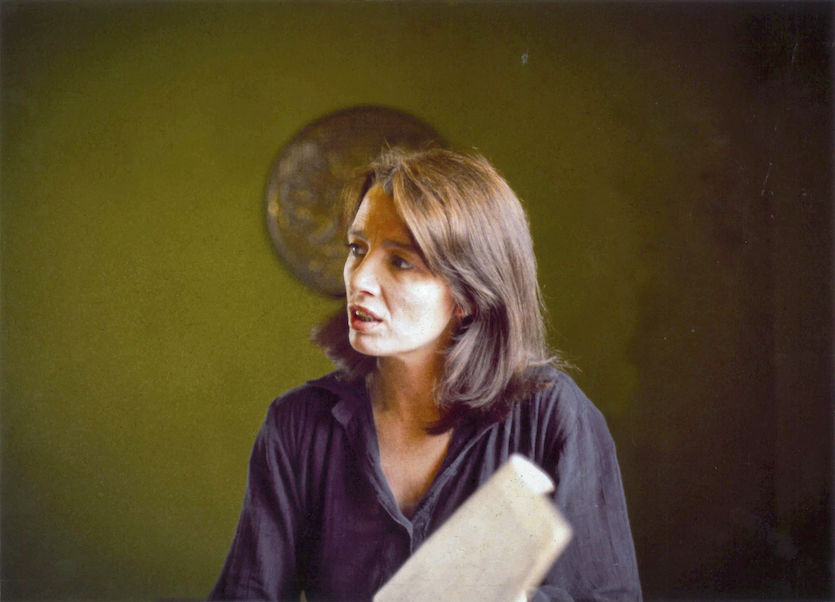 Dotted amongst the artworks are photographs of Christine Keeler taken by her friend James Birch. They offer a revealing counterpoint to the press snaps and that Morley portrait.

Dear Christine, which is part of the current Festival of Women, runs at Vane until June 29 with an accompanying programme of talks and activities. Check www.vane.org.uk for details.

It is also to tour to Swansea’s Elysium Gallery (October 5 to November 9) and Arthouse 1, London (February 2-29 next year).

Back to articles
« Review: The Dark Earth & The Light Sky – People’s Theatre Studio
Biscuit Factory pops up with summer-long street food plans »
Share on
Share on