A play exploring an unlikely friendship and what it means to be different is being served up in unique fashion at Alphabetti Theatre in February. SAM WONFOR talks to the trio behind it. 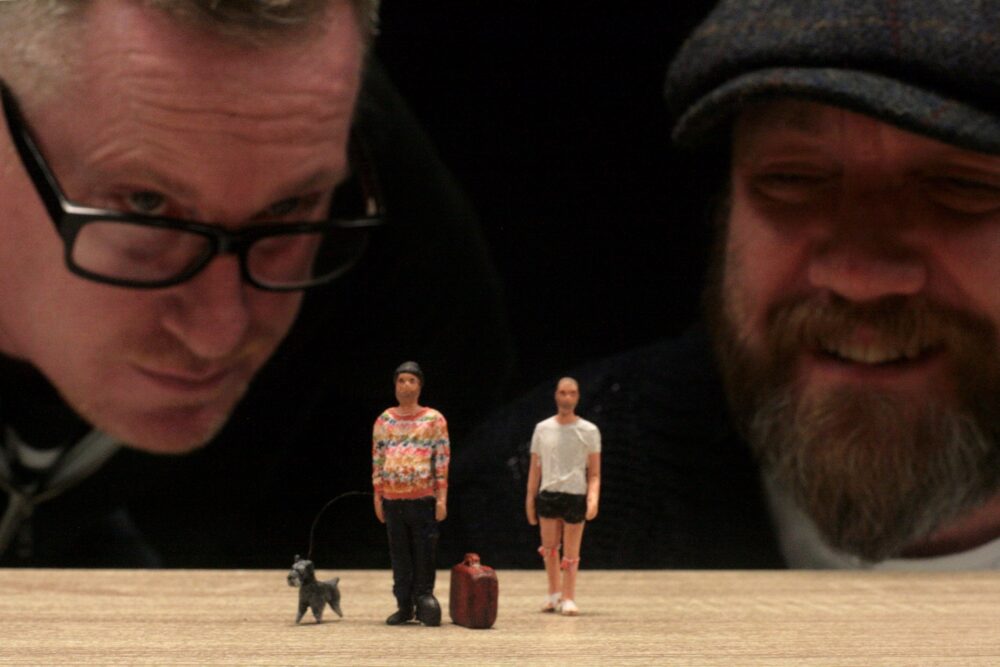 As far as Ali Pritchard, Gary Kitching and Steve Byron are concerned, audiences who get along to see their play Bacon Knees and Sausage Fingers at Alphabetti Theatre during February will be seeing something unlike anything they’ve seen before.
Quite the boast, one may think… but when it comes to theatrical doings, these fellas know their onions – as well as their bacon and sausages in this case – so it’s probably wise to give them the benefit of the doubt.
Of course this claim doesn’t apply to anyone who caught the first outing of the play in 2016. For them, it will be like seeing something very much like something they’ve seen before.
Back then, a five-night run at Alphabetti’s former New Bridge Street home left audiences in a variety of emotional states – none of which could have been described as apathetic – and left Ali, Gary and Steve knowing they wanted to bring the story back to the stage at some point.
“It was absolutely something we wanted to do again,” says Alphabetti’s founder and artistic director, Ali, who is directing the play. 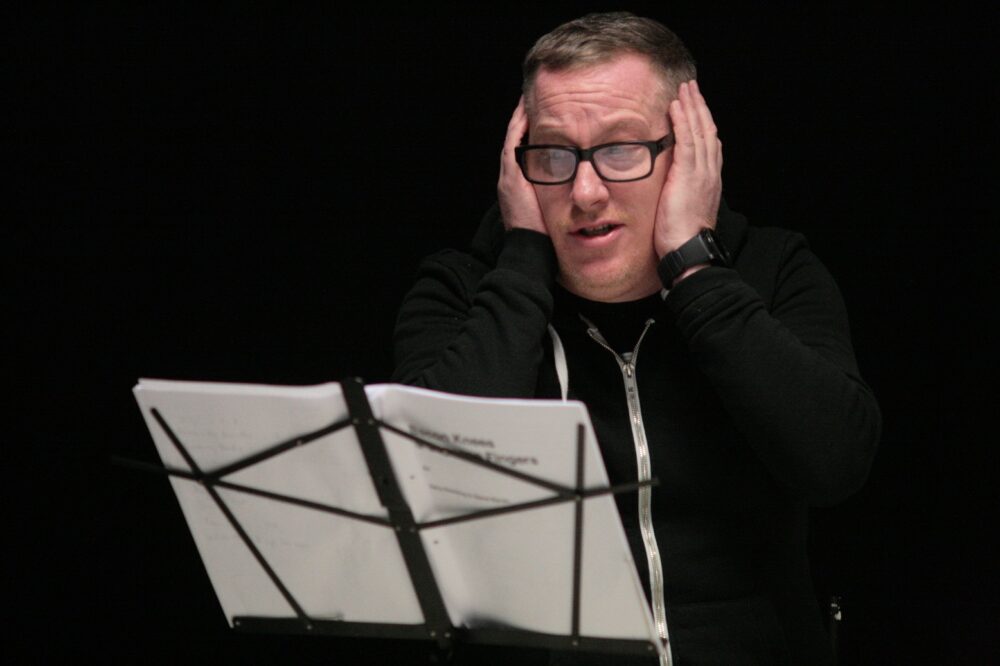 “The play got such a reaction first time around,” adds Steve, who plays Sausage Fingers. “I mean some people hated it. But many more people loved it. It really seemed to get to people – and that’s what you’re aiming for. A connection.”
“We were quite shocked at the response,” adds Gary, who plays Bacon Knees. “How the audience were left at the end of the show… a lot of people became overwhelmed by it. And a lot of them wanted to give me a hug.”
Although it got its premiere in 2016, the seeds of the play were sewn the year before when Ali asked Gary to take on a 24hr theatre challenge.
“I gave him three pieces of inspiration and he had 24 hours to come up with a play,” says Ali. Old Man by Neil Young; a picture of a pencil sharpener; and an interesting historical fact that the High Level Bridge in Newcastle was closed by locals just a week after it opened in 1849 because they wanted to use it for dog racing.
Gary, who was the writer behind the award-winning productions Wor Stories and Unspoken, which blew audiences away a couple of years back at Newcastle Theatre Royal, quickly got long-time friend Steve involved to put some flesh on the bones of the scenario he had bubbling.
“As it turned out, that ‘fact’ about the dog racing doesn’t seem to stand up…” admits Ali. “Or at least we haven’t got it verified yet.”
But everyone knows what they say about facts and a good story, don’t they?
Thanks to funding from Arts Council England, the abstract hope the trio had to bring the production, which is written and performed by Gary and Steve, back ‘at some point’ comes into sharp focus for three weeks in February as Alphabetti audiences are once again invited to immerse themselves in a story which is described as ‘harrowing, heart-warming and hilarious’. 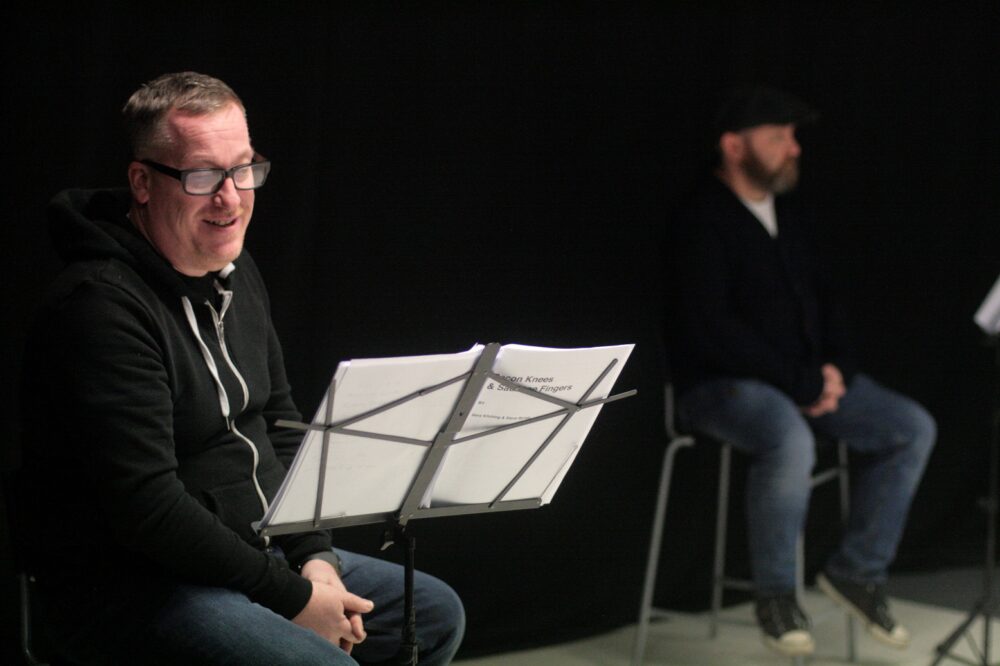 Exploring the lives and ensuing friendship of two social outsiders who meet on the High Level Bridge, the play finds one of them dressed in a vest and pants with bacon attached to his knees and the other accompanied by a small dog and in possession of an old suitcase.
“Not that you’ll see any of that,” says Gary, who categorically won’t be wearing any bacon on his knees. “It’s good to make an audience work too.
“The play is very moving and tackles really serious subjects – but it’s also very, very funny,” he continues. “And then it makes you ask yourself – ‘Should this be funny… should we be laughing at this?’ I like that tension. But it’s uncomfortable. And it’s supposed to be.” 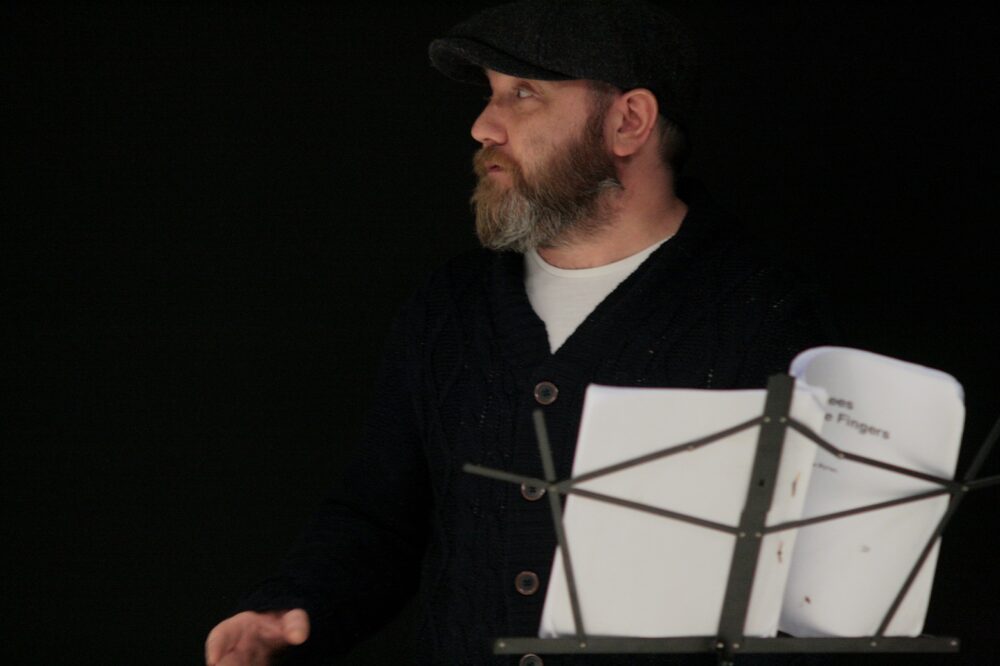 Set in the present day, the story looks at the idea of difference and plays out some of the challenges people with differences regularly have to deal with.
Steve, who has spent a lot of time working in education with adults in the North East who are living with mental health issues and difficulties, says he was able to draw on his experiences and was keen to highlight some of the prejudices which people can come to expect as part of their daily routine.
“It’s important to know that this kind of thing is happening. To real people. We wanted to get that across,” he says.
Silver lining fans among you will be pleased to hear that there’s another ‘h’ to add to the aforementioned ‘harrowing, heartwarming and hilarious’ summing up of what to expect from Bacon Knees and Sausage Fingers.
“There’s hope,” says Steve.
Gary laughs: “Unlike a lot of my stuff! It has a feeling of hope. There’s hope for a happy ending.”
And talking of endings… the Arts Council funding means that audiences – who will be asked to Pay What You Feel on the night (but who still have to reserve a ticket) – will also be treated to response pieces at the end of the play.
Ali says: “We’re delighted to have commissioned Diji Solanke, Bonnie and The Bonnettes, and The Twisting Ducks Theatre Company to produce 20-minute pieces in response to the play, which they’ll take turns to perform during the run.
“We’re really looking forward to seeing what they come up with.”

Bacon Knees and Sausage Fingers is a co-production between Alphabetti Theatre and The Worriers and will play the theatre, on St James Boulevard from February 1 to 23 (excl Sundays and Mondays). Tickets are Pay What You Feel, but should be reserved. Visit the website for more information and bookings.

Back to articles
« Where to gan vegan: Finish Veganuary in style
Review: Romeo and Juliet at Newcastle Theatre Royal »
Share on
Share on