Where to gan vegan: Finish Veganuary in style

If Veganuary is going well, but you’re craving something special to get you over the line, allow SAM WONFOR to serve up a tasty menu of dairy-free places to try. 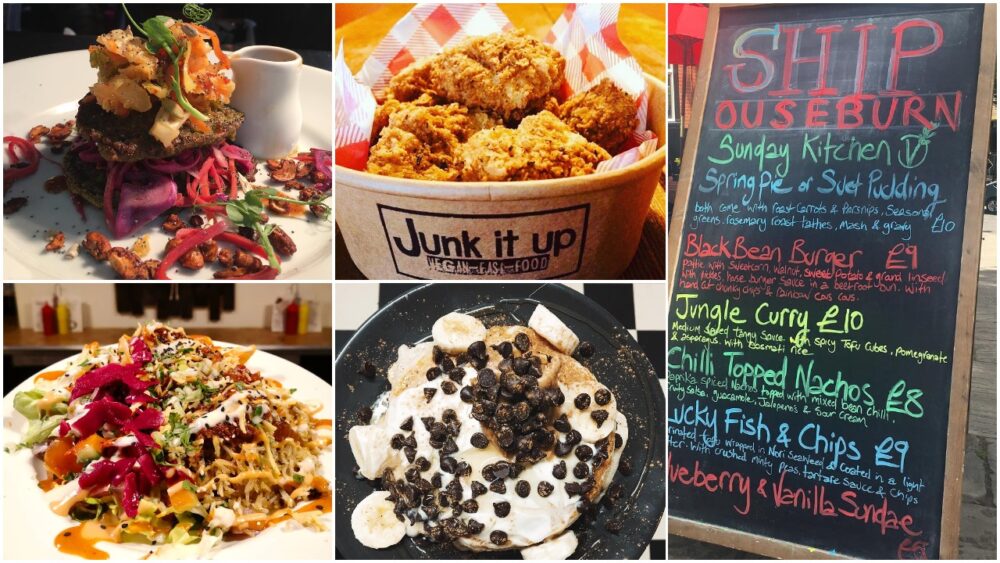 In many ways, January does seem the best month to roll the dairy-free dice, doesn’t it?
Traditionally a time for fresh starts, out-loud resolutions and pledges to tread pastures new, it’s also undoubtedly the most suitable page of the calendar when it comes to wordplay.

Much as we might try, Vegapril, Veguly or Vegovember just don’t hit the right note.
That said, January is also the month where we find ourselves a bit (a lot) skint and in regular need of figurative and literal comfort due to a combination of festive withdrawal, the aforementioned skintness and it being absolutely freezing. So high fives all round to everyone who has got this far.

But as we enter the last week of Veganuary, even those of us who have embraced the challenge like a new plant-based best mate could be forgiven for allowing their eyes and tastebuds to wander.
When it comes to what you’ll take on your plate – or in your favourite mug – there’s no denying that deciding to sidestep anything which has come from an animal requires some additional thought. Particularly when it comes to eating out.
And although more vegan options are being added to the menus of restaurants all the time… sometimes it’s lovely to book a table in a place where you know you have everything to choose from.

With that in mind, we though it might be helpful to round up our favourite eating out vegan haunts.
(Helpful note: Many of these crackers are also taking part in Vegan Restaurant Week – which is running alongside the ever-popular NE1 Restaurant Week until Sunday, January 27 – so if you’re quick, you might also be able to nab yourself a canny deal, as well as some top-notch ethical grub.) 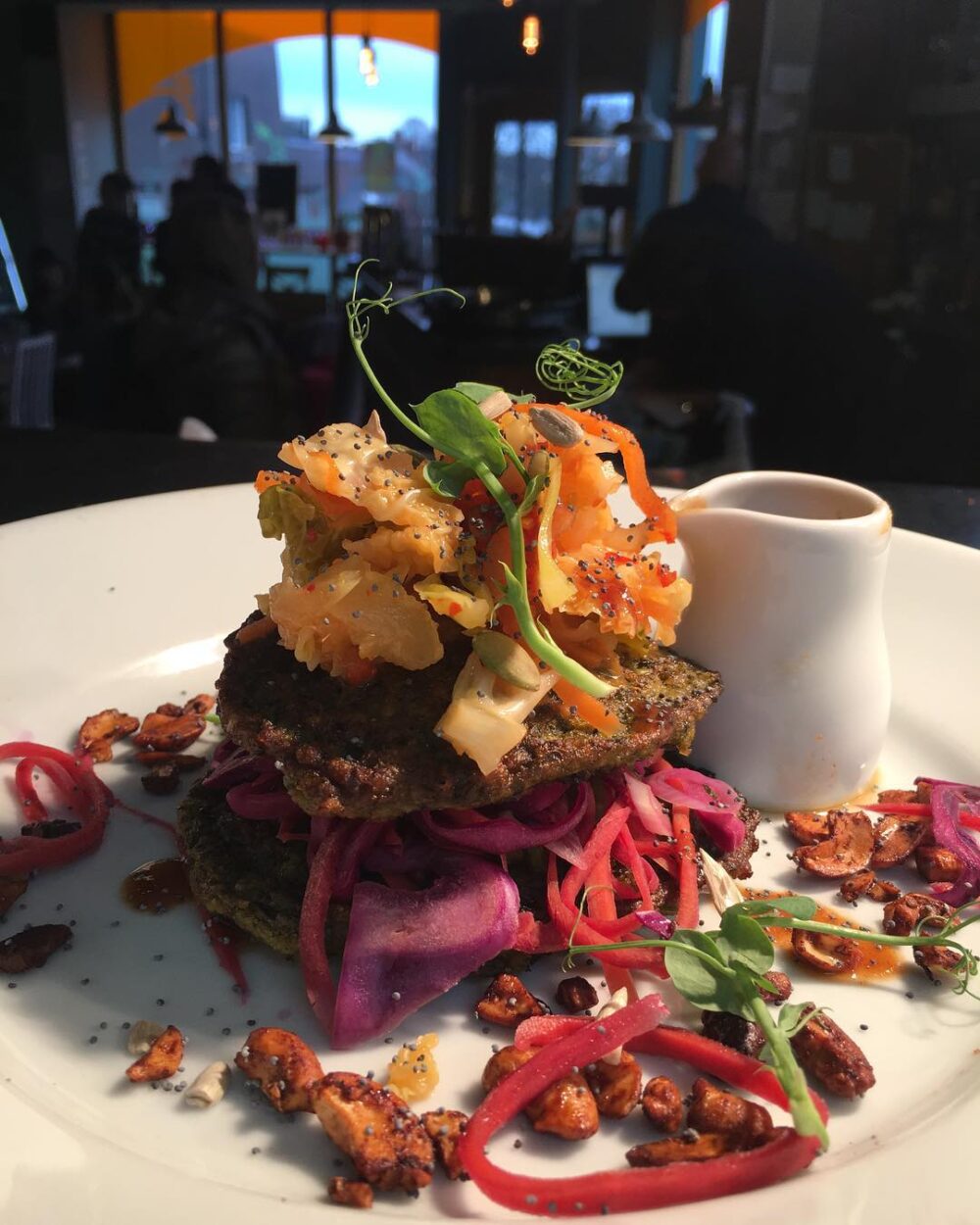 Little Green Social, Goldspink Lane, Sandyford
Since opening in the summer of 2018, this family run cafe, bar and health food shop – which also loves making space for a range of events, workshops and general merriment – has won itself many fans.
Offering a menu which is packed with homemade, imaginative and frankly lip-smacking delights (the Christmas offering was tremendous) including curries, stir fries, soups, salads, pizzas and hearty dinners, the Little Green kitchen is committed to using locally-sourced and organic ingredients wherever possible. Ooh, and they reckon they’ve just mastered the towering challenge of making a vegan Yorkshire pud.
They also boast a range of local craft ales, cocktails and a dessert display cabinet which you may well find your face pressed up against.
www.littlegreensocial.co.uk

Super Natural, Grainger Street, Newcastle
Named in homage to the first dedicatedly veggie and vegan restaurant to grace the streets on Newcastle in the seventies, Super Natural can be found serving up wholesome and homemade vegan cuisine – to say nothing of an array of unbelievable cakes – at the bottom of Grainger Street.
Boasting an ever-changing menu and a crowd of special events, this is a place to keep on your radar whether you’re looking for breakfast, lunch, afternoon tea treats or – on Fridays and Saturdays – an evening meal.
Visit their Facebook page for more information or bookings. 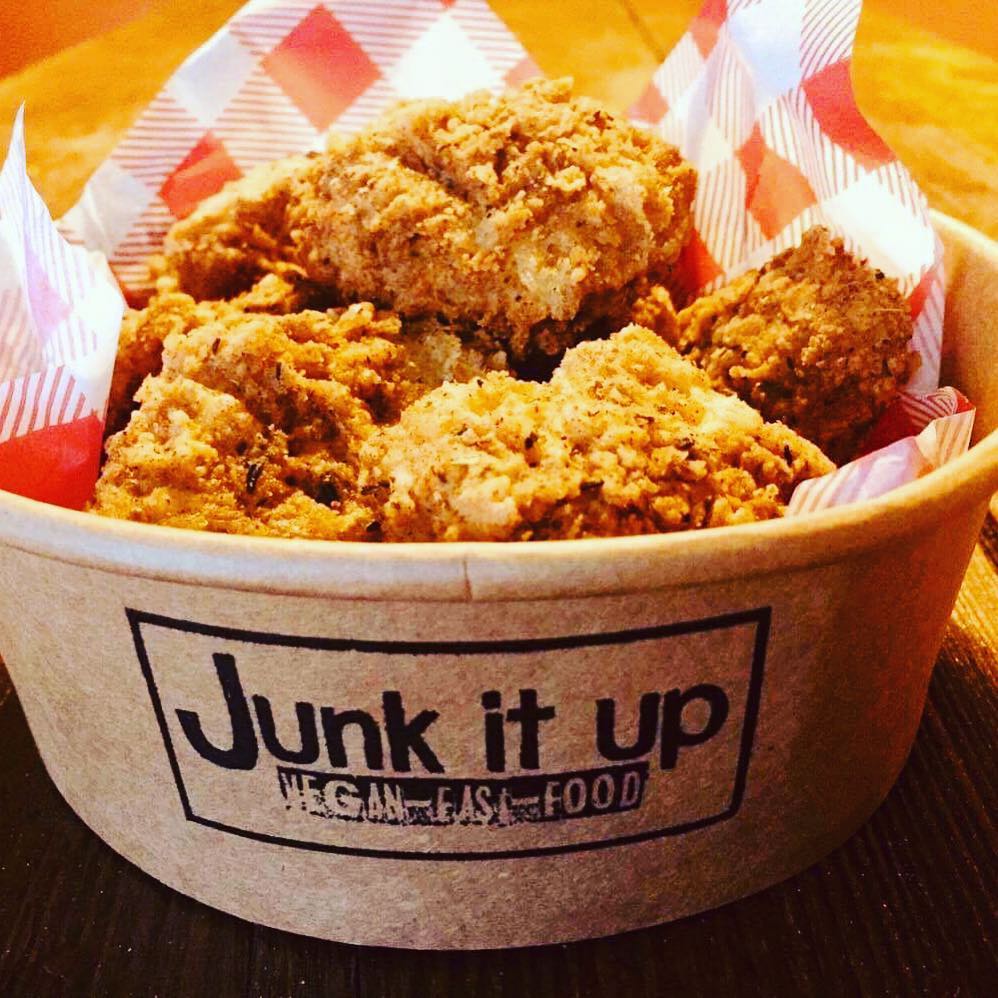 Junk It Up – Vegan Fast Food Bar, Pink Lane, Newcastle
Formerly The Bohemian, which bagged the Vegan Restaurant of the Year Award in 2017, Junk It Up promises – and delivers in all senses of the word – everything you would expect from a fast food joint, while leaving the meat and dairy firmly at the door.
From Southern Fried Fricken and Piri Piri kebabs to Tex Mex burgers, a variety of loaded fries and Jumbo Chilli Dogs, we defy anyone not to find something naughty to love in this place.
Meanwhile if you find yourself in the East End of the city… they also have a little sister Junk It Up (although to be fair, she was there first) on Shields Road in Byker. Both offer delivery to an ever-increasing array of postcodes and online ordering too, so you don’t even need to get out of your slippers.
www.junkitup.co.uk

Karma Kitchen, Bigg Market, Newcastle
If what you’ve missed most in Veganuary is a takeaway curry, then look no further than Karma Kitchen, who will gladly deliver wholesome, freshly prepared vegan Indian food to your front door.
You’ll never look at tofu the same way again once you’ve tried their Tofu Tikka Masala and just because it’s meat and dairy free doesn’t mean you can’t have spicy chips and a naan on the side.
www.karma-kitchen.co.uk 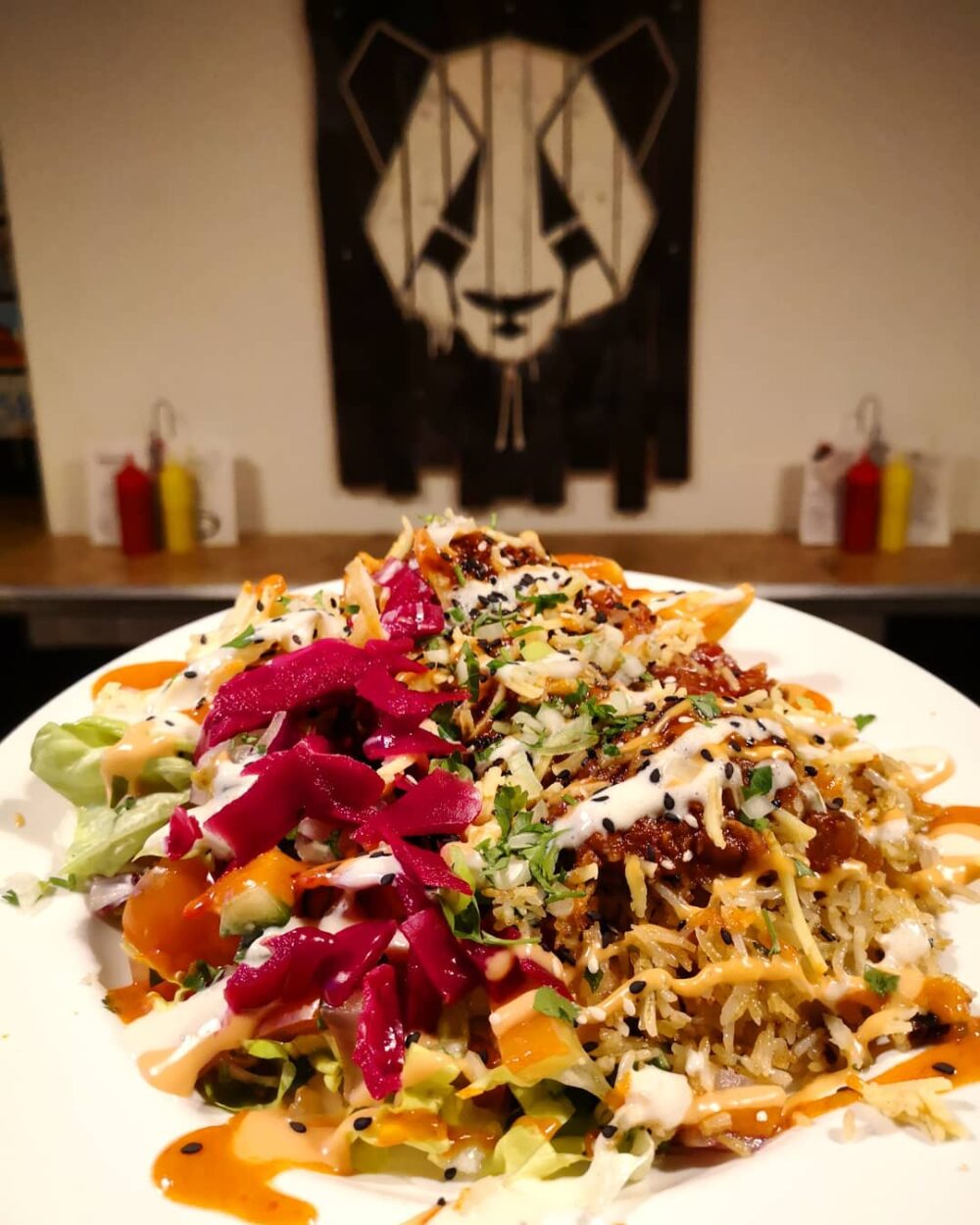 Grumpy Panda, Regent Terrace, Gateshead
Struggling to find a better way to describe these big bears than their very own strapline: The North East’s first American-style vegan diner – and Gateshead’s first 100% vegan eatery to boot.
After introducing themselves to the world as an events catering outfit, it quickly became clear that the Grumpy Panda menu deserved a permanent home. Smack in the middle of Gateshead town centre.
As any sensible North East vegan will tell you, the existence and increasing availability of the, shall we say, more naughty-type foods, which still allow you to stick to your principles, is something to be royally celebrated – and Grumpy Panda have been at the forefront of this mouthwatering movement.
Rib Dogs, Dirty Fries, Pigless Pudding, Eggz and Baecon, heaps of ‘slaw, Mac and Cheez, Burgers galore… we could go on. The list of brekkie, lunch and dinner delights without an animal in sight is simply glorious.
Helpful hint: As well as their Regent Terrace HQ, you can also find the Grumpy Pandas down at the wonderful By The River Brew Co on the Gateshead Quayside on Fridays, Saturdays and Sundays. In addition, they’ve just unveiled a shiny new ‘silver bullet’ catering trailer, so look out for them everywhere there’s food to go.
www.grumpypandafood.com

Hungry Vegan @ Stack, Pilgrim Street, Newcastle
If you’re craving a kebab you’re in for a treat at the Stack on Pilgrim Street.
You don’t need to be remotely vegan to enjoy the freshly made subs, kebabs, nachos, hot dogs, pasties and cakes available at the Hungry Vegan, but you might want to make sure you’re hungry.
Their signature Big Dogs are aptly named and you can upgrade any of the hearty subs to a foot long feast for only £2. Epic.
www.facebook.com/hungryveganuk 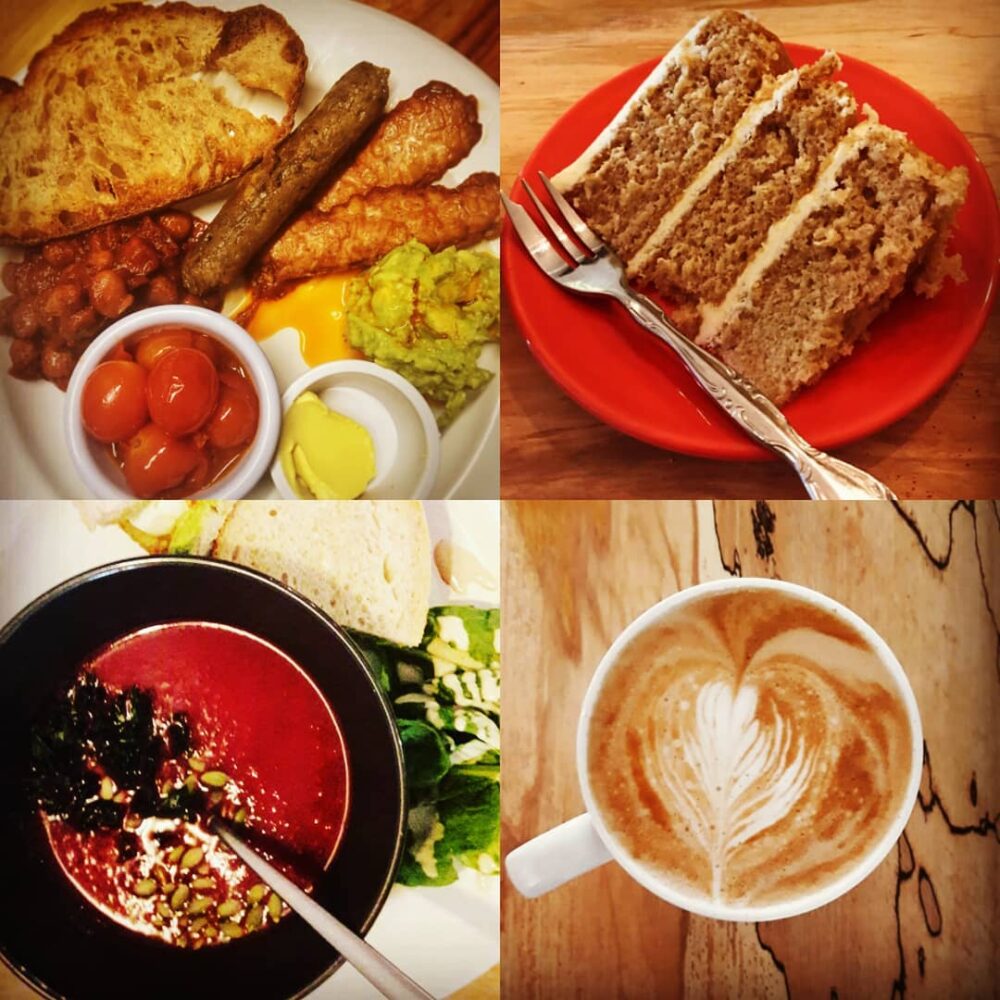 Shoe Tree Cafe, Heaton Park Road, Heaton
Find yourself running out of ideas for vegan breakfasts?
Get along to the Shoe Tree Cafe in Heaton and gorge yourself on their incredible peanut butter pancakes; completely plant based and therefore the only way we can think of to have a 1000-calorie start to the day without feeling remotely guilty.
They also have loads of fun events scheduled, such a charity clothes swap on January 29 for starters. But before that, ask them about their £10 Fill Your Boots Veganuary Special.
www.facebook.com/shoetreecafe/ 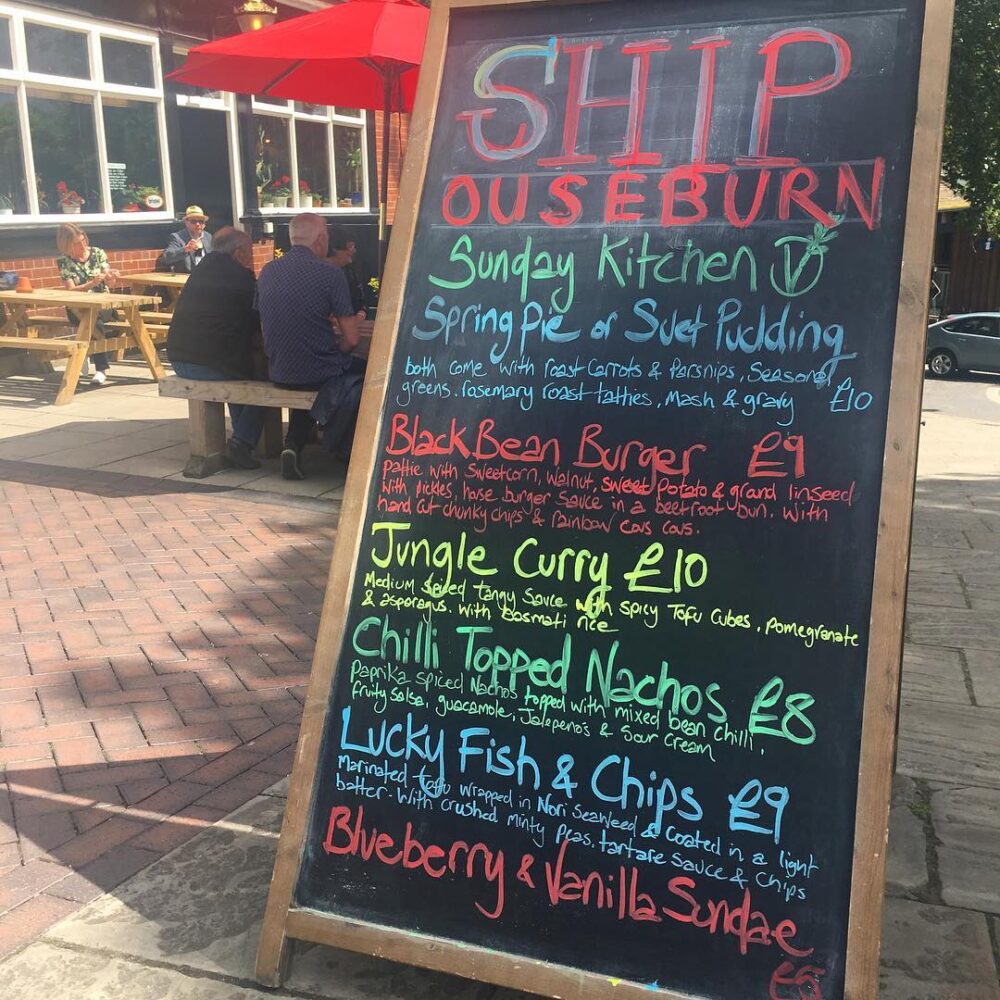 The Ship Inn, Stepney Bank, Ouseburn Valley
An absolute cracker of a family friendly pub, The Ship serves up an array of real ales and cask ciders alongside a 100% vegan and 100% lovely menu of food to make even the most committed of meat eaters lick their lips. This is a pub which wears its plant-based leanings on its tasty sleeve and welcomes dogs like they were a long lost relative. It’s a total treat to visit. And the Sunday Dinners are the stuff of dairy-free legend.
This is a must for those looking to sidestep any animal products – and a ‘you really should try it’ for anyone else.
www.facebook.com/shipouseburn

So, there you have it, Veganuary fans. A suggestion for every one of the six days that remain until the month is done and dusted. But remember, veganism doesn’t just have to be for January…