Vic Reeves at the Biscuit Factory 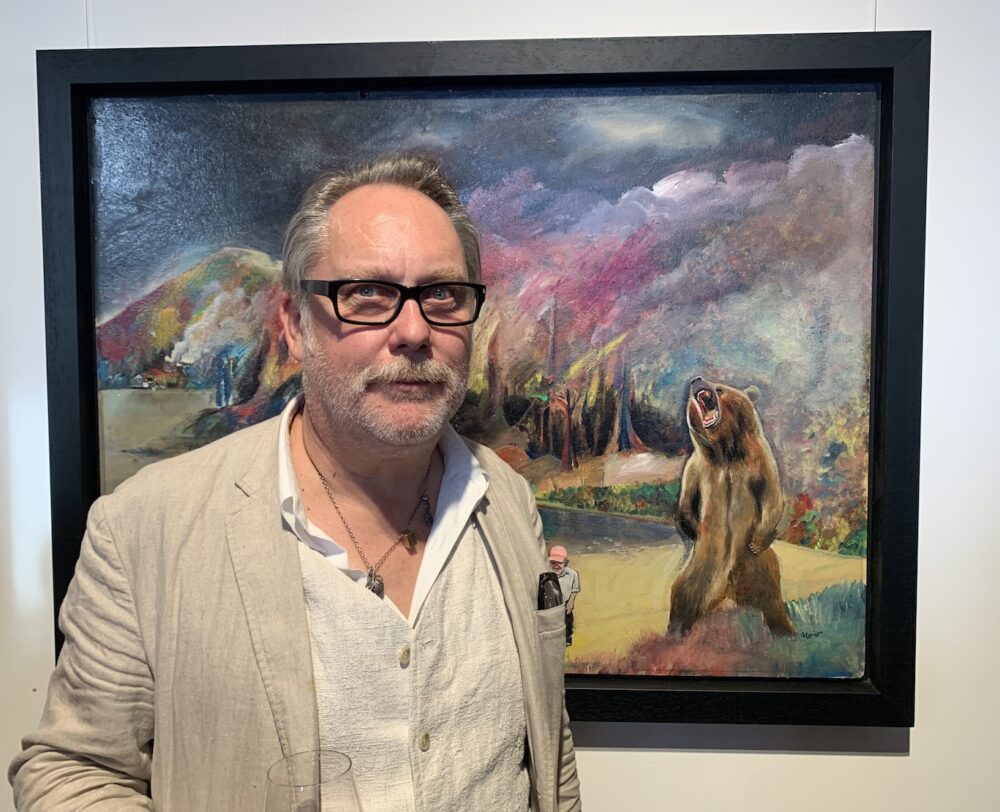 Jim Moir aka Vic Reeves at the Biscuit Factory, Newcastle

There is wine, there is Turkish Delight and beside us on the wall at The Biscuit Factory is a small picture called (those of a sensitive nature, look away now) Maria Callas Pubes.

It shows a specimen jar, or it could be an ordinary jam jar, containing a neat little stack of black hairs.

The apostrophe police might question whether this is meant to be an ink drawing of the actual pubic hair of the great operatic soprano (1923-77) or merely a representation of pubic hair of the Maria Callas type.

The time allotted for my interview with the artist, described throughout the exhibition as ‘Jim Moir aka Vic Reeves’, doesn’t allow for the probing of grammatical niceties. We’re talking pubes.

“I did a big collection of pubes in jars,” says Jim (aka Vic), white suited, glass in hand and in that deadpan voice which makes you wonder how serious he’s being.

“To be honest, I don’t think Obi Wan Kenobi has got any pubes at all. I just gave him the one.

“I’d imagined her as this great classical opera singer in Vienna or somewhere letting them grow quite long.”

He pauses ever so slightly, the ghost of a smile flickering.

“I don’t know why I thought that.” 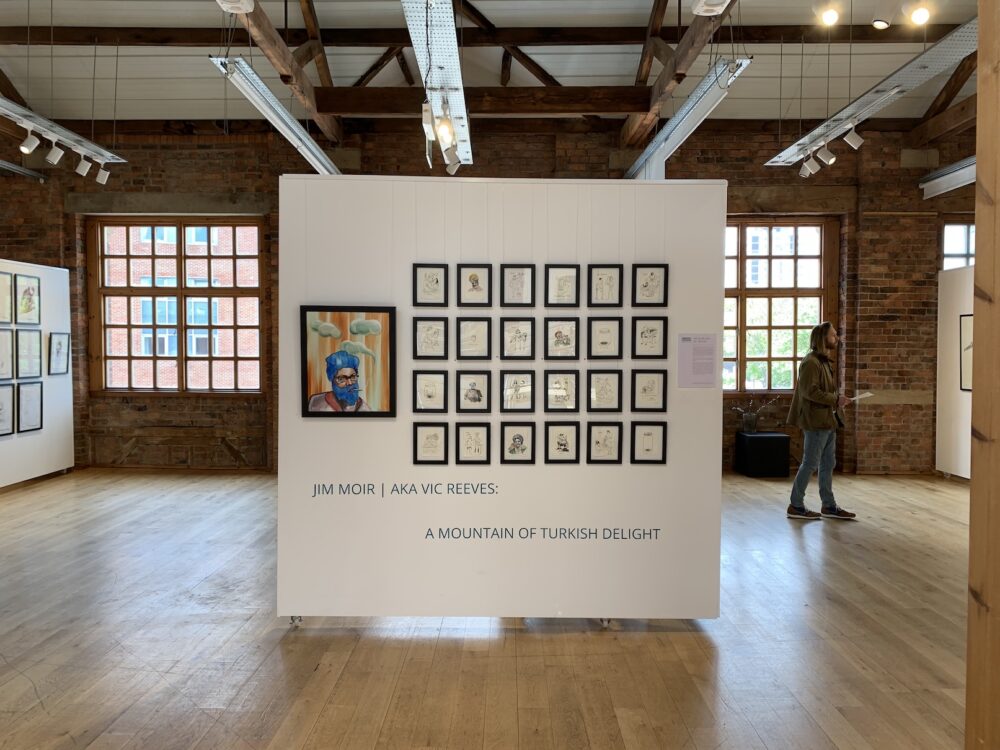 He remembers a visit to Blackpool when he was young. There was a museum which had a corner set aside for the sort of grim curios likely to appeal to lads like Jim Moir.

“I must have been about 12. This museum had a sinister area full of strange stuff. I thought the pubes in jars would be great for a museum like that. I’d go and see it.”

Jim says he went to more conventional institutions too.

“I grew up in a family where we were constantly going to art galleries. My mum painted and my dad made weird sculptures.

“That was the environment I grew up. It was just what we did. I was nurtured, if you like, by my mum.

“I used to spend all my time in my bedroom drawing and painting. I suppose nowadays kids do things on computers but I used paints and paper.” 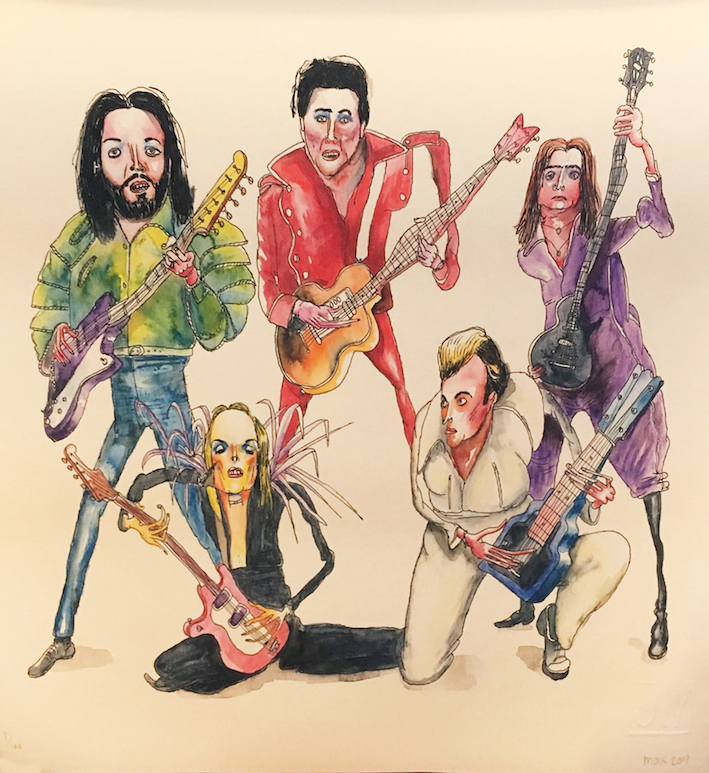 Darlington was his youthful stamping ground. When in his teens he said he wanted to go to art school, his dad said he should get an apprenticeship and work in a factory.

Jim (Vic) says he hated it but is “kind of glad” he did it. “I saw a lot of stuff and experienced some stuff which informed me for the rest of my life.”

He finally got to art school in his early twenties and art has been a large part, probably the largest part, of his life ever since. The absurdist humour, the music, the television fame… all have spun off it.

He recalls his pop star lifestyle in the early 1990s. “We were on tour doing the Big Night Out and we’d have kids chasing us down the street like The Beatles. But we were quite aware it was all going to finish tomorrow.

“We did a new Vic and Bob’s Big Night Out for TV and that was a big success, and we’re doing another one this year.

“But this,” he adds amid his madcap art, “is more a part of me than that.

“We used to have an office, me and Bob. We don’t any more. We sit in our kitchen and I do all the artwork.

“That’s the way it’s always been. I make the props.” 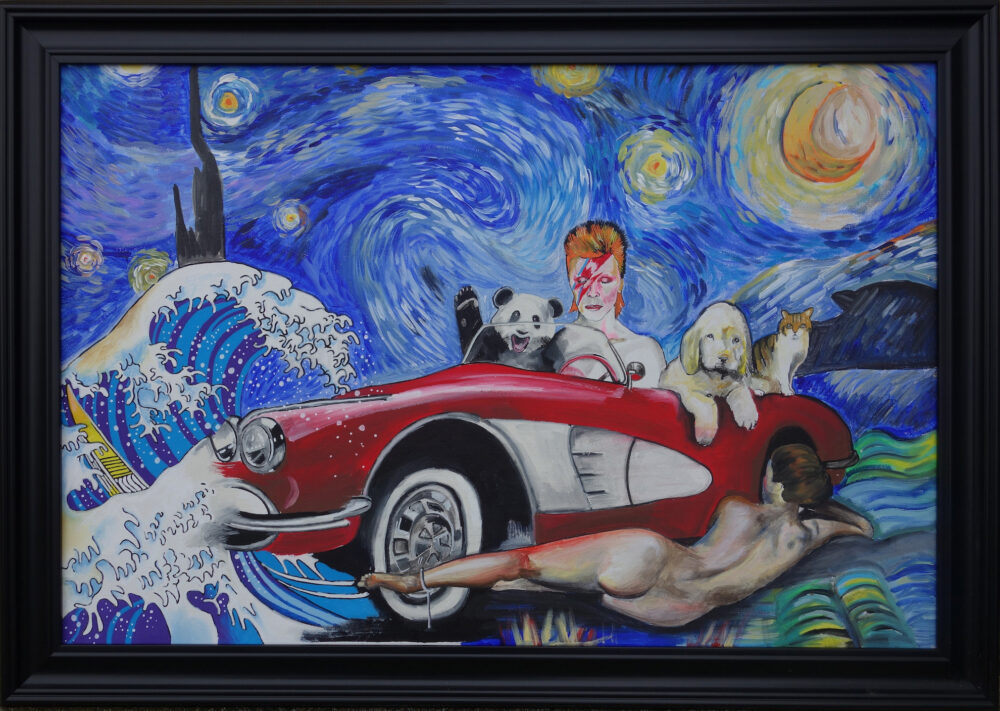 This exhibition, as well as being a result of Jim’s love of art, is also an illustration of his deep need to do it.

All the stuff on the walls at The Biscuit Factory, he insists, is pretty much the result of a year’s work.

“I never stop,” he says. “I don’t hang around. I like doing everything at high speed and if I start working on something, I like to finish it at least in one day.

“I woke up at five o’clock this morning. I’d had an idea and just wanted to do it.” 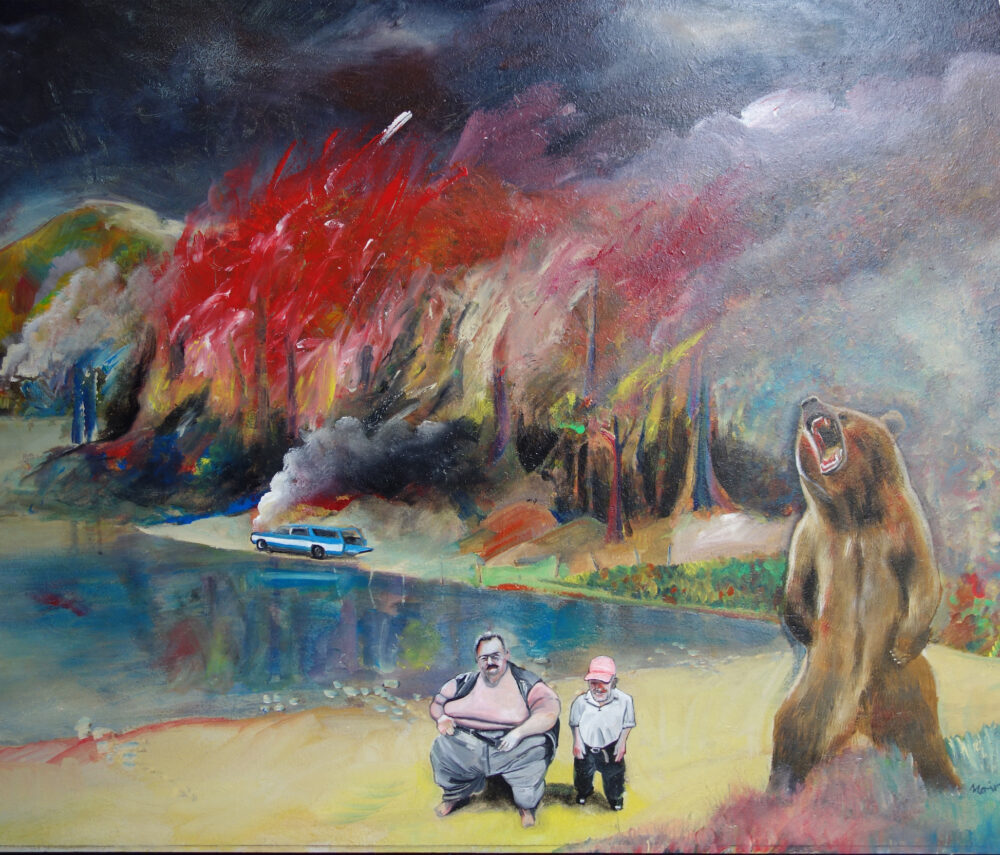 As you’ll see, he uses pencils, inks, watercolours, you name it. “Yes, everything. I have even gone back to oils in the last couple of years although it is a bit of a drag because it takes longer.”

Jim tells me he still reads a lot of books – “most art students don’t” – and still goes to a lot of galleries.

He also has a collection of art amassed because he and his many artist friends exchange gifts. Given that these friends include Damien Hirst and other Turner Prize winners, it might be worth quite a bit.

Celebrity sells. That must be the reason for the ‘Jim Moir aka Vic Reeves’ exhibition labelling, although I notice that each individual picture is signed simply ‘Moir’ plus the date.

Jim is wise to the unforgiving ways of the art market. 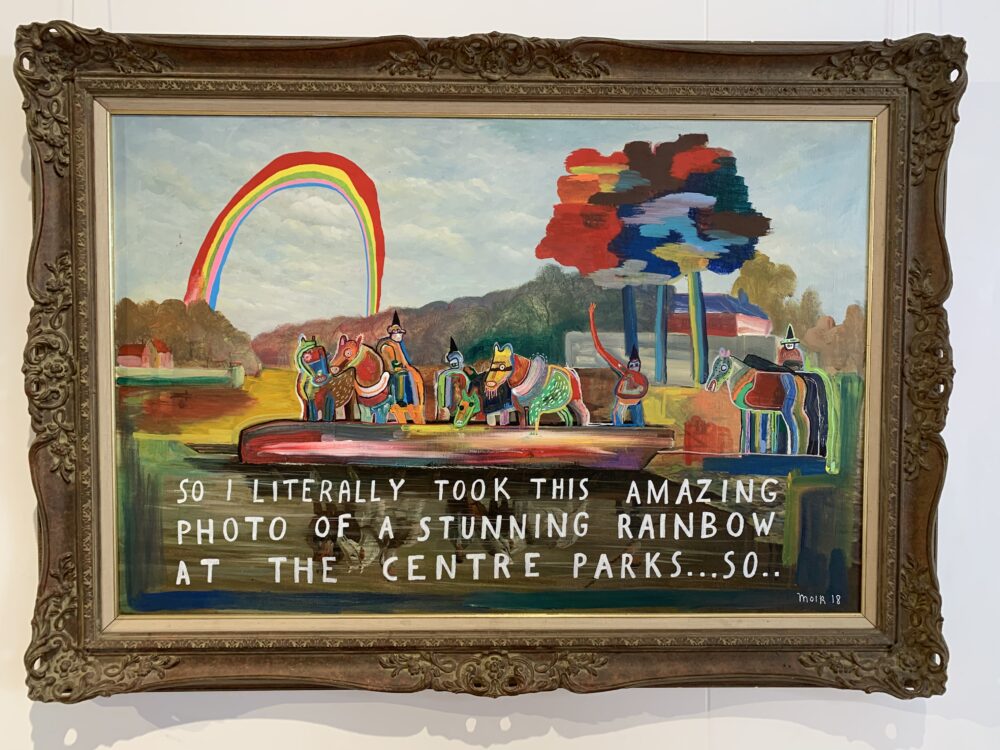 “It ebbs and flows like mud. I might have some Damien Hirsts which are valuable one day but the next day might not be. It’s just the same with pop music.”

The Biscuit Factory will be hoping there’s demand for the creations of their current star exhibitor.

On offer is a wide range of delights. Along with the Pubes series (£300 apiece) are little portraits of Ena Sharples, Bet Lynch and Elsie Tanner (£350), a series called Sexy (£300) and portraits of Roxy Music (choose a signed print for £275 or the original painting at £2,900).

It’s my guess the titles will entertain as much as the pictures. 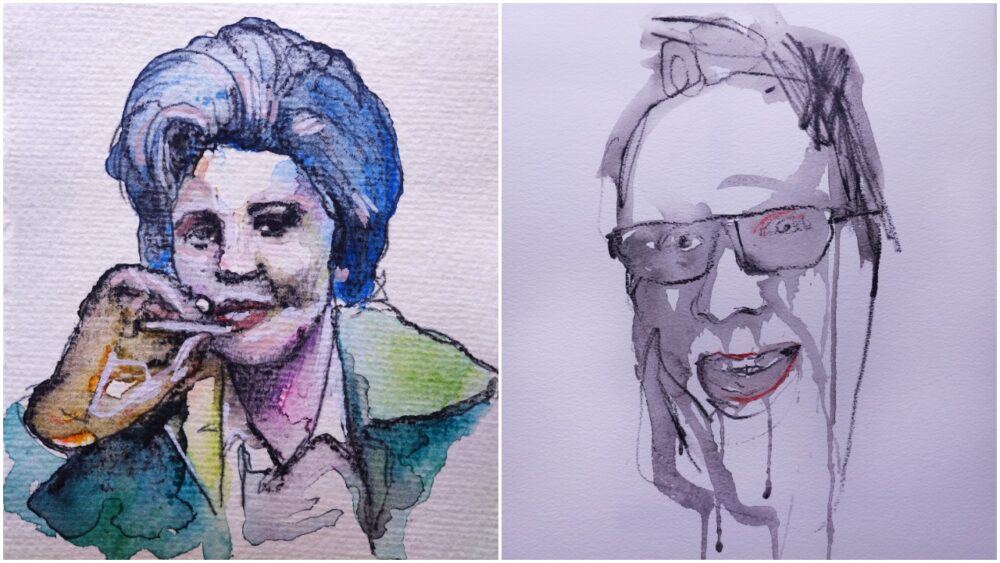 Here are Batman with Pooing Dog (£1,200) with its partner piece, Cat Woman with Pooing Cat (same price), Ant McPartlin Post Gym on his Horse with a Bomb (£3,000), a rather garish canvas hung for some reason at knee height, and – my favourite – Henry VIII Taught the Widow to Fly and Then Flew Around Hastings Harbour Pissing on Things (£1,500, for which, you have to admit, you get a lot of title).

“I must go and meet my public,” says Darlington’s most famous Renaissance man grandly.

And I am left idly wondering whether Maria Callas Pubes, with its luxuriant pile, constitutes a better £300-worth than Obi Wan Kenobi with its single, rather mean and lonely hair. That’s what the art market does to you.

A Mountain of Turkish Delight by Jim Moir aka Vic Reeves is at The Biscuit Factory, Stoddart Street, Newcastle NE2 1AN, until May 19. Details: www.thebiscuitfactory.com

Back to articles
« Review: Voltimand and Cornelius are Joyfully Returned at People’s Theatre Studio
Review: Floorboards at Alphabetti Theatre »
Share on
Share on