Erica Whyman, one of the leading lights at the RSC, was back in Newcastle to open a new chapter in the history of the People’s Theatre, as David Whetstone reports. 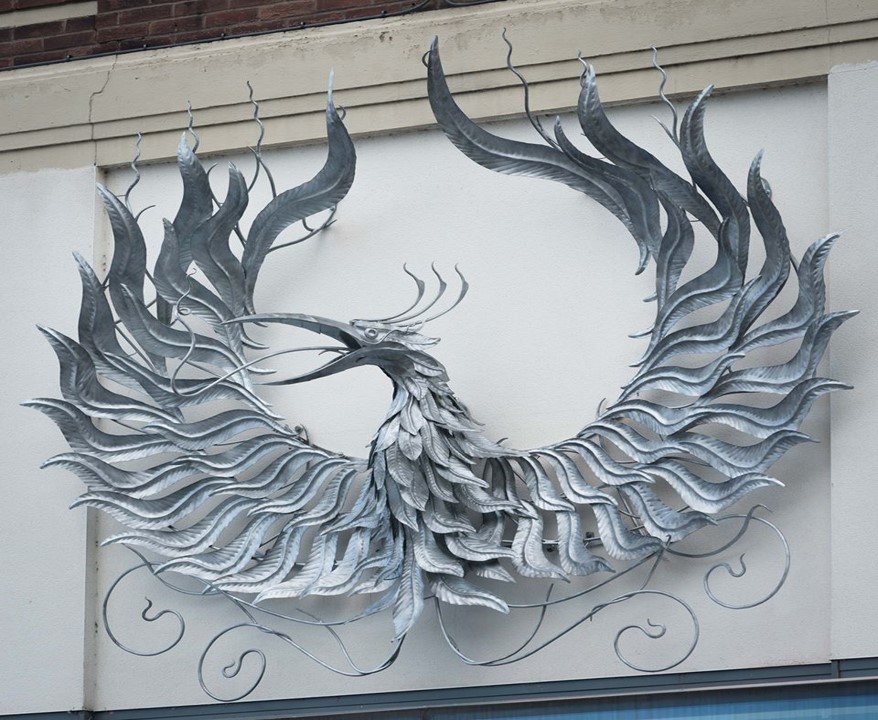 The Phoenix at the People’s Theatre in Newcastle

It has had many celebrated guests over the years but Erica Whyman, deputy artistic director of the Royal Shakespeare Company, is the first to be named on a plaque in the new foyer of the People’s Theatre.

Erica, who ran the professional Northern Stage theatre company and venue in Newcastle from 2005-12, returned to the city to officially open the new foyer and studio theatre at the People’s.

In the RSC’s People’s Play project, a touring production of A Midsummer Night’s Dream to mark the 400th anniversary of Shakespeare’s death in 2016, the Newcastle-based company provided one of the amateur sets of ‘rude mechanicals’ to perform alongside professional actors.

The 84 amateur actors from around the country “blew everyone away”, declared Erica.

It was indeed hard to distinguish amateur from professional when the production was performed at Northern Stage and again later in Stratford.

But as Erica suggested, the distinction can be a fine one with all dedicated to the process of creating magic.

As those well versed in the 108-year history of the People’s will know, some of the theatre world’s most distinguished figures – George Bernard Shaw, Dame Sybil Thorndike, Sir Ian McKellen among them – have been keen supporters.

Writer Sid Chaplin became president in 1976 and the position is now held by his son, Michael, who writes for stage, screen and radio.

Erica said she admired the “tenacity, courage and ingenuity” of the People’s in embarking on its ambitious £1.5m redevelopment programme.

She thought it typical of the creative spirit to be found in Newcastle where she had enjoyed eight of her happiest years. 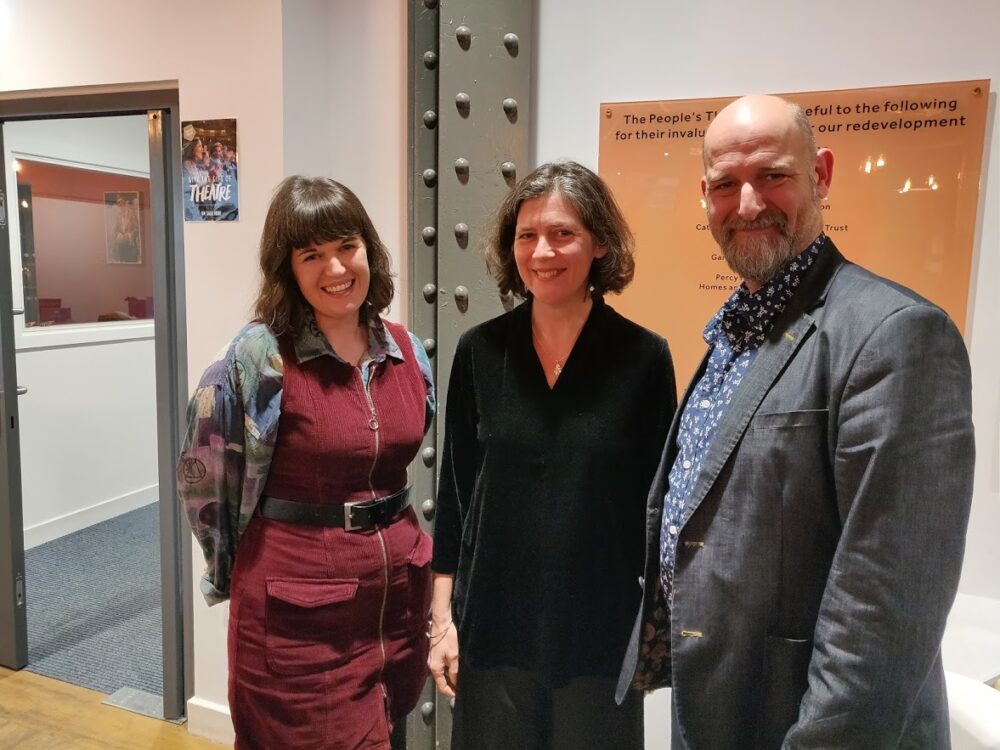 “This city understands how the theatre works in people’s lives,” she declared. “I found a real belief here that the arts can make a difference.”

The audience in the new studio theatre saw a film about the making of the dramatic phoenix sculpture which now perches above the new entrance.

Erected in the summer, the metal sculpture – a reworking of the People’s logo which was adopted in 1929 – was made by artist blacksmith Stewart Dives, of The Forge, Whitehouse Farm, Stannington, and trainee Rhiannon Wilson who has also worked as People’s publicity manager.

The new-look phoenix replaces the one designed in 1960 after the People’s company had decided on a move from Rye Hill to its current home in Heaton, formerly the Lyric Cinema.

This 21st Century bird logo was designed in Newcastle by JUMP design studio which is also responsible for the distinctive People’s Theatre posters.

Tony Childs and Steve Appleby, who headed the redevelopment committee, left the audience in no doubt that a long and difficult road had been travelled.

With an upstairs studio that wasn’t fully accessible and which couldn’t be used when the main house was occupied, something had to be done and various options were considered, including building a new theatre on one half of the current plot and selling the other.

The solution that won the day was to cost an estimated four times the annual turnover of the theatre, prompting a sharp intake of breath and much discussion.

A fund-raising campaign was launched in 2011 but, as Steve said, nobody realised at that stage that it would all take so long.

Various hitches along the way included an inconveniently positioned build-up of underground water, but the job was done eventually with the help of a host of sponsors and supporters, all acknowledged on a wall panel.

The extensive foyer, with its new bar and welcoming glass frontage, was ready for the 2016 Christmas panto. The new and fully accessible ground floor studio opened in February this year with a production of The River by Jez Butterworth. 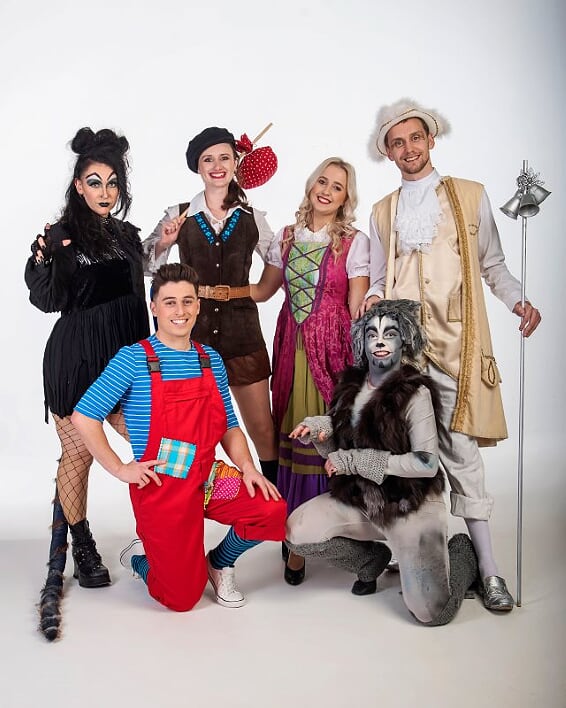 So a new chapter begins. This year’s panto, Dick Whittington, written by Philip Meeks, runs from December 7 to 15, to be followed by the traditional January murder mystery, Dial ‘M’ for Murder.

Then in February, in the studio, comes The Seven Acts of Mercy, Anders Lustgarten’s play named after and inspired by the painting by Caravaggio.

It is set in 17th Century Naples, where the artist is working on his first masterpiece having killed a man and fled from Rome, and in present day Wallsend (relocated from Merseyside for the People’s production) where a boy and his grandad face eviction.

Erica was delighted to see a short excerpt performed. She directed the play’s premiere at the Swan Theatre in Stratford in 2016.

The People’s Theatre, with its dramatic phoenix logo, now rises to the challenge of a potentially exciting 2020.

Don’t imagine, though, that the behind-the-scenes work is all done. Next up is a makeover of the actors’ dressing rooms – although for the time being they’ll have to put up with what they’ve got because the shows, of course, must go on.

For details of what’s on and to book tickets, go to www.peoplestheatre.co.uk

Back to articles
« Review: Beauty and the Beast at Newcastle Theatre Royal
Review: The Snow Queen at Northern Stage »
Share on
Share on