An extraordinary artist merits a weekend of celebration in Newcastle. David Whetstone meets the man who has made it happen. 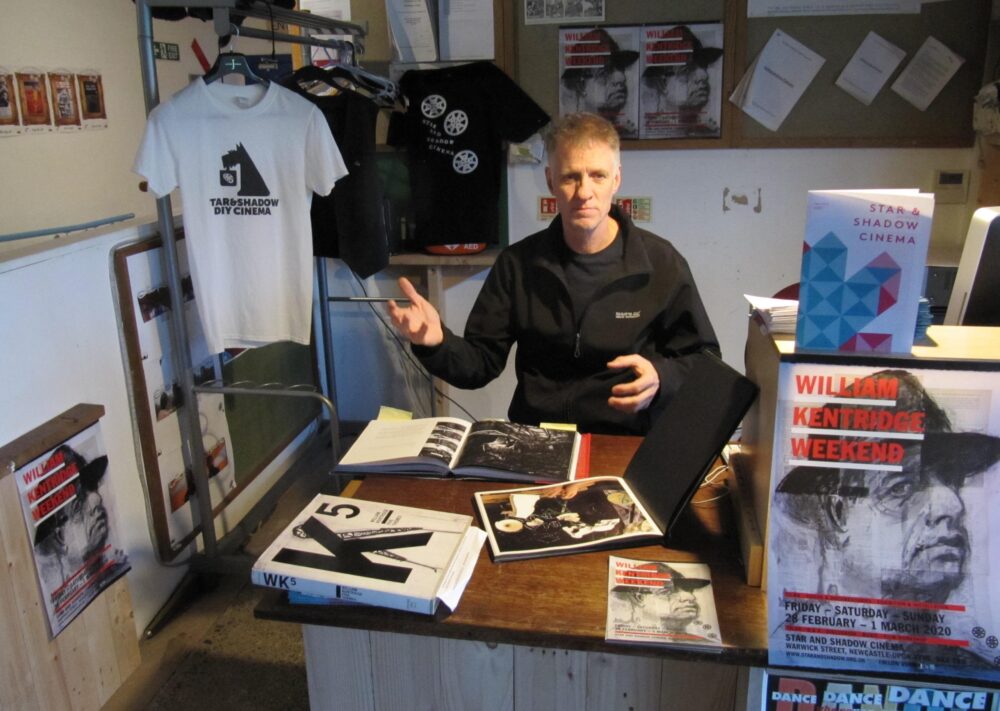 Willy Houwen at the Star and Shadow in Newcastle

You might not have heard of William Kentridge. Dutchman Willy Houwen hadn’t when he was persuaded to pop into an art exhibition in Amsterdam in 2012.

“I’m not an art connoisseur,” he says. Neither was he ever an avid gallery visitor.

But he recalls someone telling him there was an exhibition in the Jewish Historical Museum and urging: “Go and have a look. It’s quite interesting.”

“I went to have a look and I was blown away.”

He remembers mesmerising films on TV screens, each alluding to aspects of South Africa’s troubled history under apartheid but made in an extraordinary way with animated charcoal drawings.

They were from the series 10 Drawings for Projection in which the artist created movement with a single charcoal sketch, adding, erasing and re-drawing – and all the while filming.

The result is a sequence of rich, fluid and beguiling narratives reflecting the violence and beauty of the country where William Kentridge was born 64 years ago into a Jewish family.

His parents, both lawyers, earned a tricky living defending victims of apartheid before they moved to London in the 1970s.

Sir Sydney Kentridge QC, now aged 97, helped to defend Nelson Mandela and others at the infamous treason trial of 1958-61 in Johannesburg (at which they were acquitted).

He is not, as Willy points out, an artist you can pigeonhole. “He makes all kinds of things – charcoal drawings, videos, sculptures, installations. He also went to drama school. His art has lots of layers.” 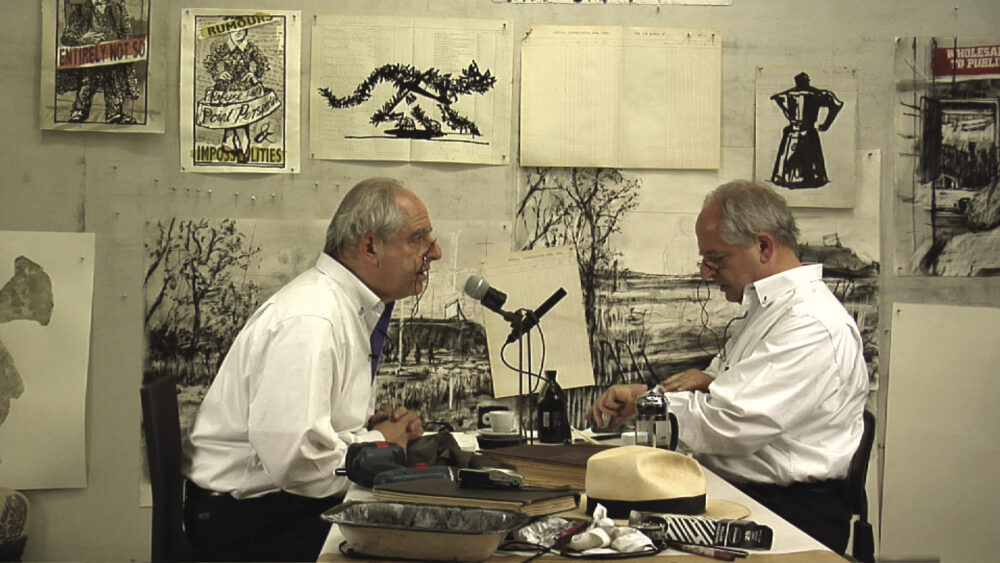 Artist William Kentridge in his studio

Recently Willy went with partner Judy to see a live streaming of Wozzeck, by New York’s Metropolitan Opera, at the Tyneside Cinema. The music wasn’t to their taste but Kentridge designed the sets.

You will be able to judge the merits of this renowned artist’s work at a William Kentridge Weekend, coming up at the end of February at the Star and Shadow Cinema in Newcastle.

For Willy and Judy, getting this ambitious project off the ground has been a labour of love in more ways than one.

The pair met through music. Judy, formerly head of Hawthorn Primary School in Elswick, which made headlines for its In Harmony project with Sage Gateshead and musicians of Royal Northern Sinfonia, used to play in Newcastle’s Tenth Avenue Band. Willy played trumpet in a band in Amsterdam.

Performing together in a big street band festival in 2003 sparked what was a long distance relationship until Willy, an architect, lost his job after the 2008 financial crash and moved to the North East to be with Judy.

In 2017 he became involved in the volunteer-run Star and Shadow, mucking in to do whatever building work was required as they developed a new site on Warwick Street. It reminded him of similar creative community ventures back in Amsterdam.

It is “a dream” for him, he says, and a chance to share his Kentridge passion with others. 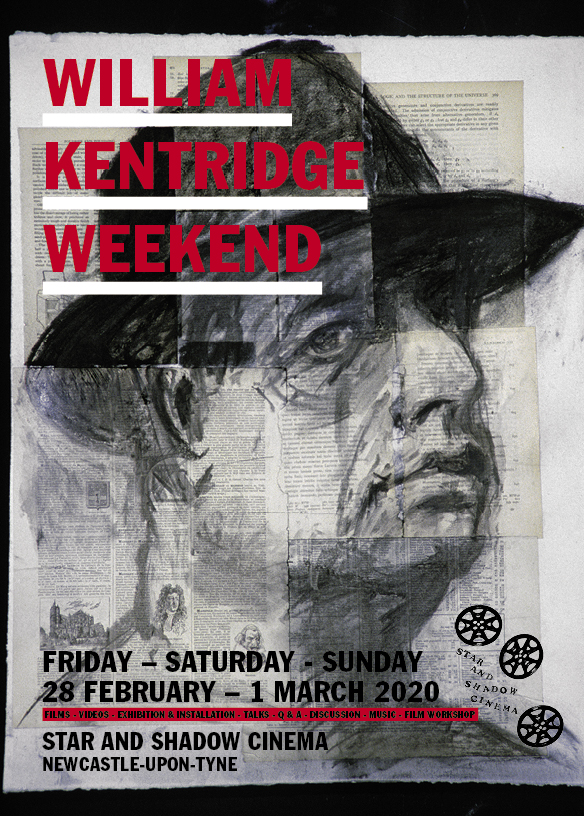 The Kentridge Weekender at the Star and Shadow Cinema in Newcastle

To make it happen he has contacted galleries in Amsterdam and South Africa, notably Kentridge’s non-commercial Centre for the Less Good Idea in Johannesburg where artists and performers gather to collaborate and try out new work.

The artist’s team has been supportive of the festival, giving the enterprise its blessing and offering most of the material for free.

Judy and Willy successfully applied for a Propellor award from the Northern Film Hub (led by the Tyneside Cinema and similar organisations in Manchester and Sheffield) which supports one-off events and film-related innovation.

They are using the money to hire the projectors needed to show some of the more ambitious Kentridge creations. Like most other Star and Shadow offerings, there will be heavy reliance on volunteers.

Willy found other Kentridge fans in the North East, notably Dr Ian McDonald, director of the Research Centre for Film at Newcastle University, who made a documentary about the artist in 2010.

In Melancholic Constellations: The Art of William Kentridge, the artist talks about his work in South Africa during apartheid and “post anti-apartheid” while others comment on his achievements.

Ian McDonald will take part in a Q & A session, as will Tom Hickey of the University of Brighton, who also worked on the documentary, and Willy’s friend Ferdinand De Jong who lectures at the University of East Anglia and has written about Kentridge.

Among other screenings will be an Imagine… documentary from the BBC, in which Alan Yentob joins the artist as he prepares an epic frieze to be installed beside the River Tiber in Rome, and The Head and the Load, Kentridge’s tribute to the thousands of African porters and carriers who served in the First World War.

The latter, commissioned as part of the 14-18 NOW centenary commemoration, was premiered at London’s Tate Modern in 2018.

Back in 2013 BALTIC Centre for Contemporary Art exhibited some drawings by William Kentridge. You might recall them.

If not, this – on the Newcastle side of the Tyne – is another gilt-edged opportunity to sample the work of an artist with the power to change a life. Willy Houwen can vouch for that.

“It has taken a year to put this together,” he says. “But I feel good about it, really excited.” He hopes others will too.

The William Kentridge Weekend is from Friday, February 28 to Sunday, March 1 at the Star and Shadow Cinema, Warwick Street, Newcastle NE2 1BB. Find details at www.starandshadow.org.uk