A play exploring the Miners’ Strike from all angles is taking Northern Stage audiences underground for a feast of a show. David Whetstone came back up to the surface to report back. 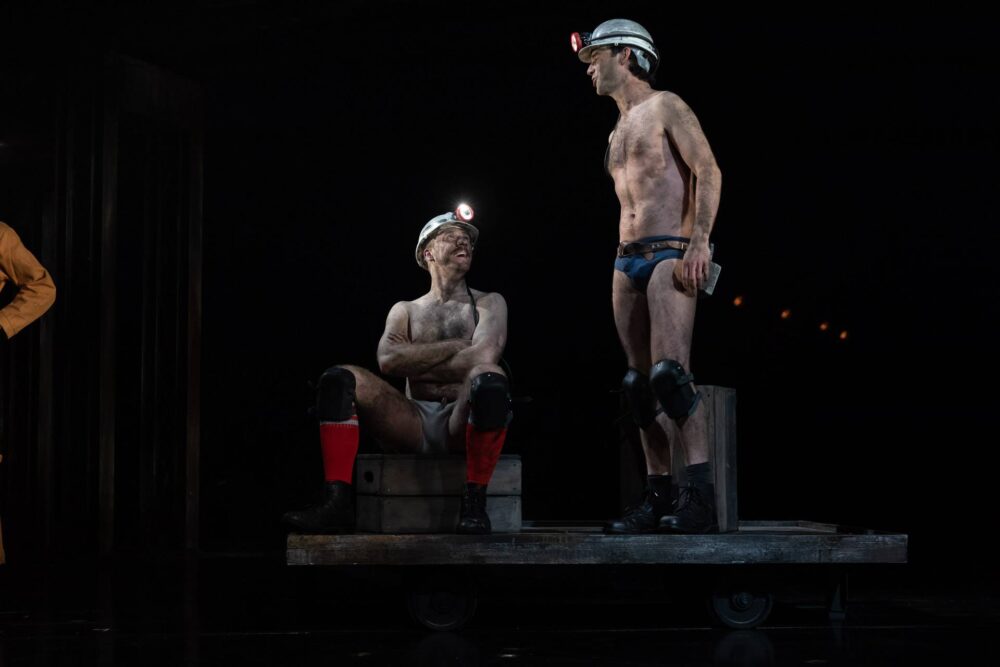 Nothing to do with Alice and her tumbling pursuit of a white rabbit but Beth Steel’s entertaining play – full of fun and food for thought – does take us deep underground.
It tells the story of the 1984-5 miners’ strike from different perspectives – politicians, police and, principally, the men whose jobs were on the line.
Kicking it off, though, is an economist. I sense your eyes glazing over… but stick with me.
Milton Friedman, the free market guru whose ideas shaped Margaret Thatcher’s divisive politics, puts in a brief appearance (played by multi-tasking Geff Francis) to explain that this is the story of an idea whose time had come.
It was one heck of a story, as you’ll remember if you lived through it. The tabloids portrayed it as Thatcher versus Scargill (that’s Arthur Scargill, pugnacious hard left leader of the National Union of Mineworkers). 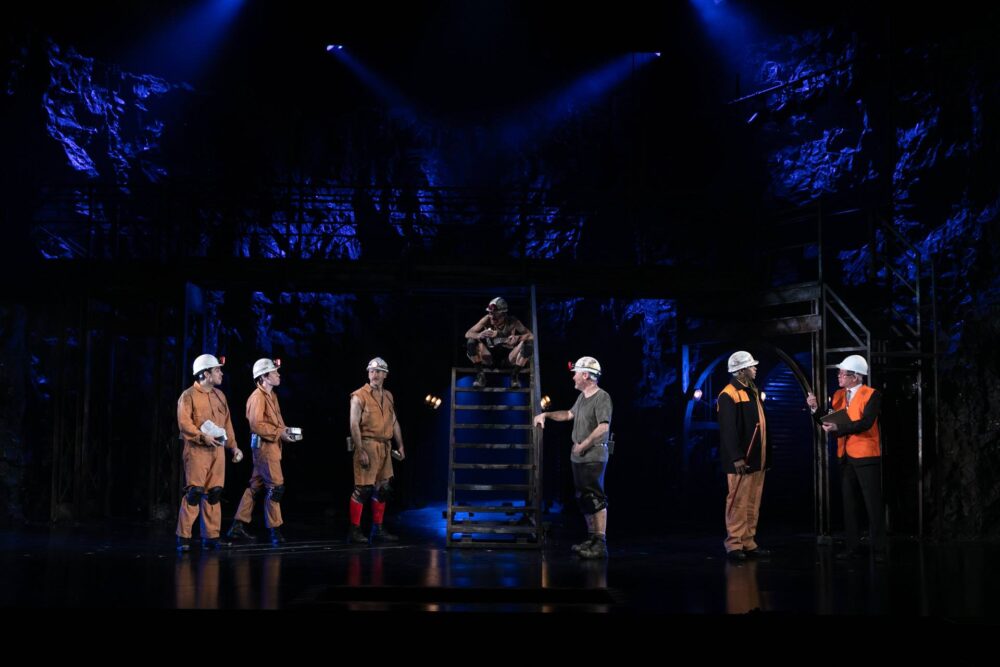 But neither of these characters appears in the play which is set in Nottinghamshire, where Steel’s father was a miner, and specifically the Welbeck Colliery which employed 1,400 men at its height.
We meet a few of them, starting with 16-year-old rookies Jimmy and Malcolm (Joshua Glenister and John Booker) who are following in family footsteps. We plunge into the depths with them in a metal cage, sharing their excitement and fears.
There to lick them into shape is Colonel, nicknamed for his commanding presence but played (superbly) by William Travis more as a grime-smeared sergeant major, jovially barking out safety advice and x-rated rebukes best kept underground.
Morgan Large’s brilliant towering black wall of a set, with its trio of tunnel entrances, gives a sense of the ever-present danger. The appearance of young miners Fanny and Spud (Jack Quarton and Nicholas Shaw) in their Y-fronts tells us that, yes, it’s hot down there.
Finally there’s Bobbo (Karl Haynes), gnarled, wiry, not a man you can imagine taking kindly to a call centre job. 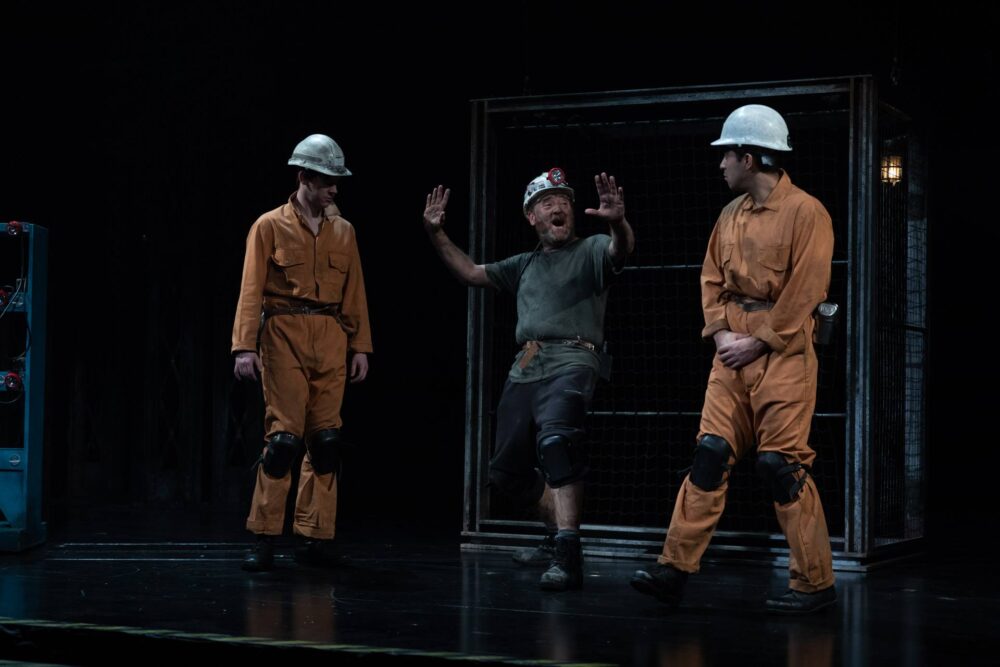 Then there are the suits. The play begins in 1983 with the appointment of American (though Scottish-born) industrialist Ian MacGregor to do to coal what he had done to steel – ruthlessly cut costs.
Robin Bowerman plays him with the necessary Stateside bluster. It is left to Energy Secretary Peter Walker (Paul Kemp) to rein him in and to despair when a photo of the National Coal Board boss with a bag over his head appears in all the papers – a “joke” that was misinterpreted.
Far from being a dour parade of facts, Wonderland, directed by Adam Penford, is full of verve. There are songs and movement routines, big numbers and moments of delicious comedy, as when a water cooler is taken underground to impress the visiting American.
There’s even a flash of male nudity as the miners shower on a gantry.
Adding a surreal touch – just as he did in real life – is Old Etonian and one-time avant garde film-maker David Hart who, bizarrely, was hired to persuade miners to return to work. 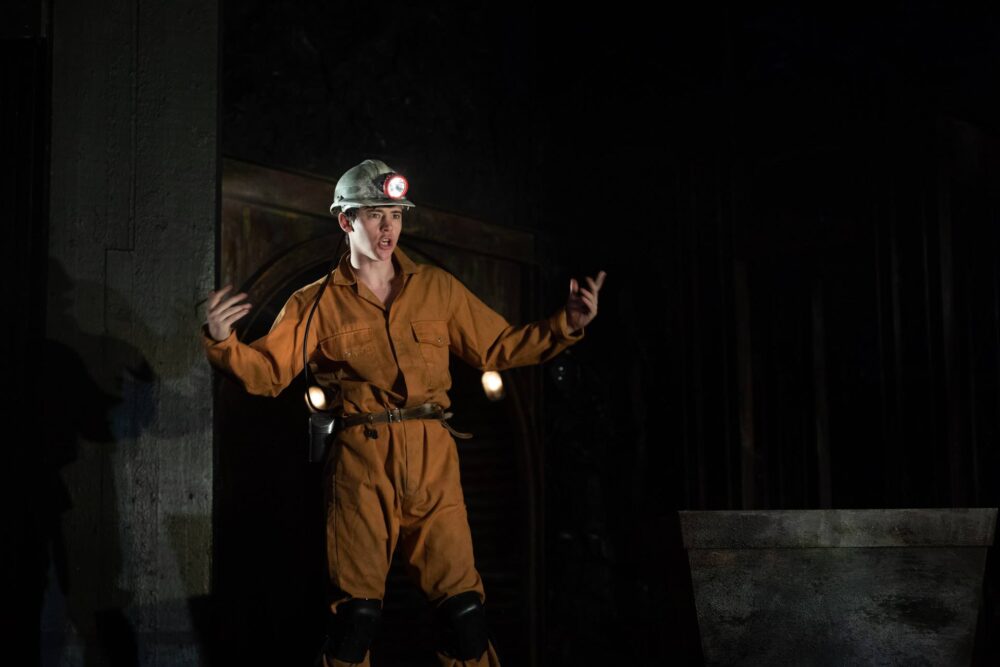 In Nottinghamshire, birthplace of the rival Democratic Union of Mineworkers, support for the strike was lukewarm, partly because the NUM leadership had opted against a national ballot.
One of the characters in the play defies the union command to strike and ends up as assistant to the outrageously flamboyant Hart who in one scene reclines on a chaise longue.
Nicholas Shaw clearly relishes the role although he also appears as the chief of the Metropolitan Police whose officers revel in being the iron fist in Maggie’s massive and massively expensive force.
The two sides, each thousands strong, famously clashed outside the Orgreave coking plant, near Rotherham, which is portrayed with a cast of 10 and some impressive props, including riot shields. The ramifications of that violent battle, resulting in many injuries and arrests, were long-lasting.
Wikipedia says the miners’ strike resulted in “a decisive victory for the Conservative government”. Only in a warped sense, though, could it be described in those terms.
Yes, it cowed the unions and paved the way for sweeping pit closures – as Scargill had warned it would – but the human cost was high. Many pit villages lost forever their sense of community and purpose.
It is important to remember – or to understand – what happened and this play does the job, clearly siding with the miners but presenting both sides of the argument in measured and palatable fashion.

Back to articles
« Signing up for the School of Improv
Review: Arcadia at The People’s Theatre »
Share on
Share on