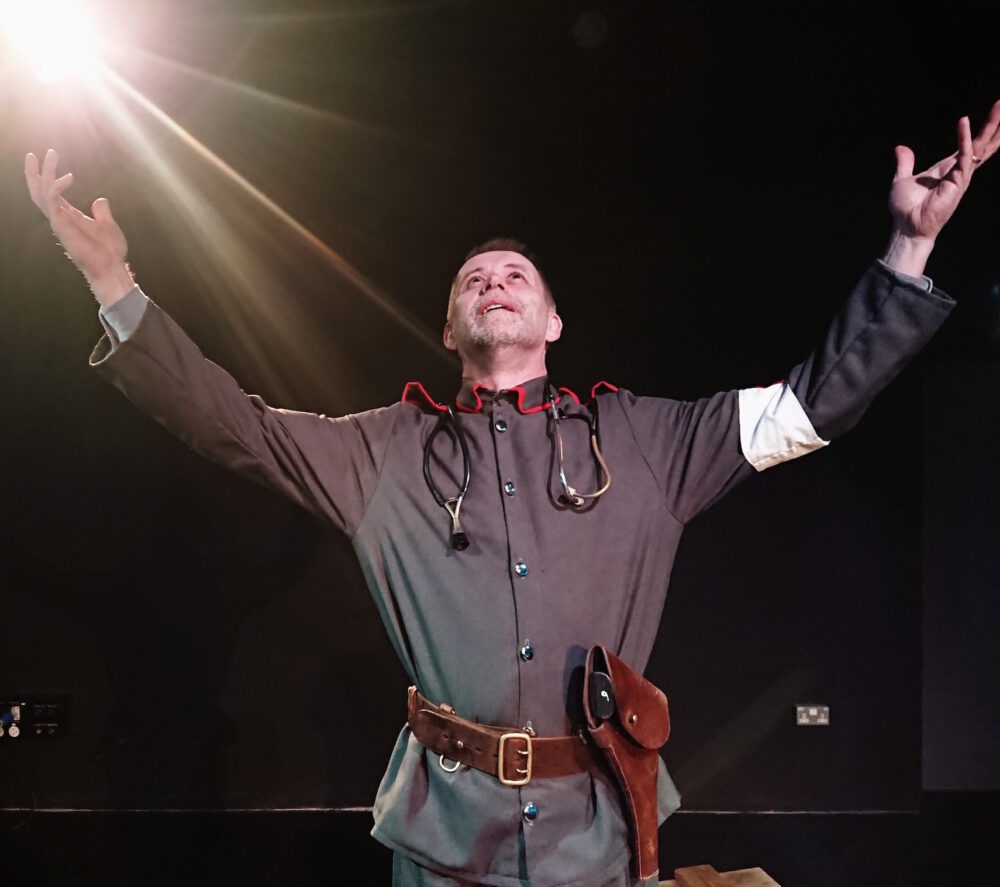 Voltimand and Cornelius are Joyfully Returned at the People’s Theatre Studio: The Doctor (Pete McAndrew)

Minor characters in Hamlet have a habit of wandering off into plays of their own – if two such occurrences can be called a habit.

Rosencrantz and Guildenstern, the hapless college ‘friends’ of the Prince of Denmark, were brought back to life in Tom Stoppard’s much lauded comedy of the 1960s, thereby gaining long belated stardom.

“Who?” I hear you cry. Well, that was my response.

The singular achievement of this pair of theatrical blips, as far as I can tell, is to pass almost unnoticed through what is arguably the most famous play ever written.

But here they are with a play of their own – and a prize-winning one at that.

The script by Paul Vates, Leeds-born actor and writer, was among nearly 100 submitted for the People’s Play competition and it won – hence this production with a cast of four under the direction of Chris Heckels.

In a nutshell (which will, frankly, suffice), V and C – listed along with R and G as courtiers in my text – are sent by Denmark’s usurping King Claudius on a mission to Norway.

Their job, their only job, is to persuade that country’s monarch to persuade his nephew, Fortinbras, who has a warlike tendency to view neighbours as potential conquests, to leave Denmark out of it.

They go, they report back. Job done. Young Fortinbras will smash up Poland instead.

Out of this slight material Paul Vates has spun a two-hour flight of fancy which sees V and C a little off course on their trip back to Elsinore, which is to say caught up in the First World War in France. 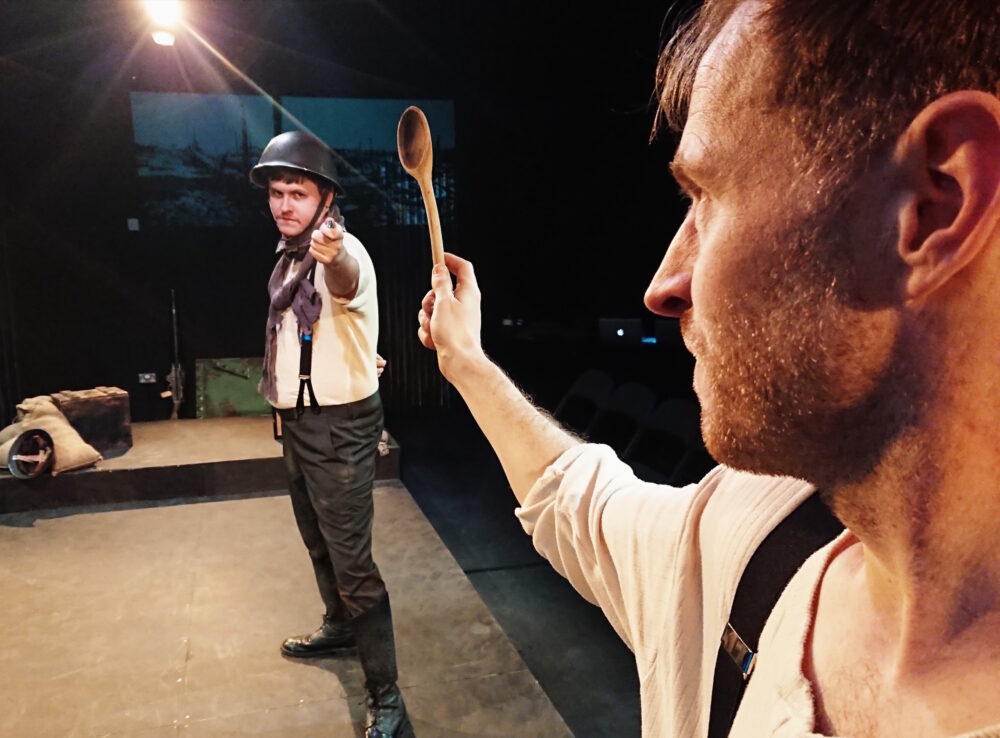 Blundering along in their wake, like a myopic squaddie in No Man’s Land, was this particular audience member.

I confess I have enjoyed quite a few nights in the theatre in a state of bafflement. Shakespeare was 99% bafflement until a young Ian McKellen as Sir Toby Belch tore the scales from my eyes.

With Beckett, of course, bafflement is the nature of the beast.

It is good to be reminded that you might not be as smart as you liked to think you were.

To those among you who spot the clues, get the allusions, join the dots and leave with a smile perhaps tending towards smugness: Congratulations!

The action unfolds on a runway stage (peering across it I scanned faces opposite for signs of matching puzzlement) with a few props and a projection at one end (a blasted landscape, a church window…). 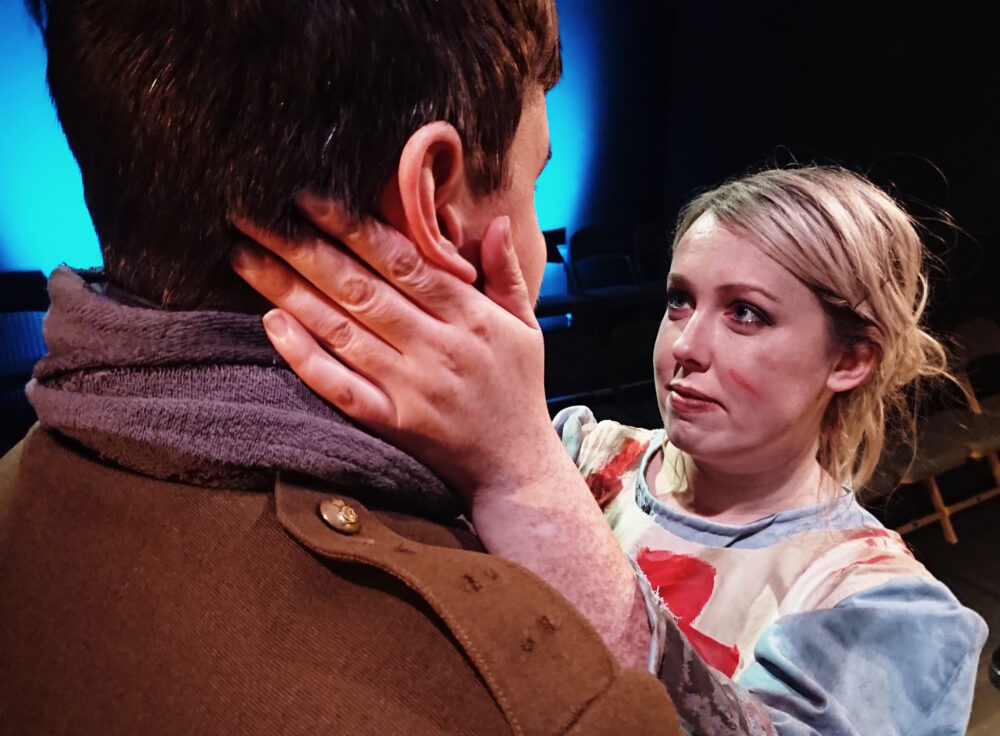 Here we meet V and C, scared, confused and in the heat of a battle they don’t understand. Many have died. One of them lies quite close by – but turns out not to be dead. And she’s a woman.

Absolutely full marks to the cast – Stephen Sharkey (V), Robbie Close (C), Laura Brown, as the Sleeper, and Pete McAndrew, whom we and our heroes meet as a doctor in the uniform of the Kaiser.

While not able to deliver clarity of meaning (to me, at least), they hurl themselves with energy, humour and conviction into this parade of puzzles.

The debt to Shakespeare is obvious but there is a significant nod to Stoppard in the snappy, anxious, joshing exchanges of our two heroes. Beckett, too. Who hasn’t been all at sea in Waiting for Godot?

Was it all, at the end, a play within a play? Shakespeare did enjoy those. Was the battlefield more real than the hospital? And what about the milk that might not be milk?

“If this is normality, we’re insane to believe in it,” says V at one point. Or is it C? Sounds like Catch-22. But that’s another story.

Voltemand and Cornelius are Joyfully Returned is at the People’s Theatre Studio until Saturday (May 11). Tickets: www.peoplestheatre.co.uk or tel. 0191 265 5020.

Back to articles
« Review: Kema Sikazwe shines bright at Live Theatre
Vic Reeves at the Biscuit Factory »
Share on
Share on