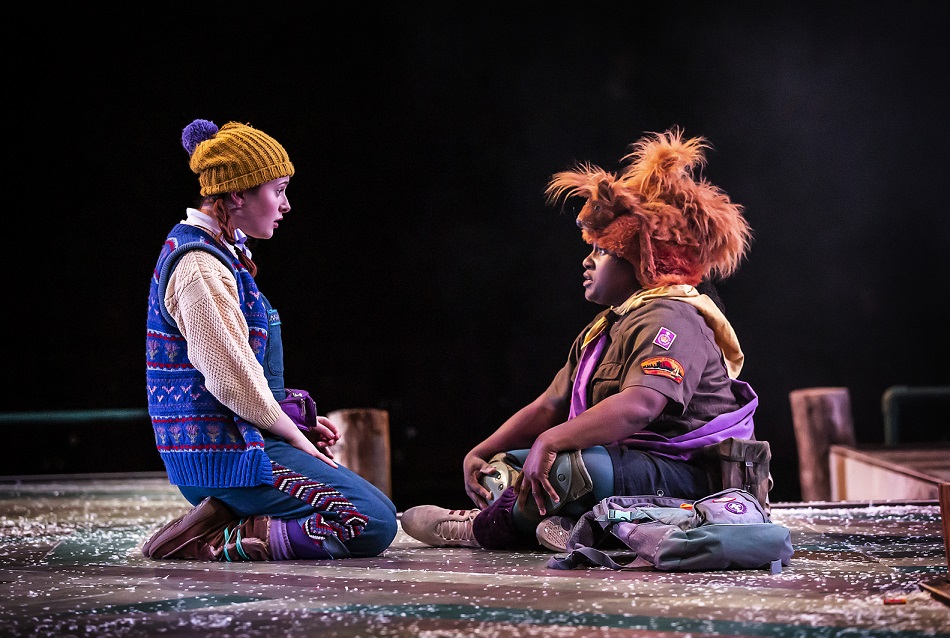 There is a flurry of things to enjoy about Northern Stage’s Christmas-dipped adaptation of The Snow Queen.

Not least a massive reindeer puppet, but more of that big fella later.

Hans Christian Andersen’s fairytale has been placed in the woolly mittens of writer Laura Lindow, director Mark Calvert and designer Rhys Jarman who have combined their considerable talents to adapt this well told story about the power of friendship and the importance of staying true to who you are.

Set in the frustrated and fearful town of Stifle, we find a community on the edge of the unknown. Nervously existing in a place where wishing and wanting are off limits and the petty rules of law are paramount, it’s fair to say that the notions of joy and hope are almost as unsayable as the word S N O W.

Somehow, our scooting schoolgirl hero Gerda (Lauren Waine) manages to stay optimistic though, buoyed by a burgeoning friendship with new boy Kai (Gregor Mackay) and the possibility of a trumpet solo. 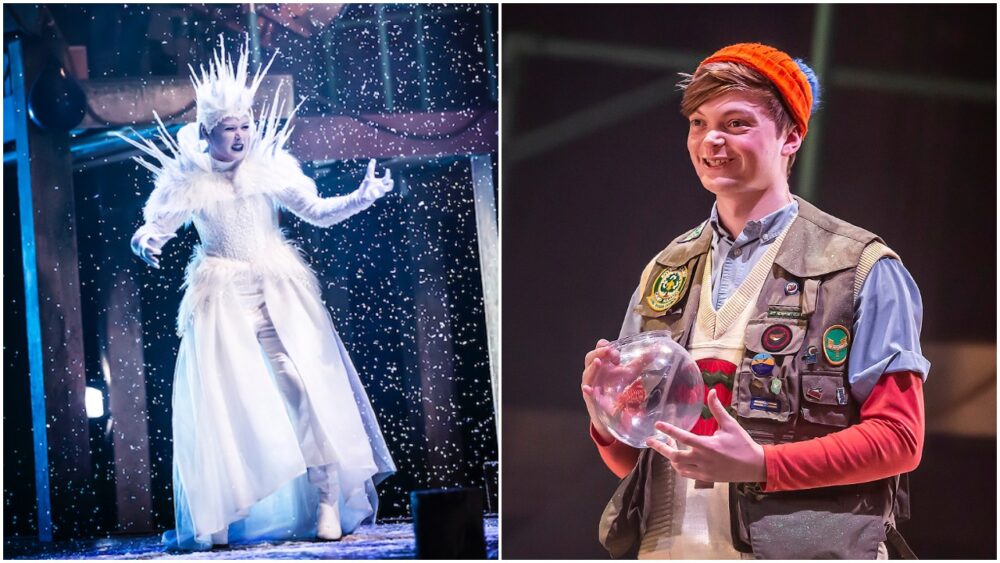 Not even the constant put downs from tyrannical warden teacher Elsie Orr (delivered in best baddie fashion by Paula Penman) are enough to grind her down.

But when Kai is tempted away by the chilly allure of the increasingly sparkly Snow Queen (Elizabeth Carter) – who has a full and frosty back catalogue of frozen-hearted children under her icicle belt, by the way – Gerda has to draw on every bit of hopefulness she has to find her friend and bring him home.

The creative team have thrown a lot of bells, whistles, trombones, scooters, neon dogs, magical bees, illuminated umbrellas and more (may I remind you of that giant reindeer) at the ambitious production, which is performed traverse style on an extravagant multi-level set. 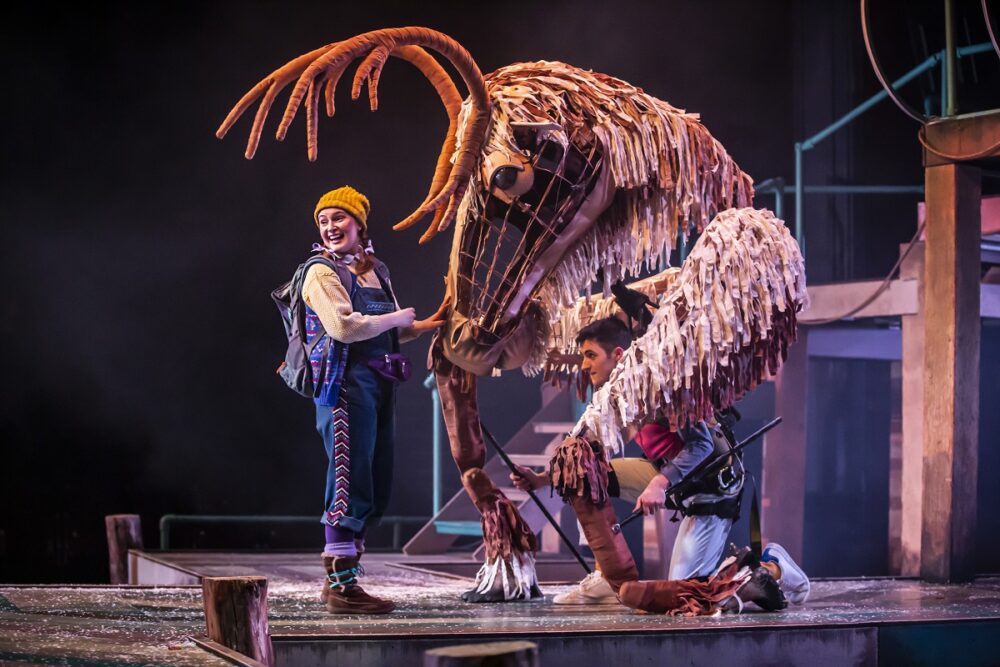 The cast are across-the-board smashing, meanwhile a parade of costumes, puppets and song and dance numbers ensure there’s always something to please the eye and any toes which fancy having a tap.

But as much as The Snow Queen is certainly a feast for the senses, truth be told, my senses felt a little over-served at times. It’s never a pleasure to have to strain to hear what’s being said, and I found myself angling my left lug to the stage with a squint on more than one occasion. 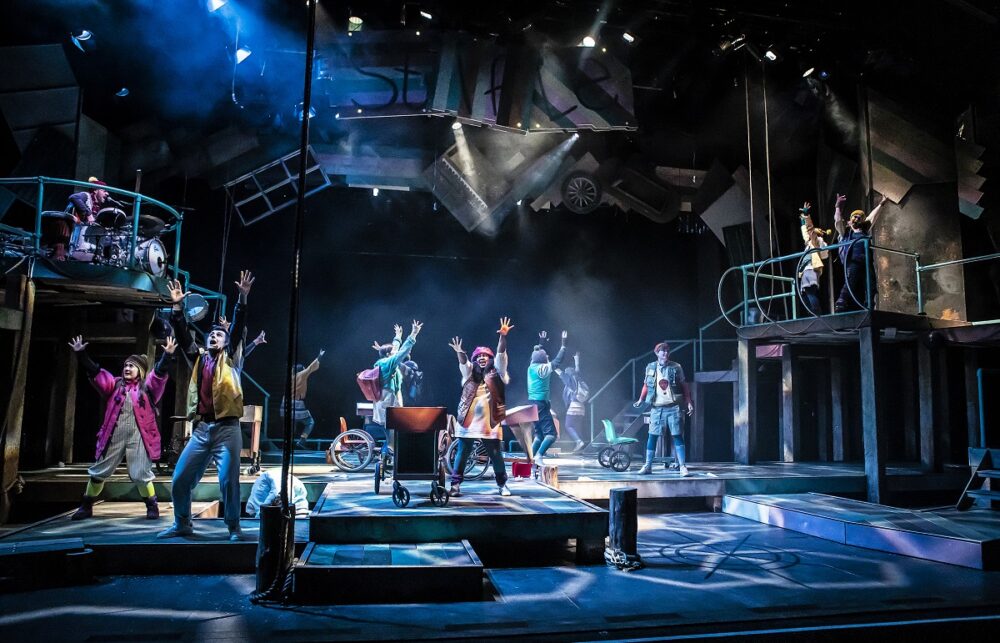 That said, my eight-year-old companion didn’t seem to have that problem. She was up and dancing for the finale and when the lights came up, was displaying a massive smile and an even bigger double thumbs up. With bells and whistles on.

Cast and creative team announced for The Snow Queen
30 November – 4 January
Press performance: Thursday 5 December, 6pm
From the team that created A Christmas Carol, The Wonderful Wizard of Oz, James and the Giant Peach and
Alice in Wonderland comes a brand new production of Hans Christian Andersen’s classic fable, The Snow
Queen (30 November – 4 January).
Adapted for the stage by Laura Lindow and directed by Mark Calvert, The Snow Queen will be designed by
Rhys Jarman, with choreography by Martin Hylton, lighting by Sam Vivash, music by Jeremy Bradfield and
Hannabiell Sanders, and sound design by Nick John Williams.
Lauren Waine will play Gerda. Last seen at Northern Stage in sellout production The War of the Worlds – part
of Northern Stage’s NORTH programme for emerging talent in the North East, Lauren’s theatre credits
include The Importance of Being Earnest (The Gala Theatre), Wormtown (The Customs House and Alphabetti),
Dr Faustus (The Sam Wanamaker Festival, The Globe), Pericles (Brighton Open Air Theatre), RENT! (Paul
McCartney Auditorium) and Three Jumpers (Edinburgh Fringe). TV roles include Molly on ITV’s Vera and Fee
on CBBC’s The Dumping Ground.
Lauren said, “To be playing the role of Gerda is a dream come true. As a little girl, I came to see the Christmas
shows at Northern Stage every single year and to now be getting to relive that tradition in the most magical
way is very exciting. I fell in love with Northern Stage when I came here after drama school to work on The War
of The Worlds and I am so excited to be back. Thank you to all at Northern Stage for giving me the opportunity
to come back and play in the snow this Christmas.”
Elizabeth Carter will play the Snow Queen. Currently appearing at Live Theatre in Clear White Light, she said,
“Growing up in the North East, I would regularly watch and be inspired by the incredible ensemble at Newcastle
Playhouse [now Northern Stage]. It’s always been a dream of mine to perform in a show created here at
Northern Stage. I’m very excited to work with such a brilliant team and celebrate the Christmas season being
part of what I’m sure will be a fantastic show!”
They are joined by a cast of actor-musicians including Jeremy Bradfield (The Wizard of Oz, Northern Stage);
Craig Fairbairn (A Christmas Carol, Northern Stage); Gregor Mackay (Nae Bother! Oran Mor/Ed Fringe); Paula
Penman (Woven Bones, Cap-a-Pie) and Hannabiell Sanders (A Christmas Carol, Northern Stage); plus a chorus
of six performance students from Newcastle College as part of a continued partnership to give actors in training professional opportunities.
Tickets are now on sale from £10 at www.northernstage.co.uk or call the box office on 0191 230 5151

Back to articles
« The old friend, the Phoenix and the Panto. A week at the People’s Theatre
Matt Goss swings onto Tyneside with Vegas show »
Share on
Share on