Review: The River at the People’s Theatre

The new Studio Theatre at the People’s is open and in full flow this week with a production of Jez Butterworth’s The River. David Whetstone was more than happy to dive in. 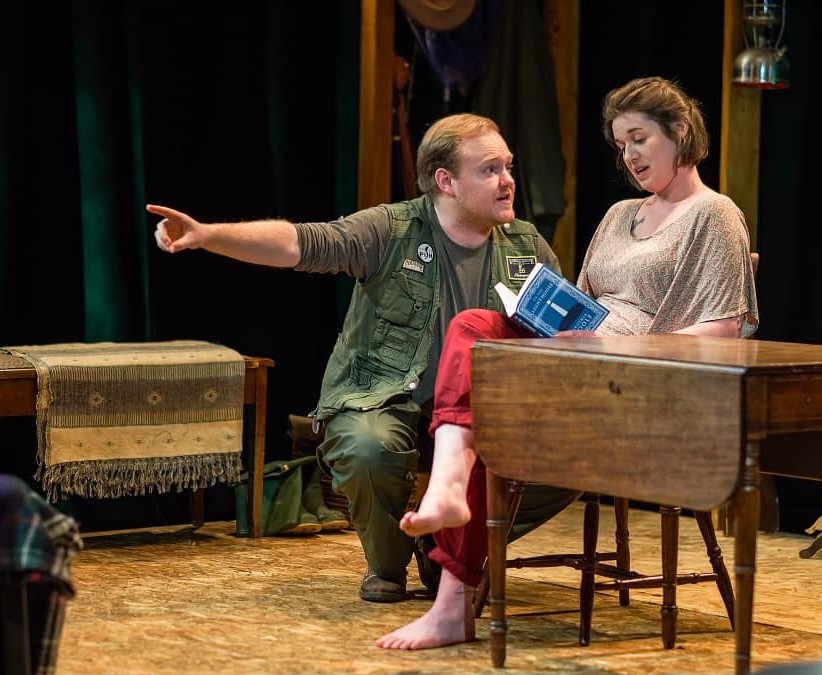 The expensive upgrade of the People’s Theatre – next door to the Corner House pub at the Heaton end of the Coast Road – has been a work-in-progress for quite a while.

Completed in phases, the benefits of the new entrance and extensive new foyer are already being felt.

Now the new Studio Theatre is finally open for business.

Reaching your seat in the old Studio, a little akin to an attic, meant a steep ascent and some dexterity. You could say it was an adventure.

To which the less than agile might retort that adventures in a theatre are best kept on the stage. To wheelchair users, the little auditorium was simply out of bounds and that wouldn’t do.

It was exciting on Tuesday – at last – to step into the new space, reached via a corridor running off the ground floor foyer. No accessibility problems here. No flexibility problems either. The seats – easy enough on the bum for a 75-minute play with no interval – can be arranged according to a production’s needs.

For this opening show 70 of them were configured in an L shape. ‘In the round’ would be easy and I was told capacity could be increased if necessary. There are finishing touches to be applied but this is progress of the most heartening kind. 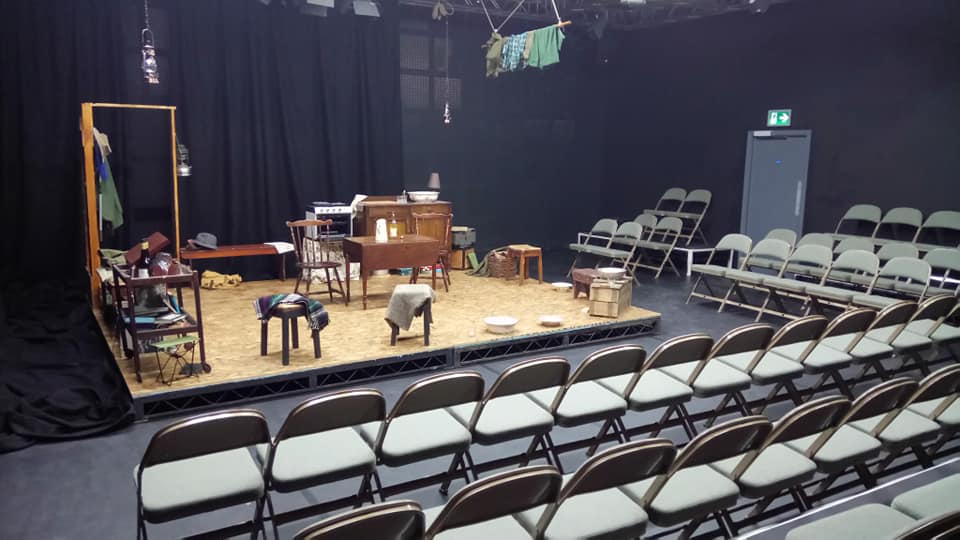 The Studio Theatre, whose name may change if a sponsor is found, won’t wow anyone with its architectural flourishes but that wasn’t the point. What we have is a sensible, adaptable, comfortable space reachable without physical effort – and even in a wheelchair.

Good, good, good. Even George Bernard Shaw, famous supporter of the People’s, would surely have twirled his whiskers in approval.

For the inaugural production the People’s chose The River by Jez Butterworth who finds magic in the English countryside with its beauty, its folk traditions and its occasionally dark and disconcerting weirdness. 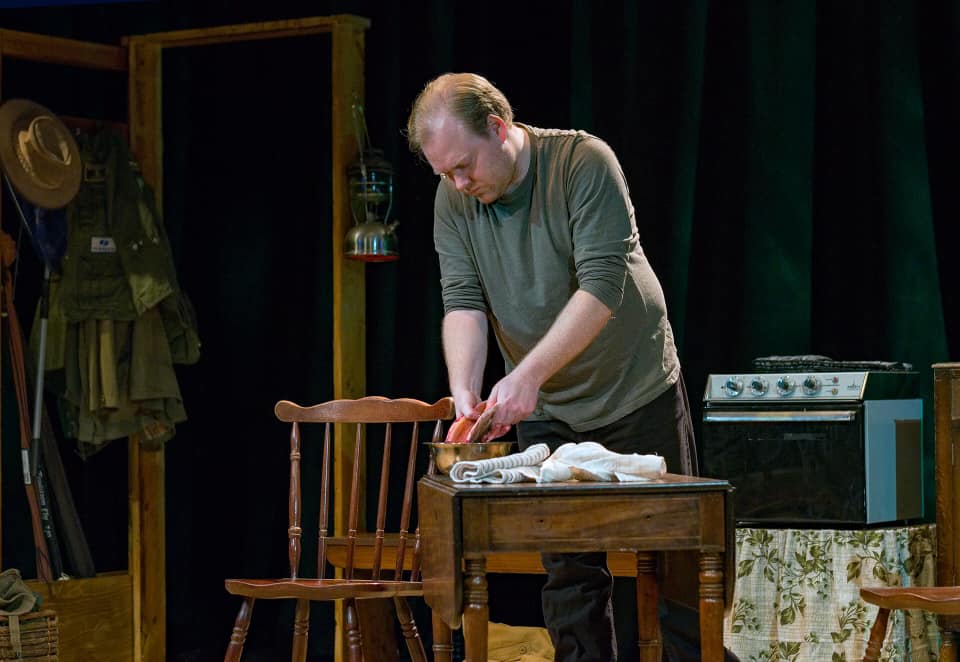 Director Sarah McLane serves up a beguiling theatrical puzzler boasting performances which belie the description ‘amateur’ and a set perfectly describing the scruffy/comfy riverside cabin where the play is set.

It is here that we meet The Man (played by Ian Willis) and his girlfriend, The Woman (Rhiannon Wilson). The Man is a fisherman in thrall to the wonders of the sea trout which he can describe in poetic terms.

The Woman, though, doesn’t seem bowled over at the prospect of landing her first fish. She prefers the stunning sunset for which he can’t share her spontaneous glee. He’s seen it before. (Or is it that he has heard such enthusiasm expressed before?)

This is a couple still working each other out. The expressions of devotion are tempered. It could go either way, you feel. 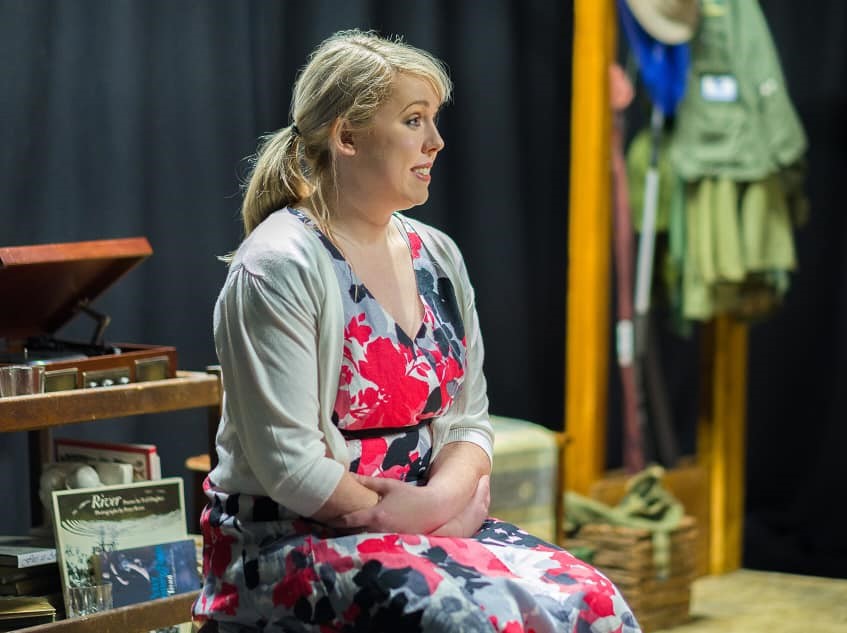 And then The Woman is suddenly replaced by The Other Woman (Evelyn Ryan) whose slightly altered narrative slots into the void. Woman, The Other Woman and then – spoiler alert – comes Another Woman (Laura Brown) whose voice we have heard singing off stage.

Is The Man just a chancer, using his cabin as a weapon of seduction? Or are there deeper forces at work, like those in the dark of the river where the silver fish play?

Questions, questions and precious few answers. Not like Agatha Christie. But don’t let that deter you.

This Studio Theatre opener is faithful to the strangeness of the play and if you are not squeamish about watching a fish gutted on stage – full marks, Ian Willis, surely a fishmonger by trade – then get a ticket if you can.

Back to articles
« Review: Approaching Empty at Live Theatre
Review: Jack Lear at Northern Stage »
Share on
Share on