Review: Iris at The People’s Theatre

The People’s Theatre is opening a new season with a play by one of its own. Sam Wonfor went to see Iris. 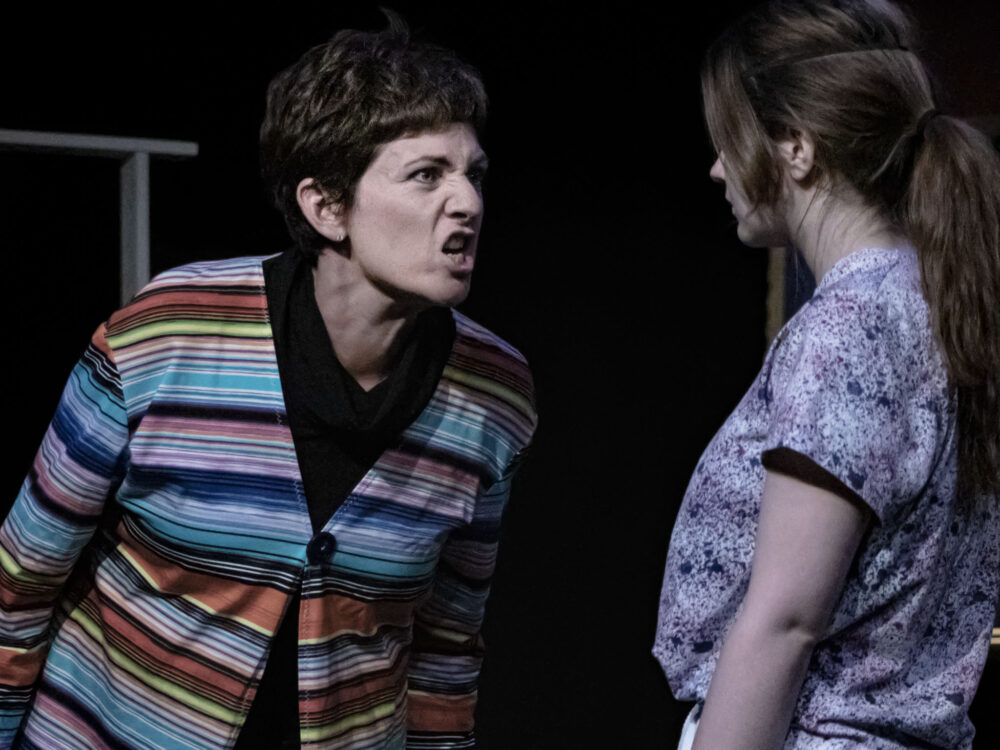 It was a few years back when I first spoke to Alison Carr about Iris.

A family drama dipped in a dark comedy marinade, the play was her first full-length commission for Live Theatre and it’s fair to say she was beyond chuffed about bringing a story she’d been looking to tell for a long time to one of her favourite stages.

That was back in 2016 – and a badly timed holiday on my part meant I didn’t get to see it.

This week, a new production of Iris is making its debut on another stage Alison holds very dear – the Studio at The People’s Theatre in Newcastle where she enjoys her day job in the box office and where she has also flexed her performing muscles many times over the years. 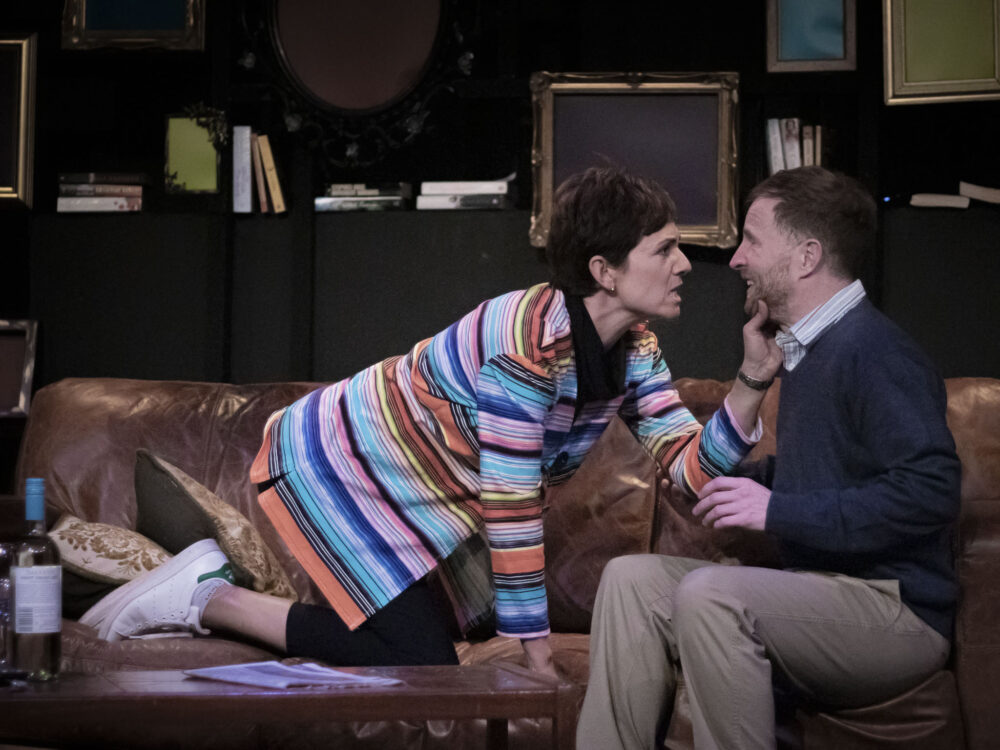 It’s opening The People’s new season – offering me the chance to finally see the whites of Iris’ eyes.

A living room reflected by a wall of mirrors and assaulted by the aftermath of a domineering mother’s funeral is where we are invited into this family’s story. Half eaten sausage rolls and empty beer cans decorate the surfaces in depressing fashion while an unidentified stench is getting stronger.

Julie – the elder of two sisters born a generation apart – drunkenly returns to the post-wake scene she left a few hours before.

She’s joined by Gerry, a canny divorcee crime scene cleaner who she’s hoping will wash away her sadness – or at least help her forget it for the night. A master of the inane anecdote and a man whose beige trousers were presumably selected by his personality, Gerry has no idea what he’s getting himself into.

The next morning he’s introduced to younger sister Ruby who didn’t make the funeral because she can’t bear to make it anywhere.

Clearly struggling with not having her mum – Iris – around, Ruby channels her grief into a series of scathing sisterly observations designed to make Gerry very uncomfortable and Julie feel like shit. 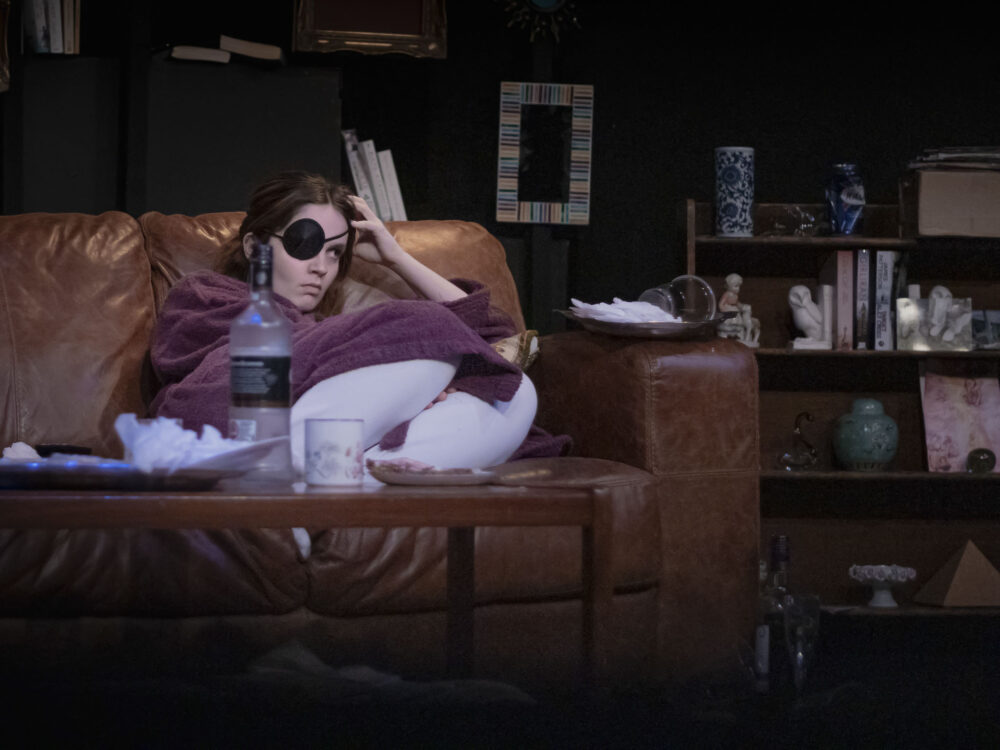 Demonstrating a knack for a graphic turn of phrase to have you giggling through your fingers, Sarah Mulgrew plays Ruby’s immaturity and well-trodden trauma with confidence and poise.

And then there’s Gerry – poor stuck-in-the middle Gerry. Played quietly, tenderly and for sympathetic laughs by Stephen Sharkey, Gerry is described perfectly in Alison’s programme notes (to be fair, if anyone should describe him perfectly, it’s the writer… but credit where it’s due) as ‘a man who is more than he seems and perhaps less than he hopes’.

Still, he’s a whizz with a can of Febreze and a jay cloth… and he’s not too shabby when it comes to a bit of familial counselling, as it turns out.

As the days following Iris’ funeral play out, layers of Julie and Ruby’s history are peeled back and peppered with little details of their childhoods and the big events which changed them forever. Weetch deserves an extra mention for her Act Two opening monologue, which lays a trail of breadcrumbs – or dog turds as it turns out – for us to follow.

And despite the outright absurdity of some of the above – it’s testament to Carr’s writing that you not only believe it all… but you care about it all too. See it if you can.

Iris is in The Studio at The People’s Theatre until September 14. Visit the website for more information and bookings or call the box office on 0191 265 5020

Back to articles
« Mining Institute closes for multi-million-pound transformation
Interview: Kathryn Williams introduces her Anthology »
Share on
Share on