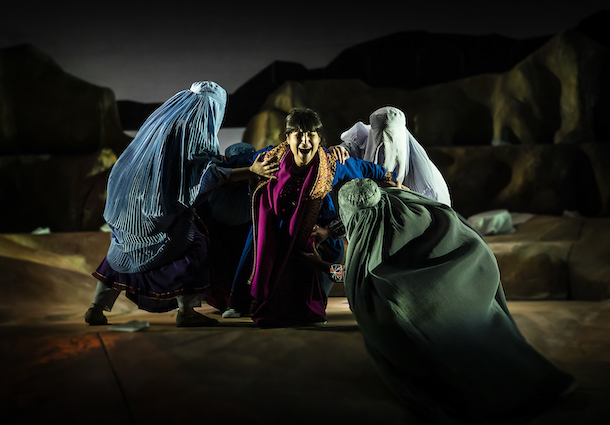 The title was taken from a poem but there’s little that is splendid about the lives of the women in Khaled Hosseini’s grim but compelling tale.

“How beautiful is Kabul beneath the barren mountains,” trills Ursula Rani Sarma’s stage adaptation of the author’s bestselling follow-up to The Kite Runner.

But Laila and her parents are preparing to leave Afghanistan’s war-torn capital when an incoming missile gets them.

The orphaned teenager is pulled from the rubble by neighbour Rashid who takes her in, later convincing her that her best friend Tariq, who might have offered sanctuary, has also been killed.

Taking my seat amid the multitude – Hosseini’s name has pulling power, thanks to his novels and, no doubt, the popular stage version of The Kite Runner which came to the Theatre Royal – I was at first struck by the Lego-like appearance of the set. 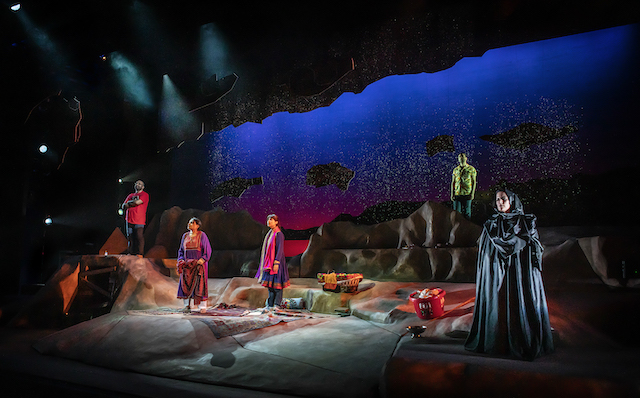 Elaborate, yes, but sand – or dust – surely isn’t that shiny? It’s a quibble that should barely register as such. The story’s the thing here and it’s so powerful.

Through Laila, played by the excellent and expressive Sujaya Dasgupta, we see that a young woman alone is vulnerable not only because of bullets and bombs but because this is a society where men hold sway – which is a nice way of saying misogyny is deeply ingrained.

There are good men in the play. Tariq (Waleed Akhtar) and Laila’s father seem gentle souls but it’s hard to see that the rise of the terrifying Taliban would have been so easy in a more equal society.

Cowardly and bullying Rashid (Pal Aron) has already made young Laila his second wife, to the chagrin of the older Mariam (Amina Zia) whose tragic story forms an important narrative thread.

“If she were a car she’d be a Skoda,” explains Rashid, installing his new ‘Benz’. But the new model pales in his eyes when she presents him with a baby girl instead of a boy. 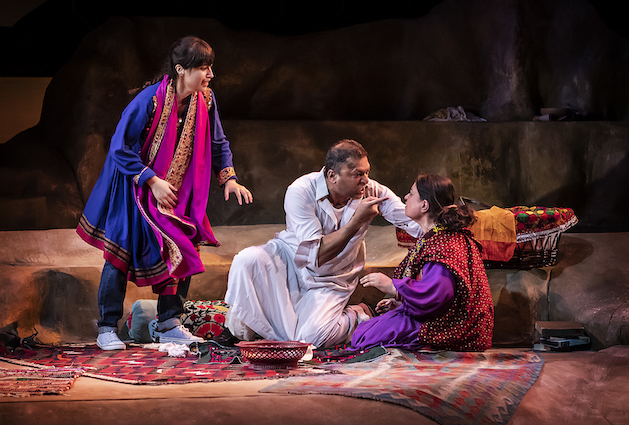 The timescale of the play zips back and forth. We see how Mariam was abused and betrayed as a girl and then how Laila’s vivacious daughter, Aziza (Shala Nyx), is stifled by the Taliban.

Burqas must be worn, girls must not go to school, music, dancing and other simple pleasures are forbidden on pain of a thrashing or worse.

For Laila and Mariam, united by circumstance, danger now lurks at home and outside. There is no authority to which they can appeal because men are in charge and a man’s word trumps a woman’s.

Ultimately, with horrible irony, they will be betrayed by the male character whom Laila loves the most.

You will share the women’s fear and sorrow and you will seethe on their behalf.

None of this should happen anywhere in the world and yet, of course, it does. After the performance there’s a bucket collection in aid of a charity which helps victims of abuse. 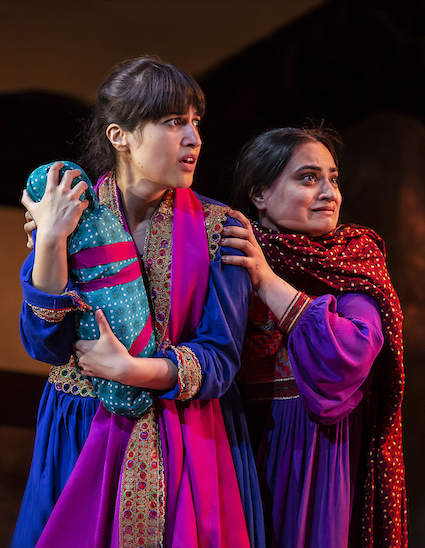 A Thousand Splendid Suns is at Northern Stage until June 15. Credit: Pamela Raith

A Thousand Splendid Suns is directed by Roxana Silbert. It’s nice to see her back. She spent part of her childhood in Newcastle after her family came to Britain from Argentina and she once ran the RSC season in Newcastle.

She has done a good job with this co-production by Northern Stage and counterparts in Birmingham and Southampton, eliciting powerful performances from her largely multi-tasking cast and leavening a tough tale with music and dancing.

If you don’t leave with a sense of burning injustice on behalf of women whose lot seems so hopeless and unfair, then you’re a tougher nut than me.

Meriting its extended run, A Thousand Splendid Suns runs at Northern Stage until June 15. Tickets from the website.