David Whetstone reports back from a mesmerising night at the Northern Stage following a retelling of Dickens’ seasonal classic. 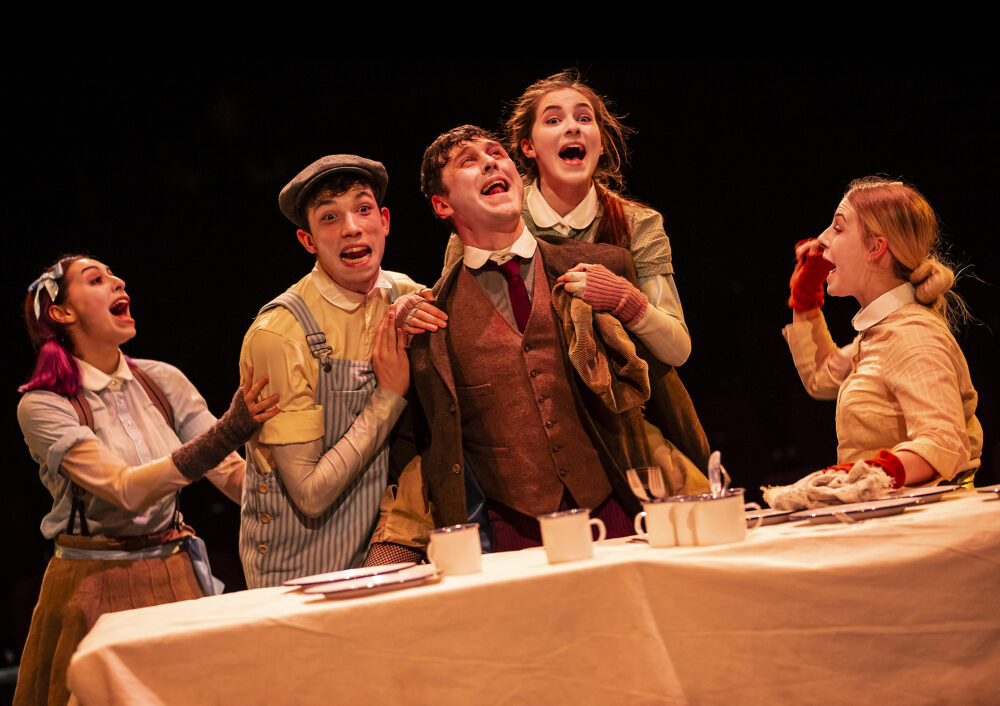 The sweeping main stage at this Newcastle theatre, where Sting played in the house band before his Police days, has never been wholly conducive to intimate performances.
But that’s not an issue here. Once again the Stage 1 and Stage 2 auditoriums have been combined to create a mini arena with multiple entrance points and the audience on four sides.
What unfolds is an exciting telling of Dickens’s famous seasonal morality tale updated to the interwar period – braces and flat caps much in evidence – and infused with compelling rhythms.
It could hardly contrast more vividly with the theatre’s enjoyable but conventional 2007 production of A Christmas Carol, directed by Erica Whyman in her days running Northern Stage before going to the Royal Shakespeare Company. 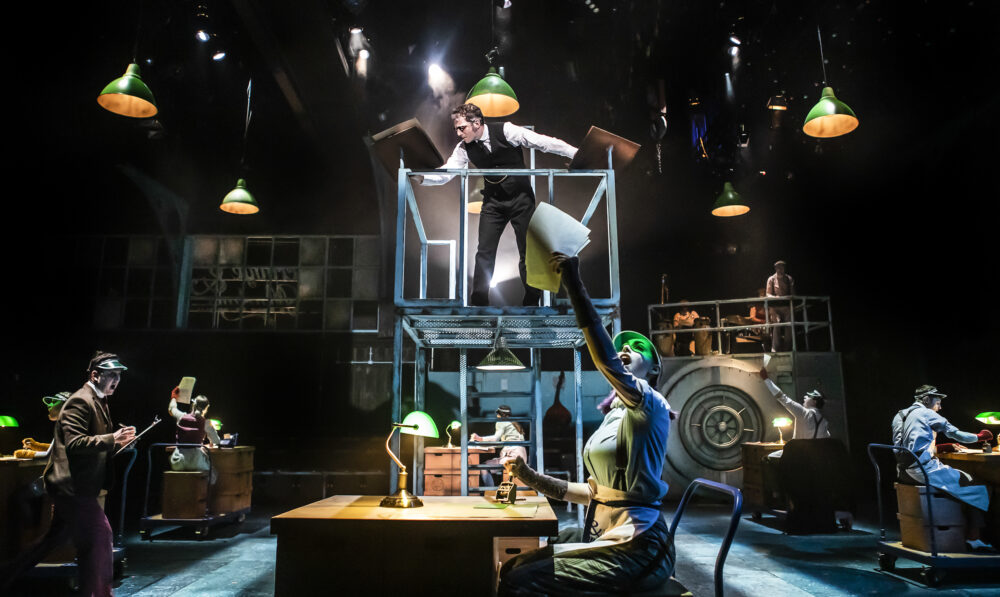 This time company associate director Mark Calvert, who played Bob Cratchit in the Wyman production, takes the reins and proves again that a big space holds no fears for him. On the contrary.
The tried-and-tested script is by Neil Bartlett but it’s the music and spectacle that define this mesmeric production with wheeled props gliding beneath a giant clockface ticking out time. 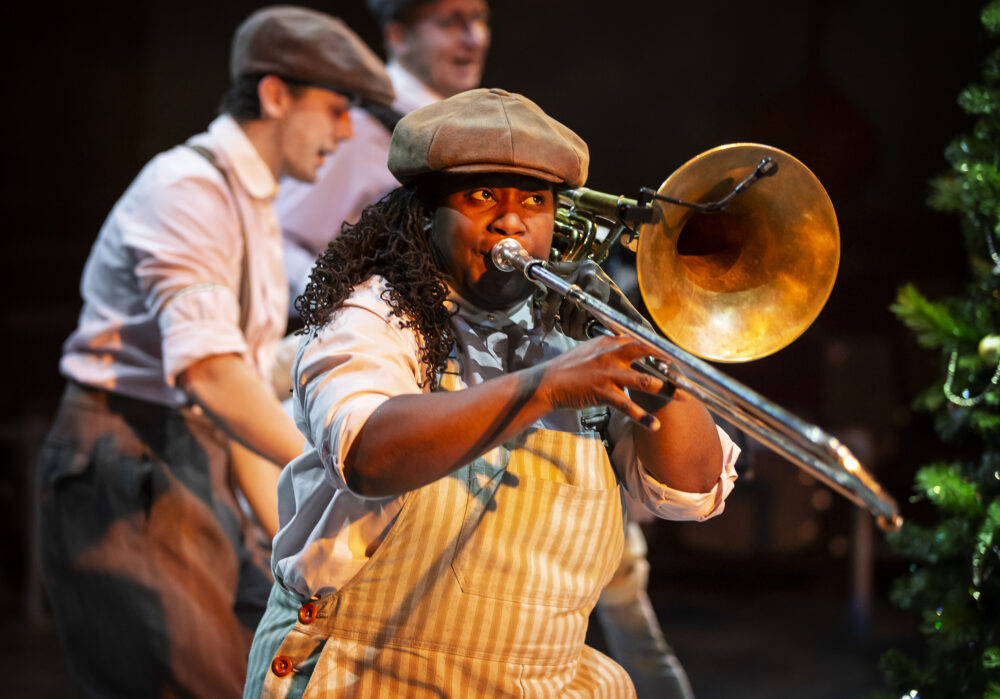 Hannabiell Sanders, the Newcastle-based American trombone player and bundle of infectious energy, is credited as composer and musical director and her influence is clear to see and hear – along with that of quirky accordion maestro Tim Dalling, late of the Old Rope String Band.
The lean and miserly Scrooge is well played by Nick Figgis. The opening scene, as he surveys the wage slaves in his counting house, recalls that sequence in Mel Brooks’ film The Producers with all the robotic clerks at their desks.
Soon Scrooge is spooked by former partner Jacob Marley, dropping from a rope in the ominous and scarily bewigged form of Rachel Dawson (prompting an awe-struck little lad from Byker to confide later: “I saw a zombie”). 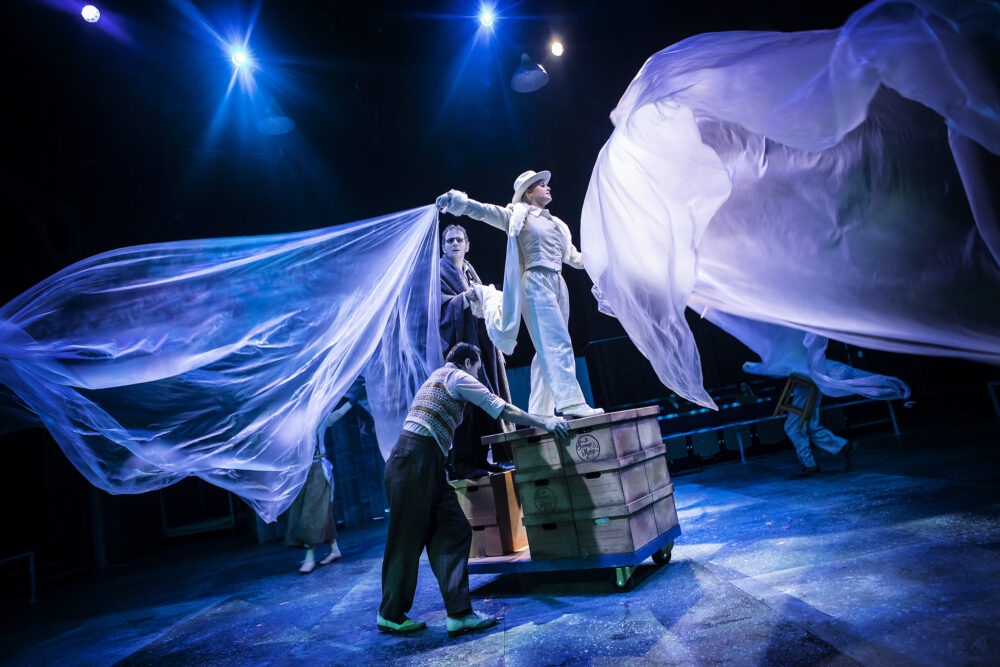 Having bah-humbugged nephew Fred’s dinner invitation, Scrooge is soon whisked away by the ghosts of Christmases past, present and yet-to-come – the latter a towering spectral puppet.
In time-honoured fashion he duly mends his ways with a giant turkey delivered to the hard-up Cratchits and Tiny Tim spared from an early grave.
It’s very much an ensemble piece with the actor-musicians, including drama students from Newcastle College, rising to the challenge of Martin Hylton’s choreography and Hannabiell’s beautiful versions of Christmas carols infused with jazz, gospel, blues and soul.
A haunting rendition of In the Bleak Midwinter, tweaked to make it even more mournful, is still in my head now.