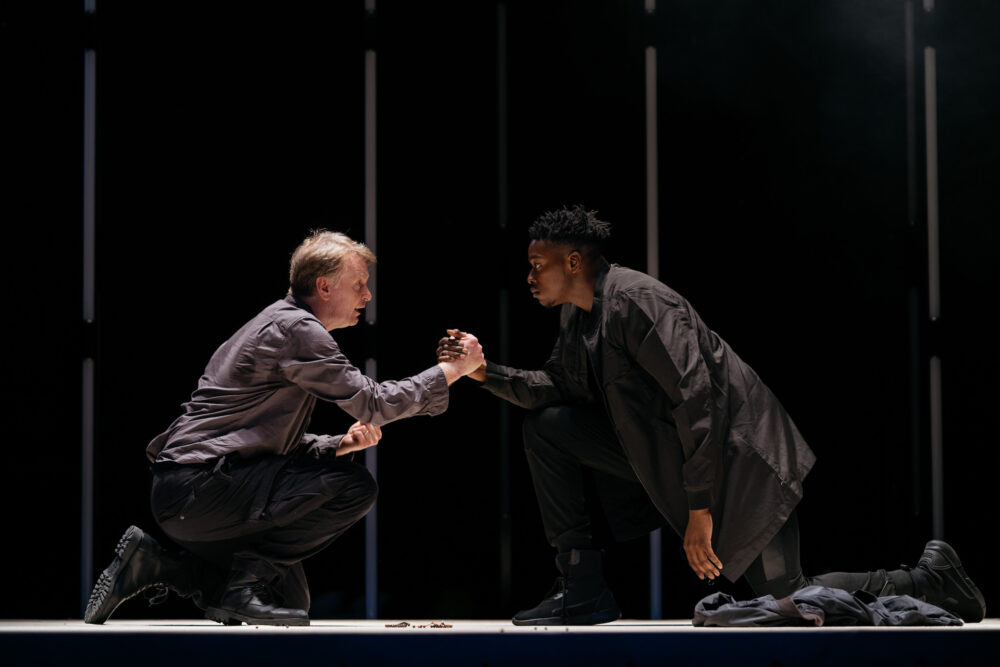 The more senior of us will feel we’ve been starved of the Bard on the Newcastle stage since the Royal Shakespeare Company abandoned its annual season at its ‘home in the North’. It’s more likely we were over-indulged.
Doubtless knowing little of that, a young audience is flocking to this co-production by English Touring Theatre (celebrating 25 years – congratulations!), Bristol-based Shakespeare at the Tobacco Factory and Oxford Playhouse.
Othello doesn’t get done that often. The actions and the fate of its title character, the Moor who was a slave but has earned the right to become a general in the Venetian army, seem uncomfortably racist.
But Richard Twyman’s production is presented as a tale for our particularly fractious times. Modern dress plants it firmly in the here and now and while Othello is in a minority because he’s black, it’s more significant that he’s a Muslim. 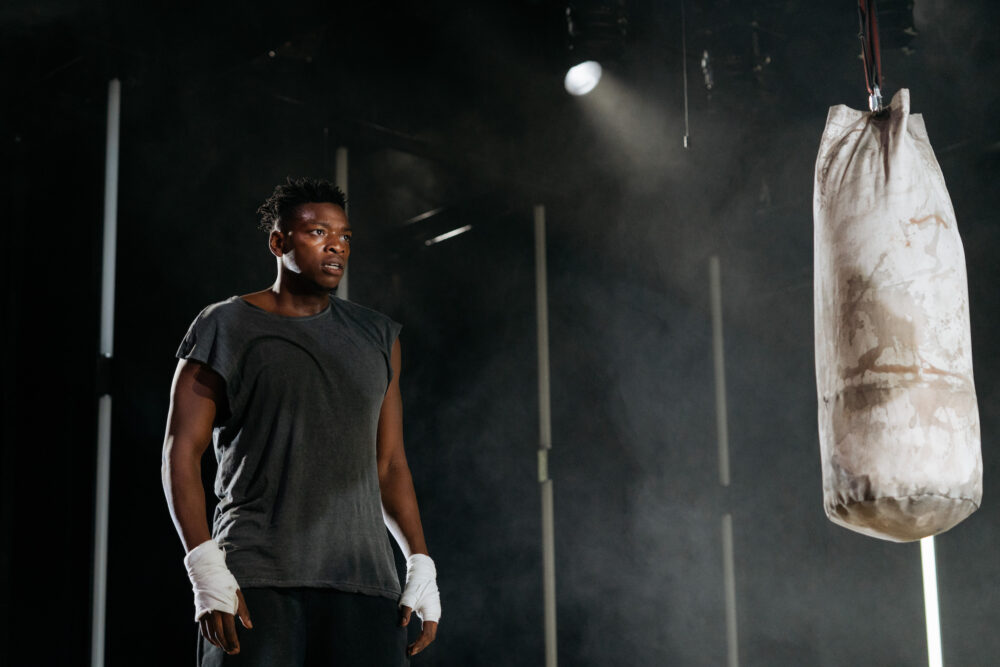 The action begins with Othello and a hijab-wearing Desdemona – daughter of the senator, Brabantio – exchanging vows in Arabic. But this being a predominantly Christian society, Othello thereafter sports an ostentatious crucifix.
This muscular Othello, played by Victor Oshin, rising to the challenge of his first professional role, towers above Kitty Archer’s Desdemona but their devotion seems genuine. She, bouncy and intelligent, confidently brushes off her father’s disapproval to stand by her man.
An impending Turkish invasion of Cyprus is part of the story so there’s a lot of hearty, soldierly action, even a boxing match, on Georgia Lowe’s set which comprises a box defined by hanging neon strip lights. 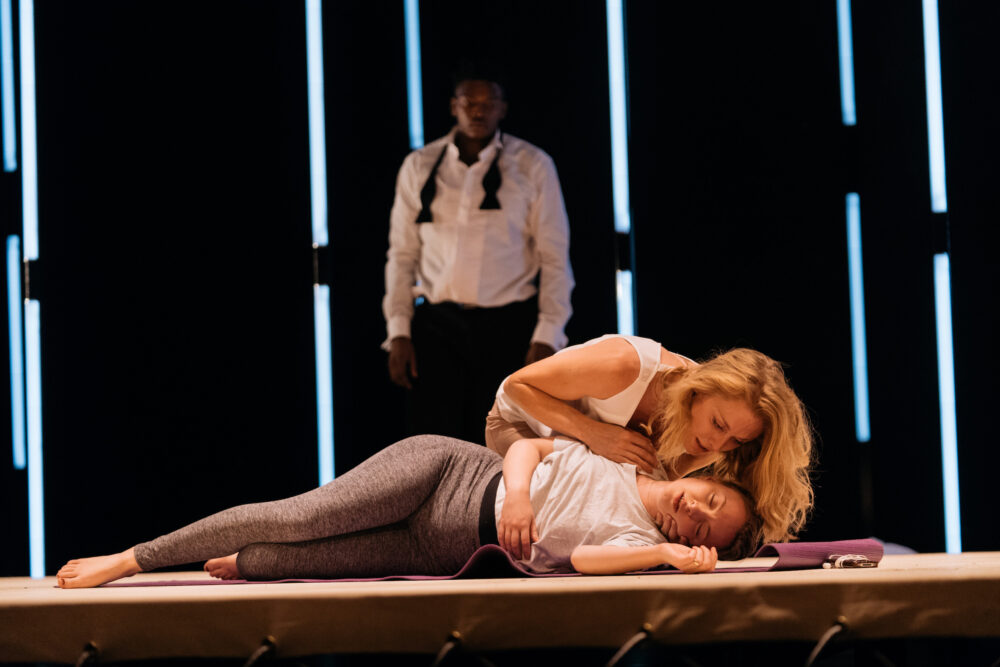 But the military stuff is largely contextual. Close attention in Othello is on those natural human emotions like jealousy and suspicion and how easily they can be stoked up and manipulated by rascals bent on havoc.
Pulling the strings is the conniving Iago, Othello’s ensign, burning inside because the younger Cassio has been promoted over his head.
Philip Correia’s Cassio is a fine, upstanding chap, rather RSC-posh. He doesn’t even drink until he’s driven to it. Paul McEwan’s Iago, on the other hand, has a shifty look and mutters under his breath – prompting me to glance occasionally at the screened text scrolling at either side of the stage (an interesting innovation which I wouldn’t condemn).
When Roderigo, a Geordie nobleman who fancies Desdemona, whines to Iago about her marriage, Iago starts setting everyone against each other, even involving his unwitting wife Emilia (Kelly Price) in his dastardly plot. 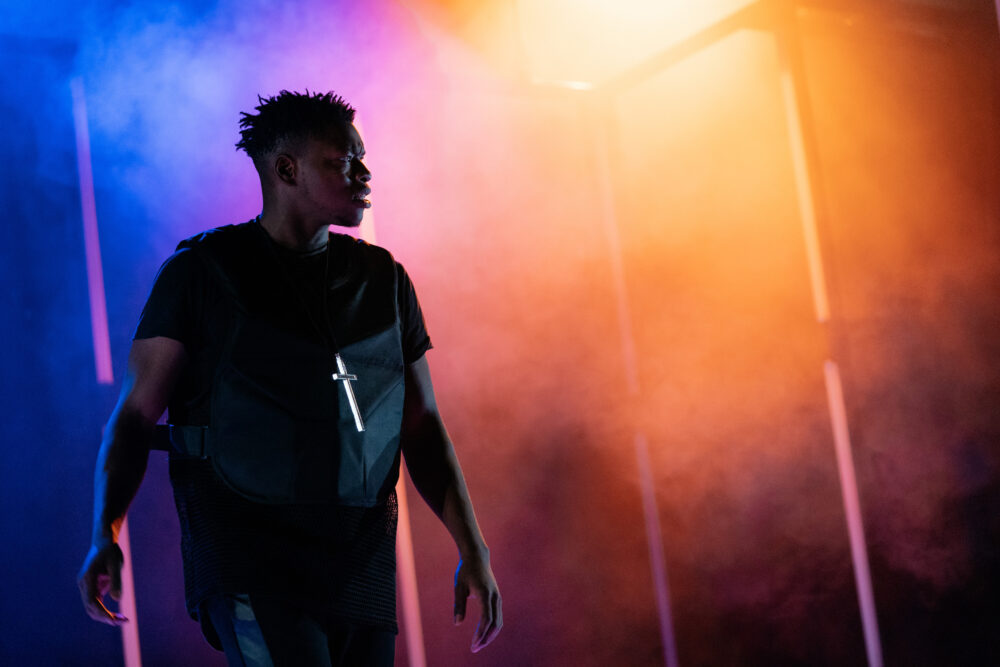 You might have stopped short just there. Geordie nobleman?
Oh yes indeed. It’s not demanded by Shakespeare but this Roderigo is the excellent Brian Lonsdale, late of The Pitmen Painters and North East through-and-through, who gets a chortle with his delivery of a single word, “man”.
The climax of the play is not funny at all, of course. Jealous because he has been persuaded by Iago of her infidelity, Othello – in a genuinely gut-wrenching scene – strangles the blameless Desdemona and the stage ends up littered with bodies.
The bright lights go off, the bloodied corpses rise and the applause is warm. 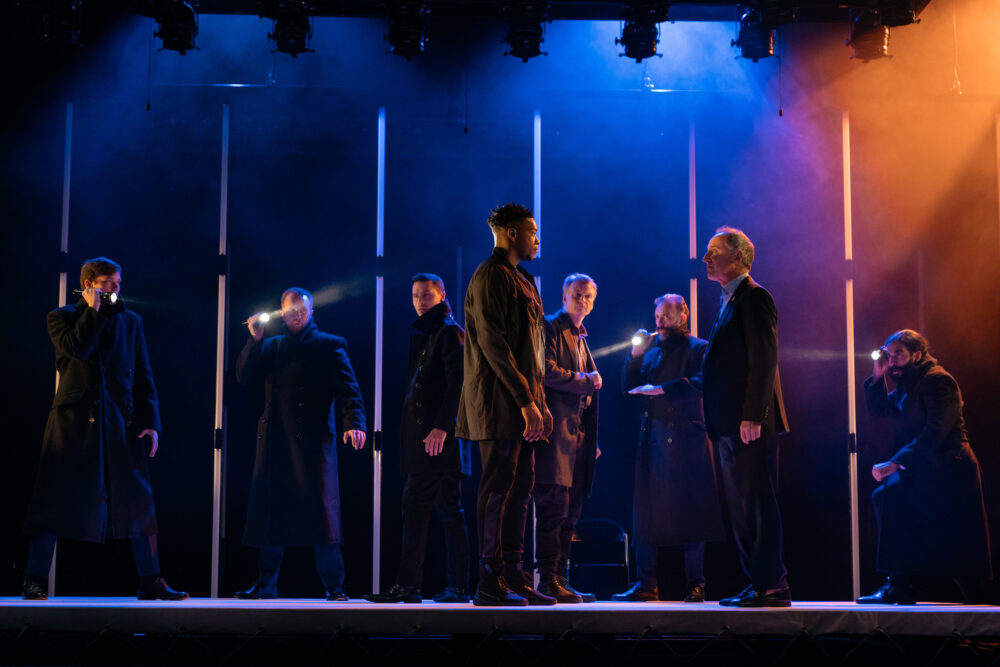 After a couple of recent 90-minuters at Northern Stage (straight through, no break) it was good to exercise the muscles in a play of Shakespearean length (2 hours, 45 mins plus interval).
The young folk around me had come prepared with beers and coffees – and was that a pizza box I saw proceeding along the front row? The theatrical fare before them – despite some lapses in diction which made those screens handy – turned out to be a thought-provoking and entertaining treatment of a Shakespeare tragedy.
Hopefully they’ll be demanding more.