Opera North are laying a hatstand-worth of hats at Theatre Royal Newcastle this week. Gail-Nina Anderson and David Whetstone report back. 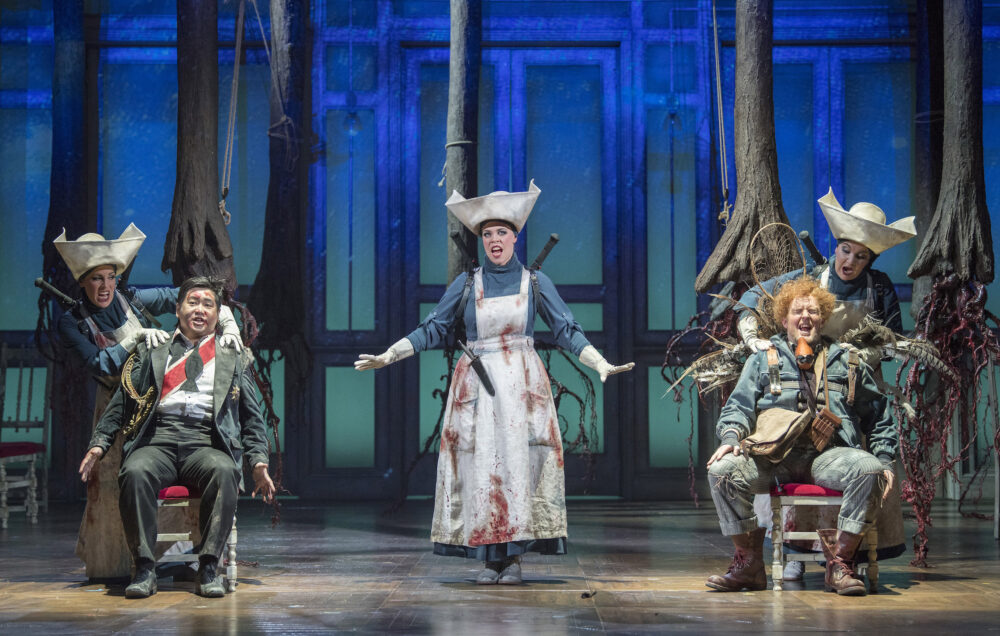 The Magic Flute from Opera North at Theatre Royal Newcastle

It’s a relief to find Opera North director James Brining describing Mozart’s The Magic Flute as a bit of a jumble sale, stylistically.

The mad plot by Schikaneder is both fairy-tale simple (the daughter of the Queen of Night, Pamina, has been taken by her father to his ideal society where the light of reason prevails. Tamino, a wandering prince, is sent to rescue her but after various trials the young couple are happy to remain in the sunny realms of rationality) and at the same time insanely complicated.

There’s the totally unheralded fight with a great serpent, the magic bells and flute (well, more of a mini-light sabre here), a wide variety of obscure messages, instructions and vows of silence plus an attempted rape or two and, of course, a comic bird-catcher.

Written in 1791, the last year of his life, Mozart’s music goes beyond wonderful, moving effortlessly from the sublime embodiment of love and longing to rage, humour and serious silliness.
Opera North do full justice to the complete range, both orchestrally and vocally. They also, simply by dint of thoughtful design, help resolve the persistent problem I have with the plot.

Irrationality is, needless to say, personified in the female form of the Queen of the Night (magically sung by Samantha Hay – and how I wanted her black headdress), all dark, unchained emotion, scarily high trills and dangerous woman-power.

So she’s the baddie, but how can one not root for her? 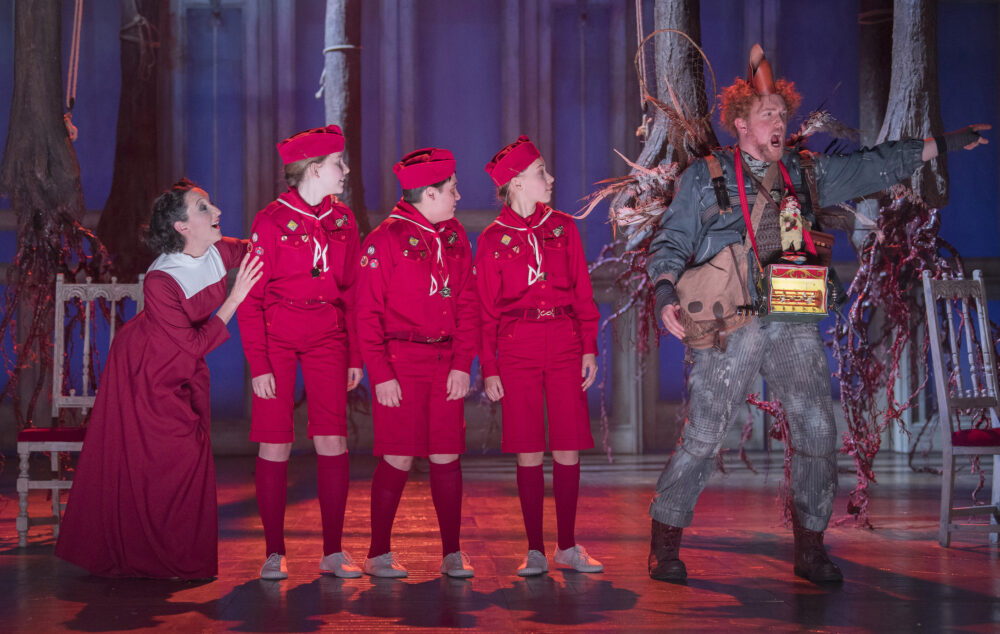 The Magic Flute from Opera North at Newcastle Theatre Royal

By contrast I find myself going against the author’s intention by resenting the cool, imposed masculine organisation of Sarastro’s realm, though if anything could make it more attractive it would be the profoundly resonant voice and tall, showman-like presence of John Savourin, half dictator, half Dr Strange.

Here his world is shown as overtly fascistic in its arid paternalism and red uniforms, the nun-like female chorus clearly referencing The Handmaid’s Tale.

Are we really meant to see this as an ideal society? Well, no – the production cleverly relocates the moral emphasis by isolating Sarastro from the final celebration where Tamino and Pamina usher in a new age of freedom amid a general hugging of children and discarding of wimples as the old restraints break down.

The other innovation is to bookend the action with the unspoken contemporary story of a young girl who, like Pamina, is torn between warring parents.

For first-time viewers this may be confusing, and I suspect it panders to the sad notion that a modern audience cannot simply sit still and listen to a purely orchestral overture.

The child in question, however, on stage for most of the ensuing opera, proves to be a potent and eminently watchable observer of the action.

The symbolic side of the fable is handled with particularly well-imagined projections, in complete harmony with the fire and water trial themes, but there’s no doubt that the audience warms most audibly to the comic elements.

Long gone are traditional references to black harem guards, but much nastier is his habit of juggling his junk through unsavoury underpants – a selfless and hilarious performance.

My only criticism is that the production is notably low on the birds that are a key feature of the original on several different levels, but meanwhile I’m sensing a new career possibility in working for the Queen of the Night.

Her three ladies provided the perfect combination of humour, energy and martial dexterity – and who wouldn’t want to dress like a light-sabre-wielding nun who’s been working in an abattoir? 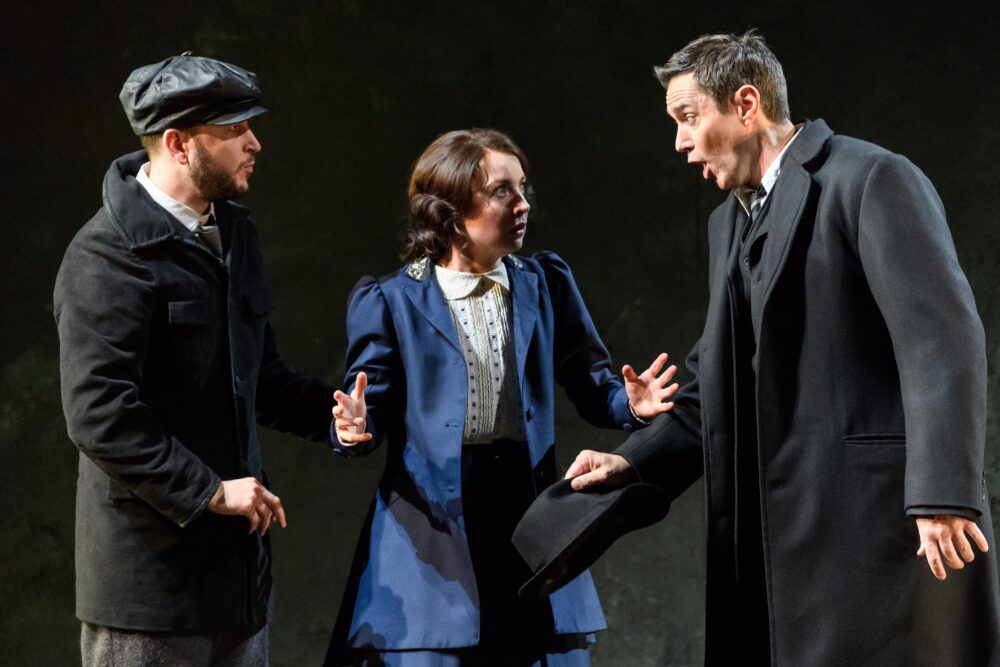 Written late in life by Czech composer Leos Janacek, this is one of three operas currently presented by Opera North dating from the years around the First World War.

Premiered in 1921, it is based on a play – and not a comedy. In a WW1 context, it could perhaps serve as a reminder that not all homes were happy ones to return to.

Katya is unhappily wed to Tichon but the real nightmare is Kabanicha, the mother-in-law from hell. She’s not happy if anyone’s happy.

Boris falls for Katya and vice versa – although weird church-related nightmares make her resist her feelings. This is a world where hell, for some, really is a fiery pit.

After Tichon is sent away by Kabanicha, Varvara, her quietly defiant foster daughter, masterminds a secret liaison between the lovers and thereafter things spiral downhill.

I was pleased Varvara ran away with her lover, the teacher Vanya. She laughs and he sings. He attributes a storm (that play was called The Storm) to natural rather than Biblical forces. I hope they lived happily ever after. 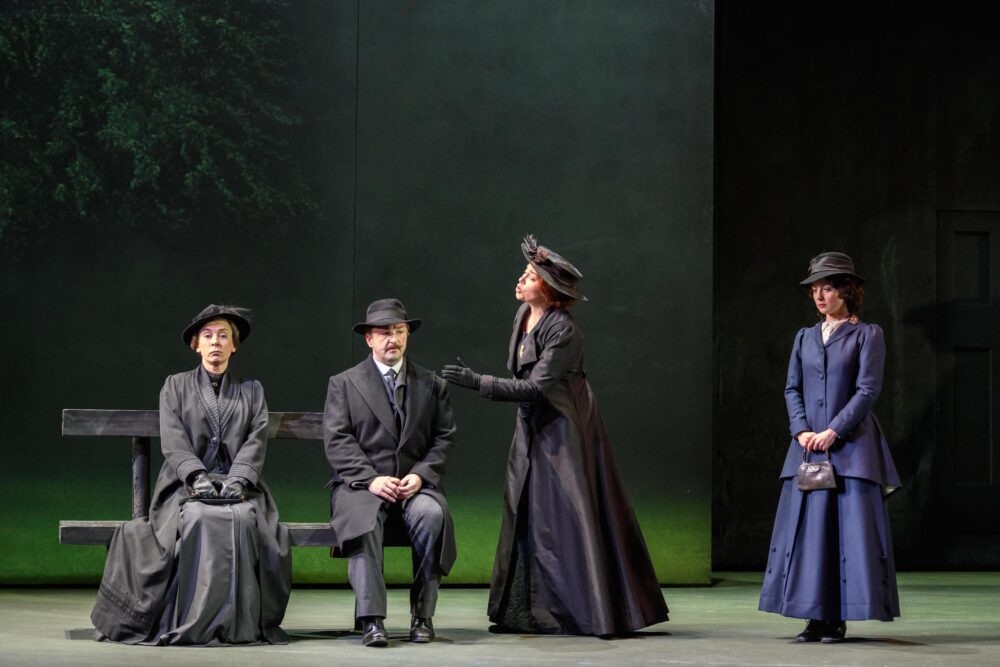 Why buy a ticket to watch such misery unfold over three acts and with no interval to put the gloom on pause?

Well, because opera finds beauty in misery. Janacek, apparently, was inspired by Madame Butterfly which even more famously illustrates the point.

From the very first low, ominous note emanating from the massive and wonderful orchestra in the pit (conducted by Sian Edwards with Gateshead-born Jonathan Bloxham credited as assistant), the spine starts to tingle.

There’s an oddness, admittedly, in an opera sung in English with simultaneous on-screen translation – in English! But it’s the music that has kept Janacek’s storm raging and Katya’s tale being re-told again and again. It sucks you in.

In this lone Newcastle airing the performances were superb with young soprano Stephanie Corley wringing every drop of tortured emotion from Katya. 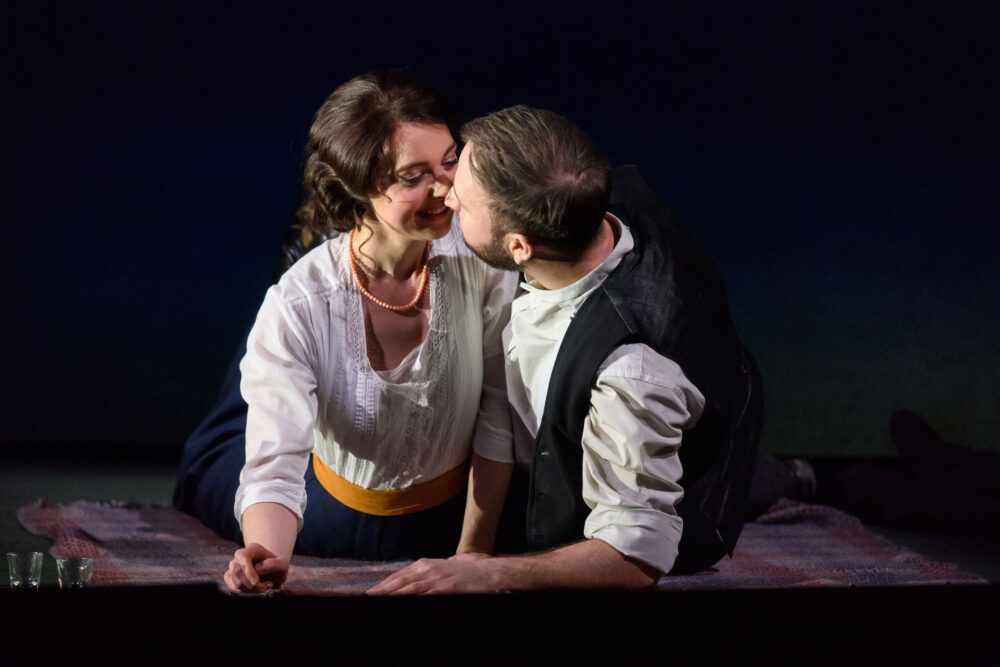 It was good to see tenor Andrew Kennedy – originally from Ashington – wheedling and squirming so effectively as Tichon.

American Harold Meers gave substance to Boris, even though the character doesn’t live up to his dashing appearance, while Stephen Richardson as bearded Dikoy looked as if he had stepped straight from a period photo.

The general appearance of Tim Albery’s production, dating from 2007, is green – a rather sickly, pond-like green with just that flash of Satanic orange to keep the sinful on their toes.

And this green landscape is populated, at beginning and end, by Opera North’s fabulous Chorus dressed like so many black crows.

And to come… review of Sunday’s double bill of Gianni Schicchi and (with Phoenix Dance) The Rite of Spring. For tickets for the latter, go to www.theatreroyal.co.uk

Back to articles
« Thought Foundation’s new exhibition is for everyBODY
Review: Opera North finale double bill at Theatre Royal Newcastle »
Share on
Share on