Jane Sanders has been stitchin’ in her Gosforth kitchen to great effect, as her latest exhibition showed before it shut prematurely. What next? David Whetstone found out. 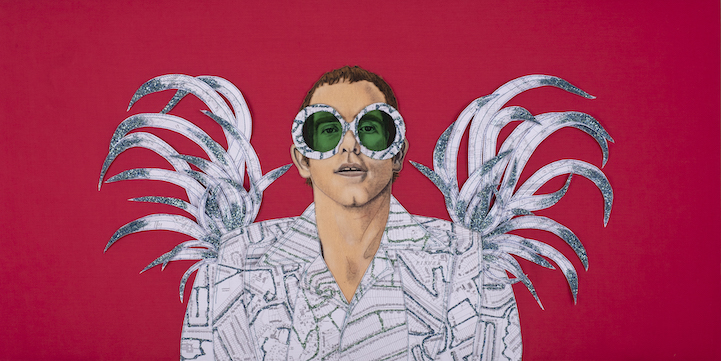 It was a wonderfully entertaining exhibition – while it lasted.

Jane Sanders, whose fabric portraits of pop stars have delighted fans around the world, is one of the many artists whose projects were cut off in their prime by the coronavirus pandemic.

She had her special preview night at the People’s Theatre in Newcastle with locals mixing with dedicated music fans, including Beata and Kim whose passion for anything Manic Street Preachers-related brought them from Birmingham and Inverness respectively.

But then a few days later the theatre shut down in line with Government advice, axing its spring-summer season – a major disappointment for the volunteer People’s company and fans of its work.

For a few days afterwards, as box office staff handled refunds, the gallery remained open to visitors so long as they didn’t stand too close to each other (it still seemed a bit of a lark in those distant days of mid-March).

Then, as the seriousness of the situation became more acute, the gallery was closed too, cutting short Jane’s exhibition – only her third ever in the North East – which should have run until April 11. 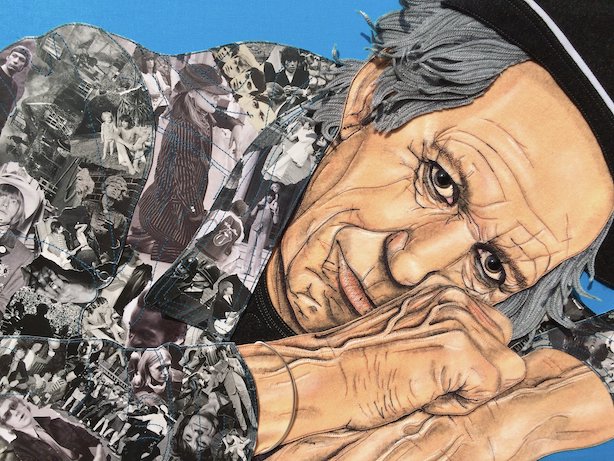 Keith Richards through the eye of Jane’s needle

It was a shame. Jane’s portraits of stars including David Byrne, Elton John, Janis Joplin, Tori Amos and full sets of The Beatles and The Who are as accessible as they are accomplished.

I particularly liked the portrait of Joe Strummer, one foot nonchalantly propped on the back of a chair and massively in your face, and the one of Robert Smith of The Cure, his thatch of black hair comprising plastic insects and mice (Jane, a self-confessed hoarder, has loads of this kind of stuff).

On the walls were 31 portraits, both originals and prints. They made for a flamboyant display, good to look at and a trigger for favourite songs to spring to mind.

Jane is philosophical about the unexpected turn of events. “I’m very lucky that I got my opening because for the next two artists after me, that’s it. It’s kyboshed for them.”

But as creative people put their creativity into overdrive, it turned out this wasn’t quite the end for Jane’s exhibition. 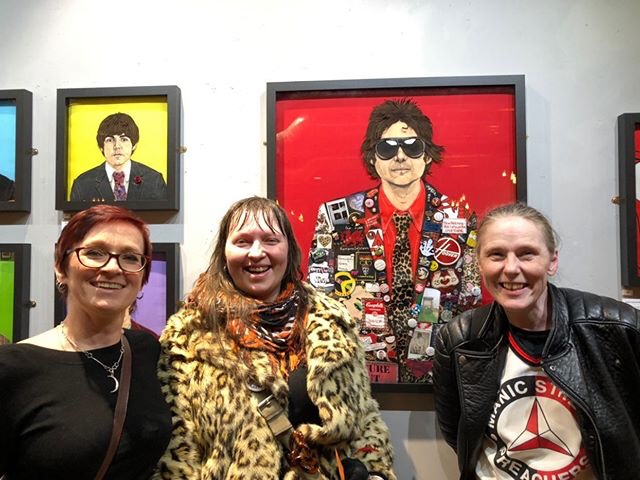 She explains: “I saw online that this guy Nick Green (a Toronto-based writer and actor) had set something up to highlight projects that have been cancelled.

“I wrote to him and sent some stuff. He really liked it and wanted more information and images and so now my work is on there. I’ve got extra followers through that.”

Nick Green’s online Social Distancing Festival can be found at www.socialdistancingfestival.com which is where you’ll also be able to see some of Jane’s pictures from the exhibition.

Everything in life is relative, of course, and Jane has bigger concerns than the fate of an exhibition. Her daughter is a newly qualified paediatric nurse in London, so subject to the stresses involved in working for the NHS in these difficult times.

Then there’s Jane’s day job, cleaning some of the big homes in Gosforth, which social distancing and self-isolation have kicked into touch. Few artists, Jane says, can rely on art to pay all the bills and she’s a single mum with a 16-year-old daughter still living at home.

Newcastle has been home since 1992 when Jane came up from Poole in Dorset to study contemporary art practice at Newcastle Polytechnic which soon afterwards became Northumbria University. 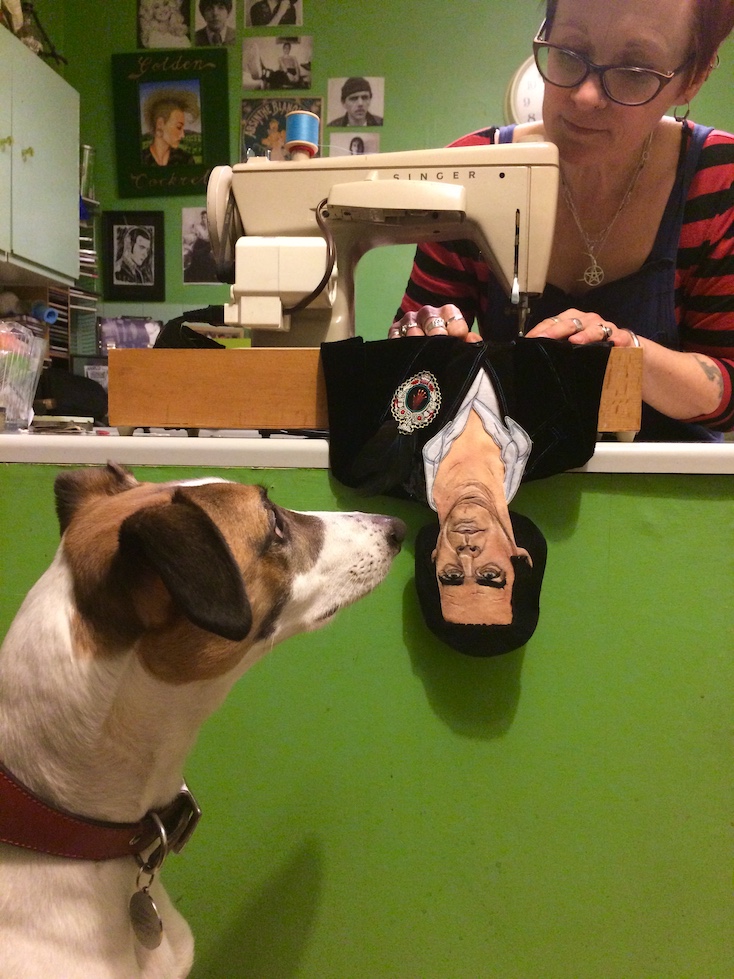 “It showed you how to get art into different places. It was a very practical course rather than being arty farty and I loved it. It was the best three years of my life.”

Jane grew up in “a proper handicraft home” where her mum taught her to use an old Singer sewing machine which is still her tool of choice. “I became an expert on it when I was still quite young.

“At Northumbria I was studying painting but because the course was so diverse, I used a lot of mixed media – and I always used textiles in my paintings. I started using a lot of sewing techniques.

“I found I really, really loved sewing and I also listened to Peter Blake (the British pop artist) who has been one of my influences. His advice was to do what you really like.

“I loved music and I loved sewing so I just put the two things together.”

Stitching is Jane’s thing and the kitchen is where she settles down with needle and thread after the day job, hence her ‘stitchin’ in the kitchen’ moniker. You don’t need a thumping great studio, she says. You just have to tailor your art to your circumstances. 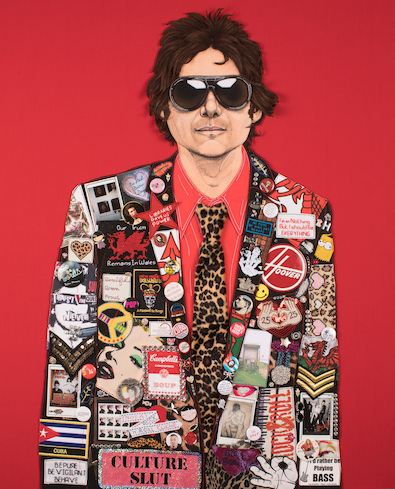 Nicky Wire, as stitched by Jane

Her first kitchen-generated pop star portrait was of the visually arresting Amy Winehouse.

“I worked out the technique of how I could transpose aspects of a photograph onto material and then put my own stamp on it,” Jane recalls.

“My line work is really good so I never set out to copy a photograph. I’m always keen to create my own image.

“That picture of Amy Winehouse came out really well and it was then I discovered the delights of Instagram. It opens up the world market so at the click of a button my images can be in China or Australia.”

It didn’t take Jane long to realise that online fan forums will home in on anything relating to their idol.

The Amy Winehouse portrait duly went to a female fan in Texas.

“In general,” she says, “I do who I love. I love David Bowie. He has so many looks that I could easily do 40 pictures of him. But I’m a working artist and I want to sell work as well as make it.

“You’d think if I did a lot of Elvis it would sell but there’s a lot of Elvis stuff out there. Sometimes I find a more obscure or cult artist will do better.” 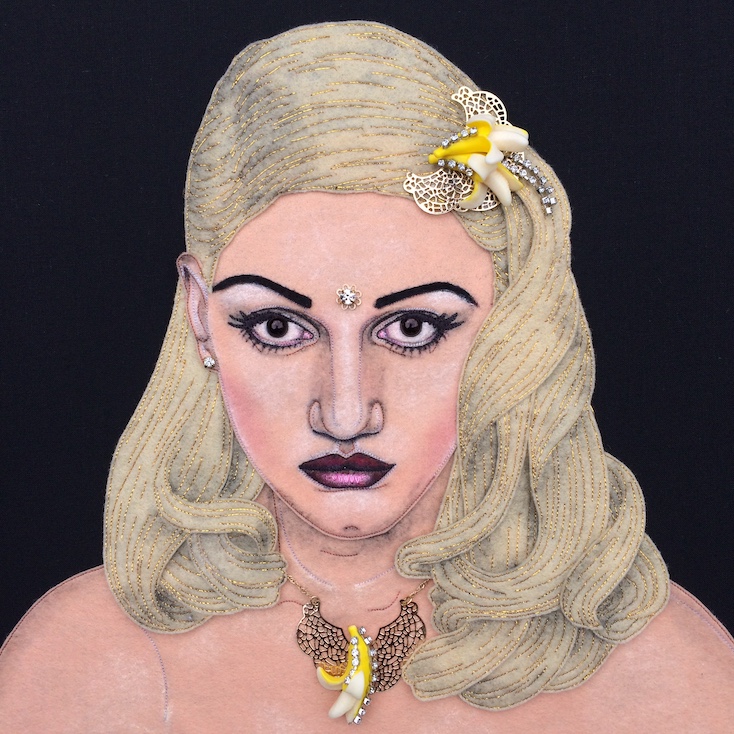 Nick Cave and Shane MacGowan fall into this category and were in the exhibition. The MacGowan portrait drew an appreciative response from his partner who assured her Shane and his Pogues pals loved it too.

Jane is particularly happy with her portrait of Nicky Wire of Manic Street Preachers, which she describes as a collaborative effort. She portrayed him wearing a black jacket and invited fans to donate slogans and badges to jazz it up.

“I got stuff from Australia, Hawaii, all over. It’s like a collective portrait. I feel it belongs to lots of people which is why it’s not for sale.”

People who idolise these performers would probably be gratified to learn that Jane likes to listen to the music of whoever she’s working on. She believes it seeps into the piece, not tangible like the stitching but there all the same.

Jane, the working artist with bills to pay, is keen to stress that she does take commissions.

Dolly Parton was a commission from the United States and, in what looks like something of a departure, she has been asked to do a portrait of the late poet Seamus Heaney.

She’ll listen to his poetry when she makes that one, she supposes. It could open a new sewing avenue of literary greats for when she runs out of pop stars, although that does seem unlikely.

Another place to see more of Jane’s distinctive work is on her website www.janesanders.com where you can also find out how to buy one of her portraits or commission her to make one just for you.

Back to articles
« Review: Measure for Measure from the RSC at Newcastle Theatre Royal
In My House is a lockdown anthem to get down to »
Share on
Share on