Who better than an astronaut to launch a Space Zone attraction? David Whetstone was there to see it happen. 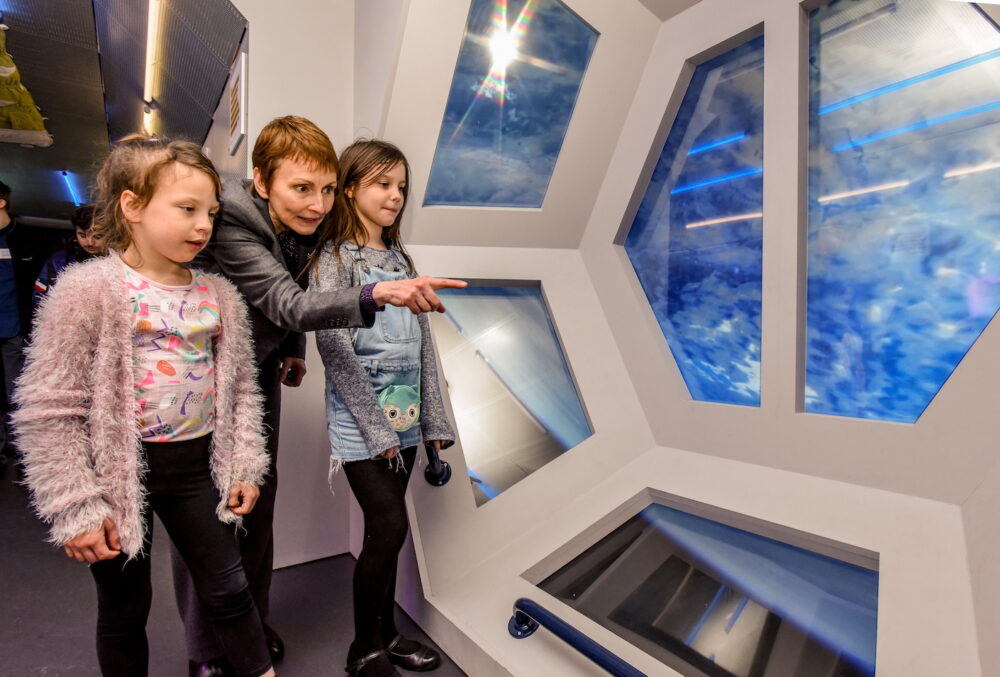 Impressive it is, too, including a mock-up of part of the International Space Station (ISS), a Mars Rover which you can ‘drive’ over a Martian landscape, a giant digital globe and a piece of moon rock you can touch.

It was in 1991 that Helen, a 27-year-old chemist, was blasted skywards in a Soyuz spacecraft and spent eight days orbiting Earth in the Mir Space Station as part of a joint Soviet-British enterprise called Project Juno.

Helen, from Sheffield, had heard the call out for a British astronaut two years previously on her car radio and applied.

Since more than 13,000 others did the same, she awaited the decision more in hope than expectation.

But Helen, who had worked for confectioners Mars, proved to be just what they were looking for. As exhibition developer Sarah de Launey told the launch audience, she was “calm, friendly, professional and a good team player”.

Helen was a rare beast then as now. In 2015 Tim Peake became only the seventh UK-born person in space. You could seat all of them around a café table at Life. 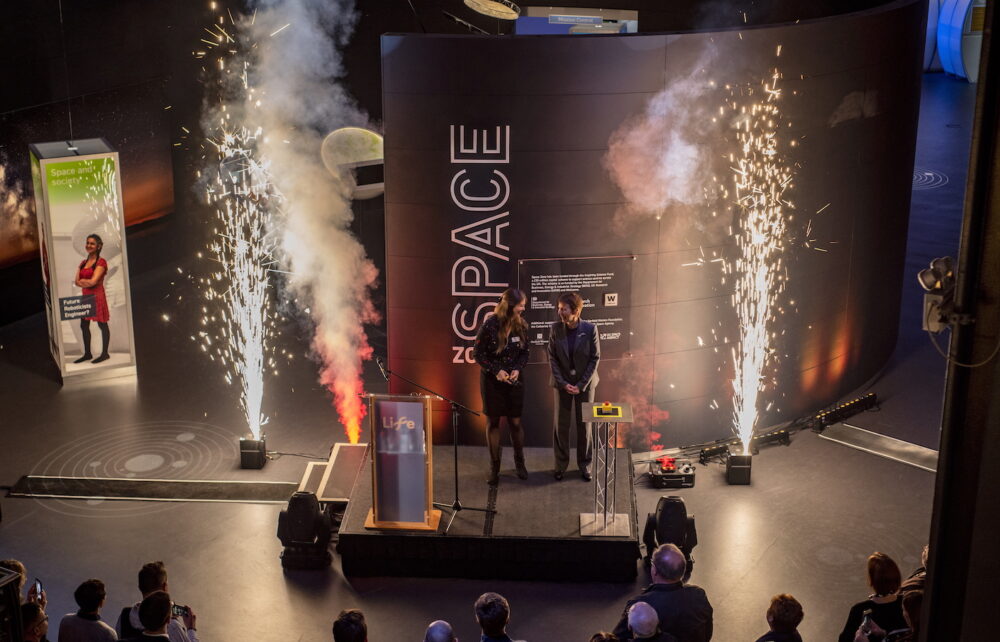 You can see why Helen might have stood out in 1989. She exudes enough fizz to keep several satellites spinning and doesn’t deny she’d be back up there like a shot given the chance.

“I’m absolutely gobsmacked by the creativity that has gone into such a fabulous learning zone,” she enthused after a Space Zone tour on which she demonstrated a winning way with children.

She was “passionate” about space, she said, and could think of no better subject for the new exhibition, although she admitted: “I might be a bit biased.”

Science could be “pretty dry on occasion”, she said, but space was full of tantalising possibilities.

She spoke of scientists growing protein crystals whose space-related research might identify cures for diseases like Alzheimer’s and Parkinson’s. Then there was the mystery of life itself.

“Maybe,” she said, “life originated in amino acids brought to Earth by meteorites.

“It is interesting to consider what forms of life might be out there in the universe with its billions of stars.”

Space travel, she told the audience, put everything into perspective.

“Looking at Earth from space (while orbiting it 16 times daily at 80 kilometres per second, as she had done) it’s just obvious how everything is inter-connected.” 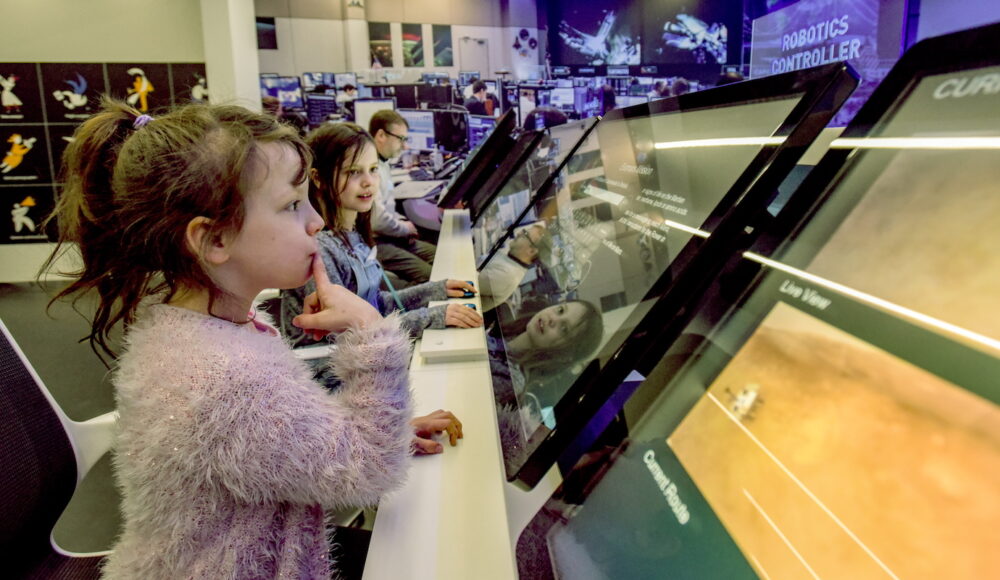 The International Centre for Life, incorporating the Life Science Centre visitor attraction (often referred to simply as ‘Life’) along with medical science-related research labs and businesses, was a millennium project opened by the Queen in May 2000.

It was built on the site of the old Marlborough Crescent bus station and a derelict plot that had served as a carpark. It was also once the cattle market, which accounts for the restored stone building in Times Square which used to be the market keeper’s office.

But that was then…

Speaking ahead of Helen, founding chief executive Linda Conlon said: “It’s our 20th birthday so this year is a very special one for us.

“It’s a really, really great time to launch two big projects, the Space Zone and a new Making Studios (this the place to try lots of craft-related activities).

“I think it’s fair to say that we all have an abiding fascination with space. It’s a subject that stirs us like no other, so when we got the chance to create a new exhibition at Life it was an easy decision. It was what visitors told us loud and clear that they wanted.”

Linda said all the North East universities do space-related research and more than 100 researchers had given their time to an exhibition designed to encourage others to follow in their footsteps.

“I’m sure Helen will agree with me that there is a real connection between the STEM (that’s science, technology, engineering and maths) subjects that kids study and the potential careers open to them in space travel and exploration.”

That, in fact, is one of the eye-opening aspects of Space Zone. 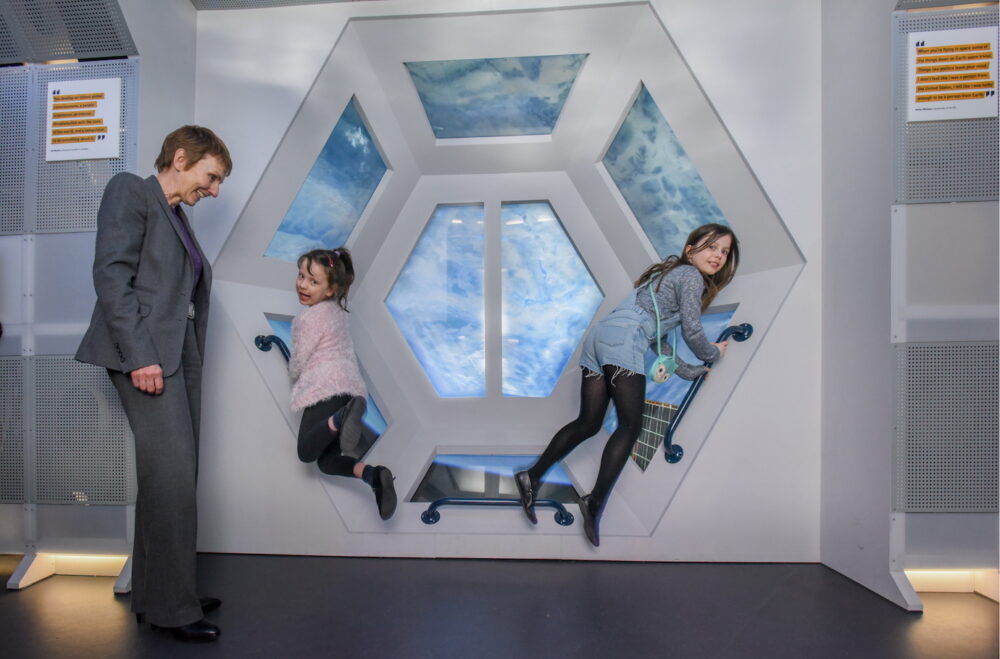 While astronaut clearly remains something of a fantasy aspiration, the exhibition lists other possible careers including flight surgeon, space junk expert, space sniffer (yes, NASA apparently does employ ‘nasalnauts’), astro-photographer and roboticist. Then there are all those researchers.

And while most people probably assume the North East is light years away from the action, Space Zone reminds us that stuff does happen here. There’s a North East firm that builds small rockets and the region, with its dark skies, is a magnet for stargazers.

In the exhibition’s Mission Control, with a spacewalking astronaut on the big screen, you can sit at a computer and plan your own research mission.

In the recreated ISS, you can get an insight into life in space. There’s an example of the ‘space salad’ cultivated by onboard scientists to help agriculture on Earth and with a view to longer space missions to Mars.

There’s also a discussion about the smell of the place. Tim Peake, when inside the ISS, sensed “a little of a British summer barbecue, burning sausages on a charcoal grill”. American Scott Kelly reckoned it smelled “like a jail… combinations of antiseptic, garbage and body odour”.

Screens, buttons to press and yucky smells… what child could fail to be seduced?

Space Zone is a permanent exhibition at Life, although management say they retain the flexibility to accommodate temporary exhibitions.

The principal funder, granting £2.6m for Space Zone, the Making Studio and a programme of community engagement, was the Inspiring Science Fund which is run by the Department for

Business, Energy and Industrial Strategy, UK Research and Innovation and the Wellcome Trust.

It was represented at the opening by Mike Sarna who said it was wonderful to see the Centre for Life inspiring people about science and welcoming local communities in.

For details of admission times and prices and the full programme at the Life Science Centre, Times Square, Newcastle NE1 4EP, visit www.life.org.uk or tel. 0191 243 8210.