David Whetstone reports on Inside Writing, a welcome newcomer that proves it takes more than a pandemic to kibosh a poetry festival.

Inside Writing Festival is a new digital poetry festival

The annual Newcastle Poetry Festival, planned for May, was another victim of the pandemic which has given this year’s cultural calendar a lean look.

All has not been lost, though.

In place of the original, with all the social intimacy it would have entailed, comes a digital poetry festival called Inside Writing.

While it might have been devised to fill a void, who is to say it won’t throw up some interesting new ways of going about things?

Prof Sinead Morrissey, director of the Newcastle Centre for the Literary Arts (NCLA) and co-director of the festival with predecessor Linda Anderson, calls it “a real cause for celebration at a time of such national uncertainty”.

And she adds: “We’re looking forward to the wider conversations the festival will spark about creativity, crisis and change.”

The action can be followed on the festival Twitter and Facebook pages with the bonus of a wealth of archive material to dip into.

There you can see and hear Australian poet Damen O’Brien reading The Handshake, powerful winner of this year’s £1,000 Newcastle Poetry Competition.

In the poem, reflecting on an encounter between a bereaved father and a representative of the regime that killed his son, the handshake – crucially missing in this account – was a chance “to reach out” and “to show amity and kindness, in our separate galaxies of skin”. 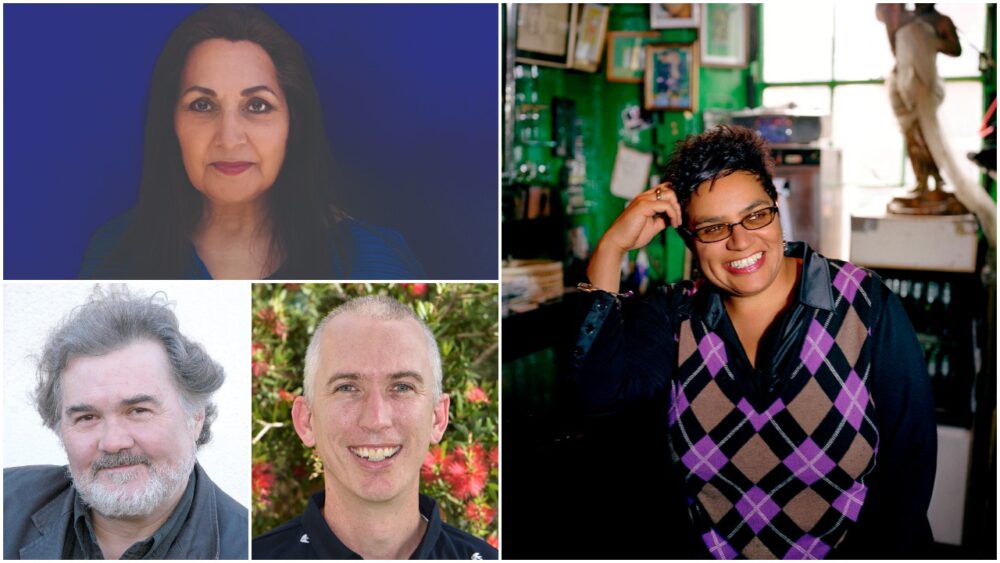 Clockwise from top left: Imtiaz Dharker, Jackie Kay, Damien O’Brien and Sean O’Brien are all contributing to Inside Writing

Judge Collette Boyce, herself an award-winning poet, says: “Neither I nor the author could have imagined, when The Handshake was submitted, that the simple handshake would be outlawed at time of reading, along with so many other gestures of connection.”

Online you can also see poets Natalie Crick and Pippa Little reading their second- and third-placed entries and the five whose poems were highly commended.

Eleven poets were judged winners of the Young People’s Poetry Prize, for ages 11 to 17, and there are plenty of precocious gems amid the entries which can also be read online.

The judge, Vidyan Ravinthiran*, clearly had his work cut out but it seems he was amply rewarded.
In all the winning poems, he says, “there’s a moment, or, longer than that, a duration, where language comes alive – it sparkles, flares – and words, rhythms, images achieve a compelling fluency”.

Many people seem to have been finding comfort in poetry while the virus has been swelling the legions of frantically worried or bereaved and forcing all of us to be physically stand offish.

It has been prominent on social media and Simon Armitage, the Poet Laureate, has been on the radio quite a lot.

Among the poets contributing to Inside Writing are Inua Ellams, Sasha Dugdale, Rishi Dastidar, Carolyn Forché, W. N. Herbert, Jackie Kay and Sean O’Brien, most of whom work for or are closely associated with Newcastle University and NCLA.

And there’s another – Imtiaz Dharker, the celebrated poet (born in Pakistan, brought up in Glasgow) whose collections all bear the imprint of Bloodaxe Books, that North East powerhouse in poetry publishing, and who was appointed Chancellor of Newcastle University in January.

We are promised that all will perform new work during the festival while also issuing challenges and writing prompts and discussing how their lives have been affected by coronavirus.

Festival partners the Poetry Book Society (headquartered in Newcastle) and the Institute of English Studies are also contributing, the former co-hosting a showcase of recently selected poets and the latter commissioning writers and academics to respond to the work of the festival poets with micro-essays.

The action is taking place online from now until July 31 and you can be audience member or contributor from the comfort of an armchair or the gloom of a garret.

You’ll find the gateway to the Inside Writing treasury of offerings and opportunities right here.

* Vidyan Ravinthiran teaches at Durham University. There’s an interesting piece by him “on being a poet” on the New Writing North website.