Goldilocks and the Three Bears: Is this one just right?

Sam Wonfor’s first panto outing of the season was Goldilocks and Three Bears at Newcastle Theatre Royal. Fuelled by interval red wine, she’s reporting back via the medium of a Q&A, because it seemed like a really good idea about halfway through the second act. Bear with. Every pun intended. 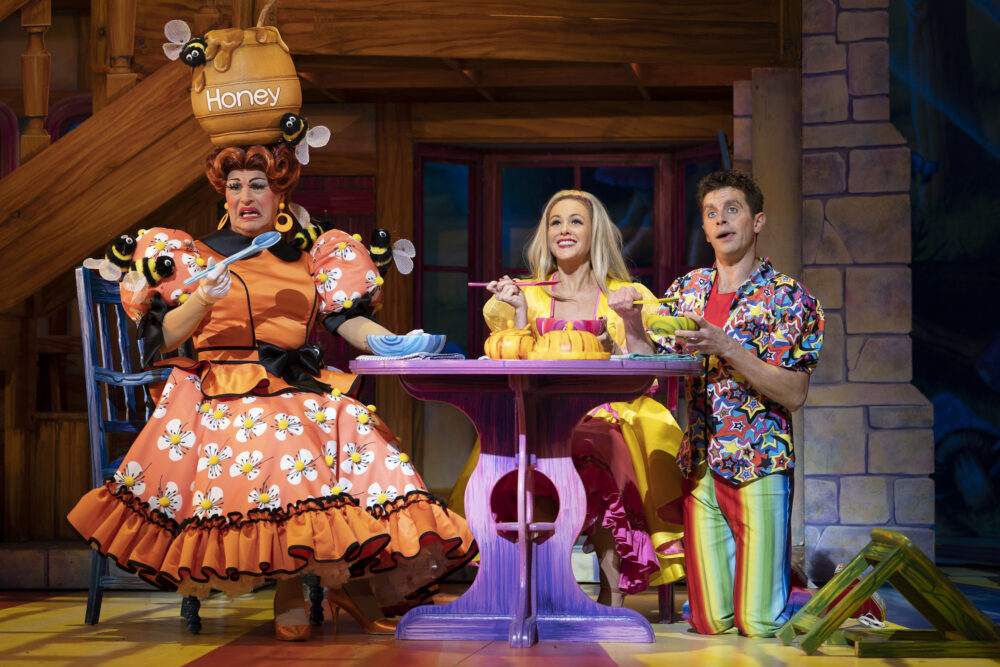 How much of this pantomime is devoted to the traditional plot of Goldilocks and the Three Bears?
Approximately four-and-a-half minutes. Yes, anyone rocking up with plans to see a faithful ‘who’s been sitting-in/eating/sleeping-in my chair/porridge/bed’ retelling of the story will need to manage their expectations.
SPOILER WARNING: (and start the clock)
They find the house, they eat the porridge, they break a chair, they fall asleep in the beds only to be discovered by the Three Geordie Bears who have got a right cob on, but are quickly placated by a promise from Goldilocks to keep them safe from the clutches of the dastardly Baron Von Vinklebottom who has plans to make the the stars of his highly unethical and animal-filled circus.

A circus, you say. Sounds like an ideal opportunity to bring together the two passions of father and son entertainment powerhouse Clive Webb and Danny Adams – namely the Theatre Royal pantomime and their rest-of-the-year show, Circus Hilarious. Would that be correct?
Yes. It would indeed. This is a circus pantomime if ever I saw one. I mean I haven’t seen one before, but I know it when I see it. There’s acrobatics, jaw-dropping juggling, right royal rollerskating daredevils, death defying shenanigans and a ringmaster with a top hat. The case rests.

What new string has Danny added to his bow this year?
Known for learning something new to impress the audience with each year, I can confirm that Danny Adams has once again made an addition to the section of his CV subtitled: The Skills.
I won’t spoil the surprise, but I will say that special shoes are required, and my seven-year-old watched all the action through her fingers. 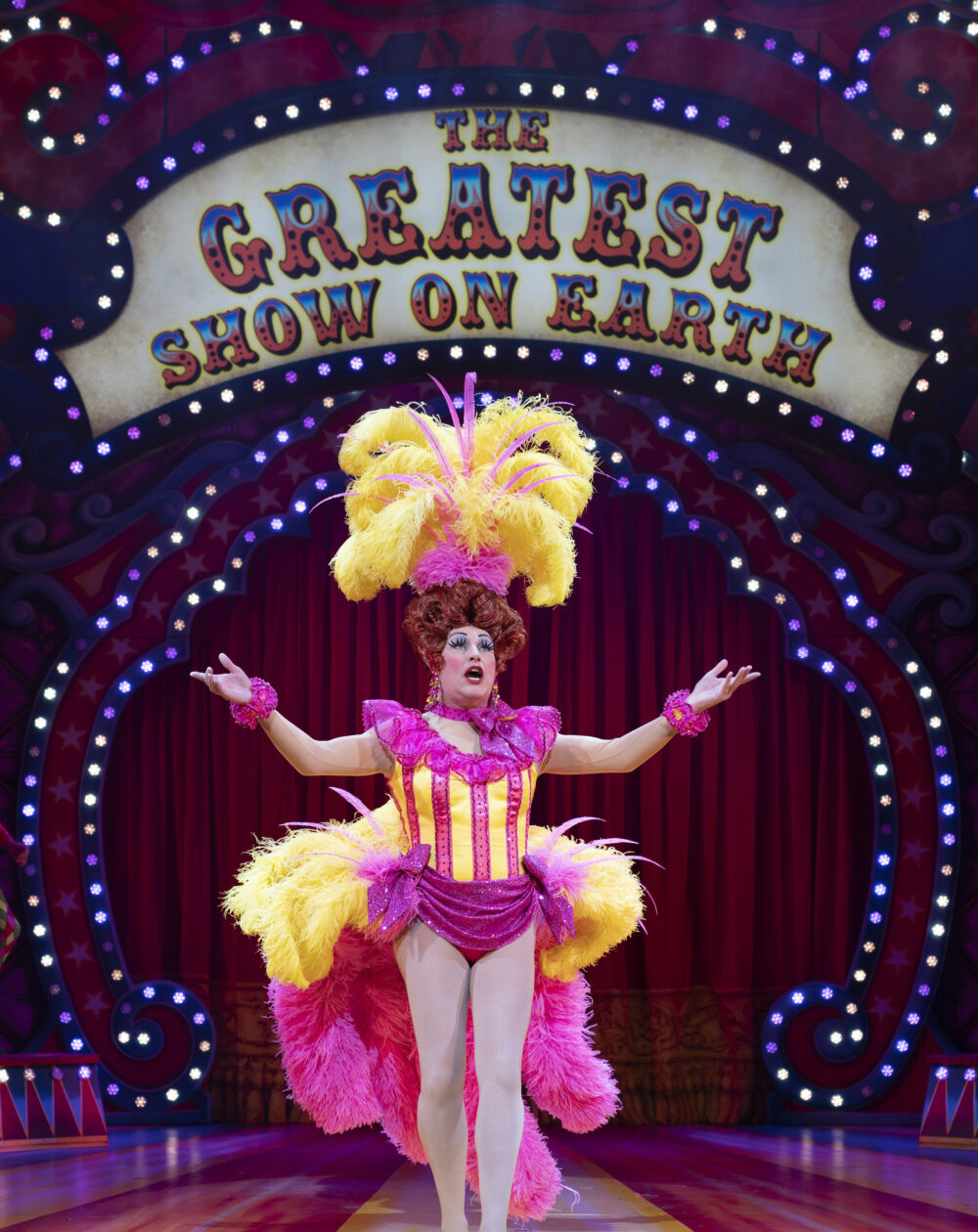 Is there no end to Chris Hayward’s fabulous costumes?
Simply, no. The Theatre Royal’s resident dame – Hiya Hinnie! – has once again raised the bar when it comes to panto glamour. One can only imagine the structural engineering that was going on under that pink leopard print playsuit. 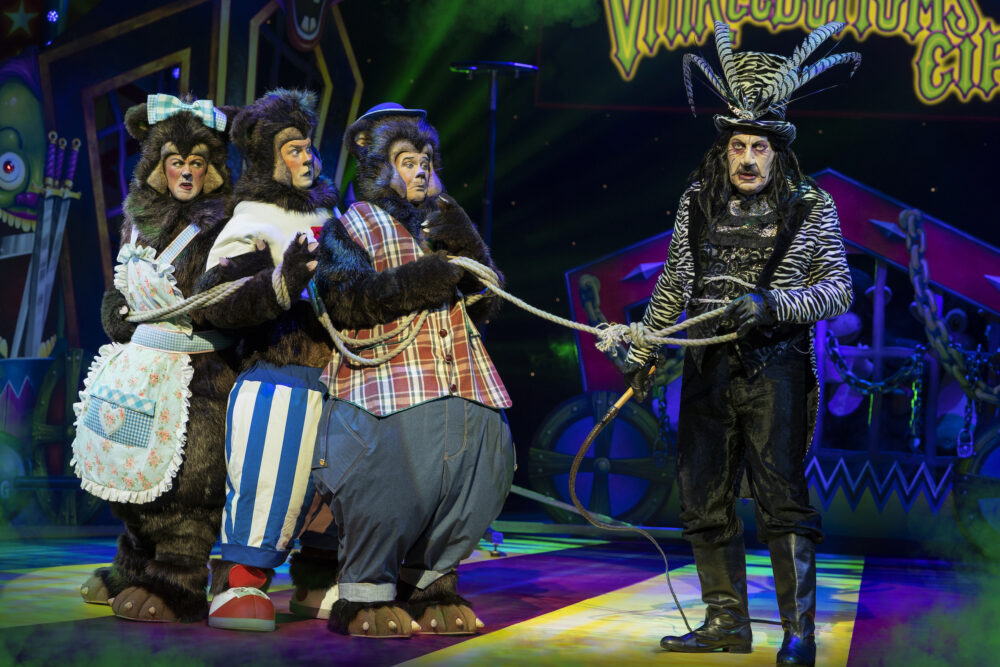 Oh hey. Have you ever wondered what would happen if you crossed the childcatcher from Chitty Chitty Bang Bang with Boy George circa the 1983 video for Victims?
I’m so glad you asked. Baron Von Vinklebottom, that’s what. Fixtures and fittings baddie, Steve Arnott returns in sterling fashion as the asshat animal-hater of a circus master who needs to be put in his place, namely – #spoileralert – a small cage.

How many times do you have to repeat a tongue twister including the words: Sushi, Sharon, Shoe Shine, Sitting, Sure and Saturday before a post-watershed word falls out of your mouth.
Not that long as it turns out. But in related news, that moment was in our kids’ top three highlights in the taxi-home review.

Hang on a second. Is that Paul Gasgoigne’s son, Regan, in the ensemble?
Well yes. Yes, it is. Having clocked up pantomime credits in Jack and the Beanstalk and Snow White, to say nothing of appearances in The Nutcracker for English National Ballet and the MTV Europe Music Awards, Regan is putting his performing arts training to smashing use. 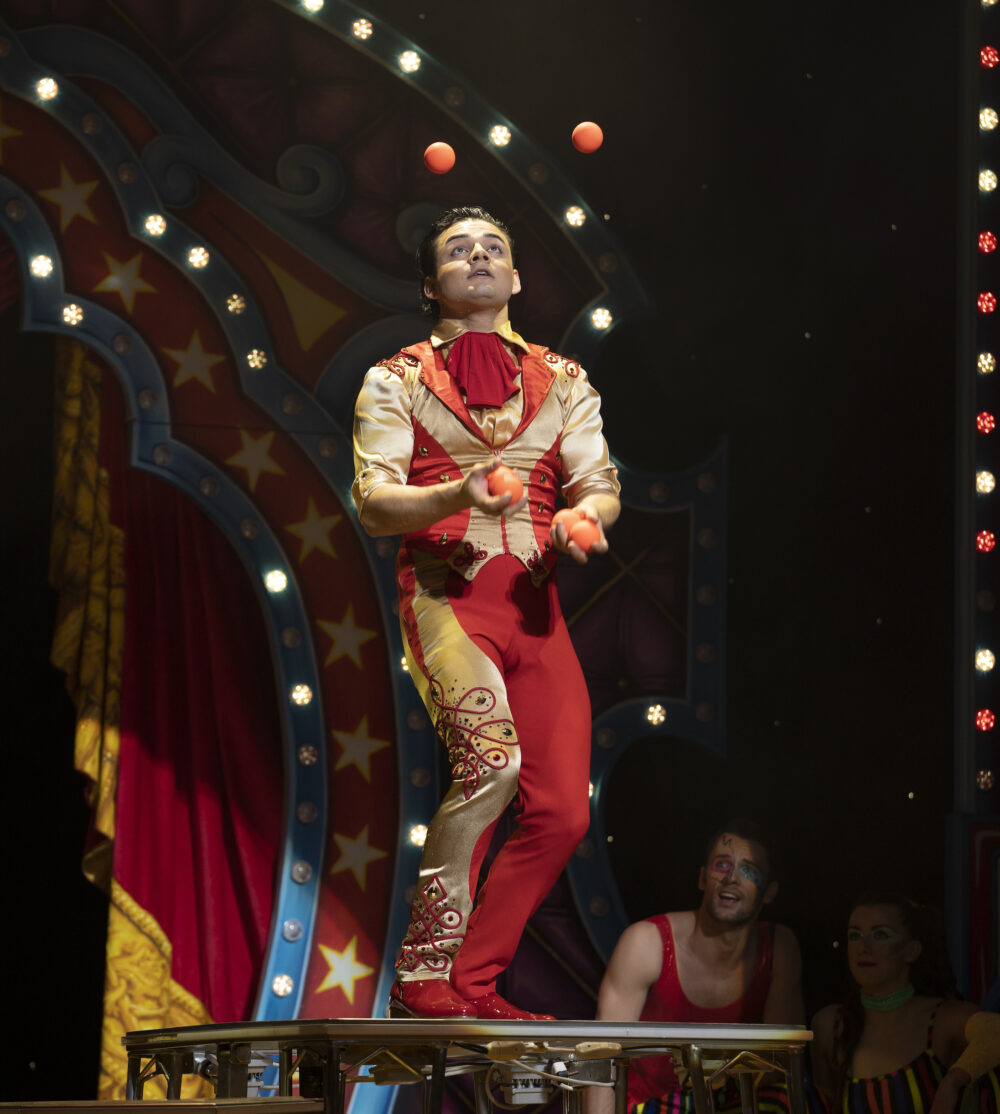 Fair play. Now then, next question. Do you think there is a person in the world who can combine mind-boggling juggling tricks with the ability to hold themselves horizontally to a metal pole?
Well, indeed yes. That would be The Great Juggling Alfio, (surname Macaggi) – pictured above -who is a fourth generation circus artist from Spain. He was given three juggling balls for Christmas when he was six and the rest is Big Top history.
I can’t help thinking I should have made more of an effort with the magic set I got in 1981… 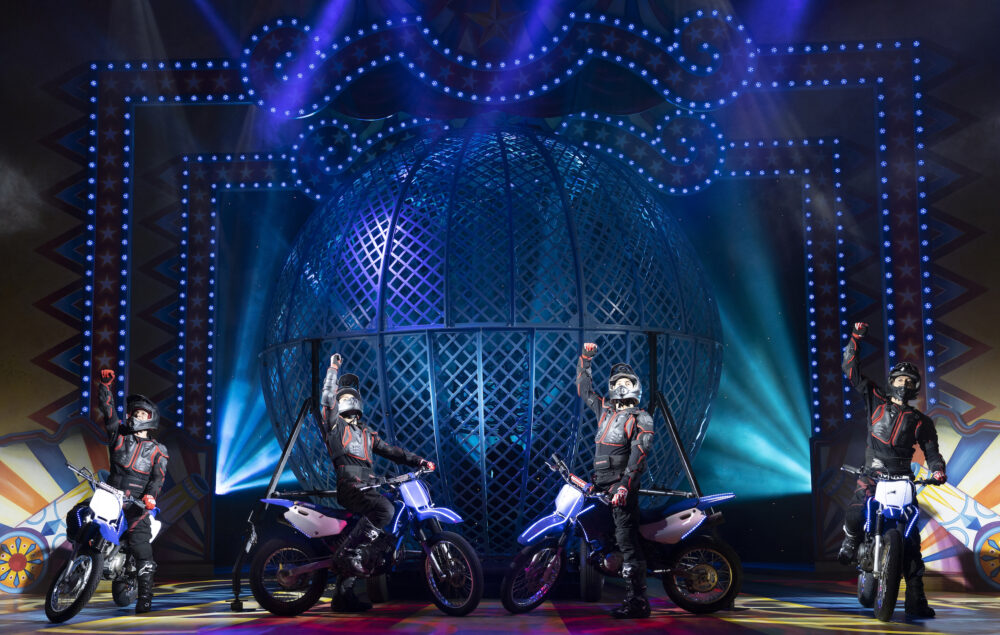 How many motorcyclists (yes, riding their accompanying motorbikes; don’t get smart) can you fit into the old final round globe from the Crystal Maze?
Unbelievably, so many that I’m not going to spoil it. I wouldn’t dare take away the chance of an awe-soaked ‘no way’ – like the one my 11-year-old mouthed as the last member of The Berserk Riders – led by Brazilian Lucius Zafalon – started his engines.

Does the 12 Days of Christmas routine ever get old?
Not as long as there are rogue fire extinguishers; a Dame who hasn’t glued her wig on properly; opportunities for mass audience participation and a crash mat in the orchestra pit. Bravo. 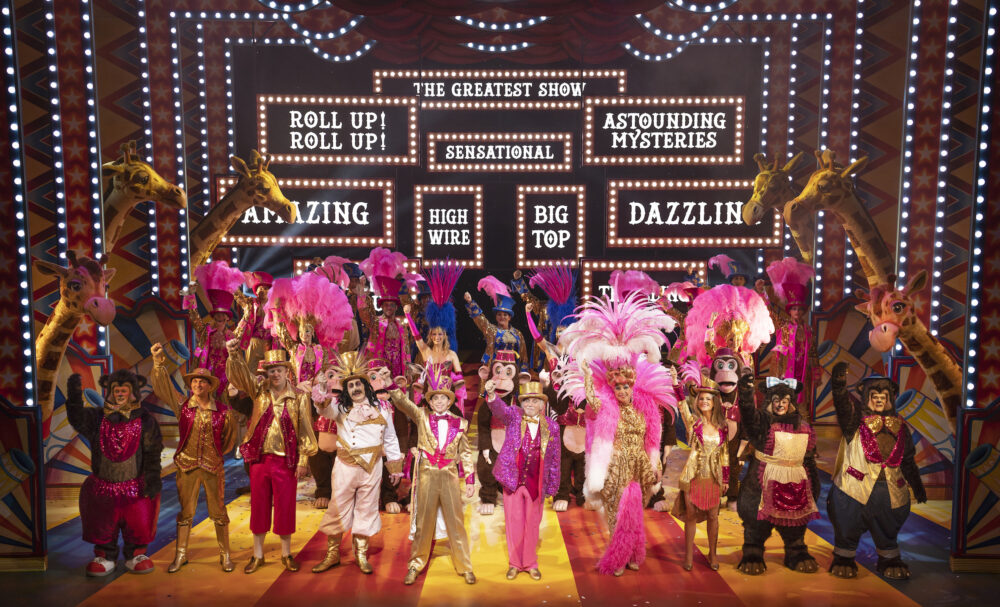 After 14 consecutive years, can Danny Adams, Clive Webb and the team who they, together with Wallsend-born writer/director/producer Michael Harrison, have assembled over the years still cut it?
As long as they’re getting standing ovations and my daughter is telling me that ‘this is one of the best memories I’ve ever had’… I think they’re hitting their mark.

Following on nicely, can two hours of clapping, finished off with a fit of whoops and cheers get you over the line for your Fitbit target steps?
It absolutely can.

And finally, will the Theatre Royal reinstate the interval mulled wine option next year?
I very much hope so… I never thought I’d ever find a free glass of red wine disappointing. I know that sounds the worst kind of spoiled, but you did ask.

Goldilocks and the Three Bears will be raising the roof at Newcastle Theatre Royal until January 20, 2019 (I know, crackers isn’t it?). Call 08448 11 21 21 or visit www.theatreroyal.co.uk to book tickets.