There’s been something wonderful going on right under Sam Wonfor’s nose for the past 15 years and she’s only just found it, thanks to an inspiring piece of theatre-in-the-making which will be staged this weekend. 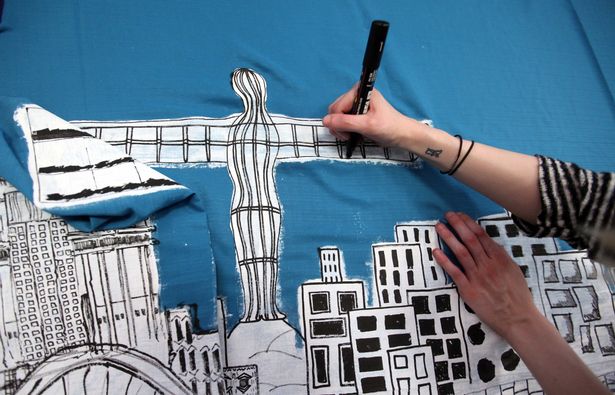 I’ve lived in Heaton for more than 6,000 days. Most of those days have involved a trip into Newcastle. Many of those trips have involved me passing Blackfriars Hall on New Bridge Street. Sometimes twice.

But not one of those trips has resulted in me knowing one jot about what goes on inside.

Actor Paula Penman puts it perfectly. “I come past this building all the time. All the time,” she says. “For this to be happening in this building and us to not know about it… is both incredible and outrageous.”

We’re chatting in a little blue room upstairs in the aforementioned building, which offers a home to a pretty amazing charity devoted to providing creative-based services for people with mental health problems.

The mission which underpins Chilli Studios is to promote social inclusion and interaction, develop skills, build confidence, encourage resilience and enable potential – all through a spectrum-spanning range of creative opportunities and a community rooted in inclusion and acceptance.

Having not known it existed up until a few weeks back, Paula has been making up for lost time after being brought on board as part of professional creative team working together with members to devise and put on a theatrical performance in Blackfriars Hall – also as ‘downstairs’ – this weekend.

She is joined by award-winning writer Laura Lindow, director Steve Byron, fellow actor/ musician Zoe Lambert and musician Ziad Jabero, who leads regular music and creative writing sessions at Chilli Studios, and who was instrumental in getting everyone together.

Laura says: “I had worked with Ziad previously and had been listening to his music for years and years (Ziad is a member of North East-based world music legends, The Baghdaddies).

“I didn’t know anything about Chilli, but he got in touch and said they were looking to involve professional creatives in making this piece, while really making sure the performance still completely belonged to the members.

“The brief was to work together to celebrate the place itself,” she continues, “as well as looking at some of the underlying issues which brought people here.”

Established in 2004, when it was called NAGAS (Newcastle and Gateshead Art Studio), Chilli Studios is headed up by studio manager, Bob Malpiedi.

Open from 10am to 4pm four days a week, members can take part in a wide range of creative activities including ceramics and pottery; print-making; watercolours; music jamming sessions, the Chilli Choir; a sewing circle; graphics and image editing; creative writing workshops and much more.

These all take place in a Tardis-like network of rooms and studios which are buzzing with activity in all directions.

There’s also a cracking cafe and shop, which sells the creative output of members and is well worth a once-around.

Ziad, who is co-producing the performance, says: “It’s a really brilliant place which does an amazing job of keeping everything inclusive, making everyone feel involved and taking away any stigma.

“That’s what we wanted to convey with this piece, which has been made possible with a grant from the Morrison’s Foundation.” 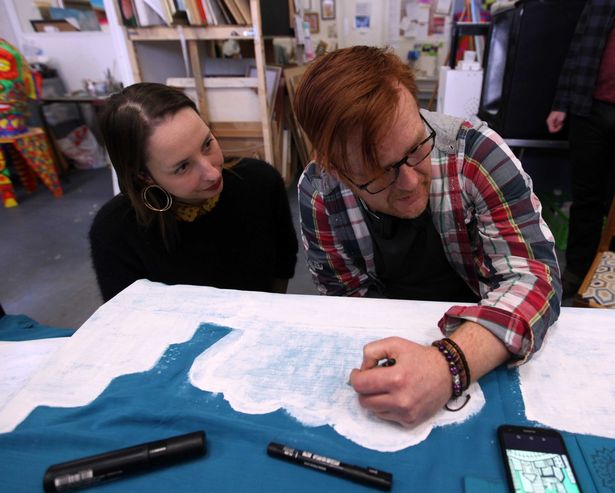 Once Ziad had signed up the team, they started working with members to build up their confidence, bring out their stories and find out what they wanted to say.

“For some people in this building, it can be difficult to open a door and walk into a room where there’s people they don’t know,” says Paula.

“So these sessions were very much about relationship building and fuelling confidence. It’s been wonderful. Very inspiring.”

When it came to developing the story the members wanted to tell, Laura and Ziad led on writing sessions, which were all about free expression and the dissolving of boundaries.

“From that, I started pulling together a narrative – again in full consultation with everyone – and it became sort of like a fable; a piece that could hold a bit of emotional realism but that could also be a bit fantastical.”

Billed as a ‘lyrical tale celebrating those who find the beauty in the breakage’ the story which will be told on Saturday (March 30) afternoon, follows a man, weighted down with the words he’s gathered throughout his life.

Set in an artistically-licensed Newcastle and Gateshead – the audiences will hear about ‘Falling’ not Felling; and the ‘Spine’ Bridge as opposed to the Tyne one – the man finds his way to a special and safe place (sound like anywhere we’ve been hearing about?) and meets more characters who are there, and who have lost something.

“The idea is that the story is told by this storytelling choir,” says Laura. “It’s kind of magical melancholy but it’s uplifting in its heart.

“All of the writing done with the members is threaded through. It feels very owned by them – but it should feel owned by the audience as well. It’s not a story of difference, it’s a story of us all.”

A two-week development and rehearsal period has seen the whole team work together on everything which will be seen and heard during the performance – from pottery which will feature on the set to a dramatic skyline mural which will serve as a striking backdrop – even those who aren’t performing wanted to make their contribution. 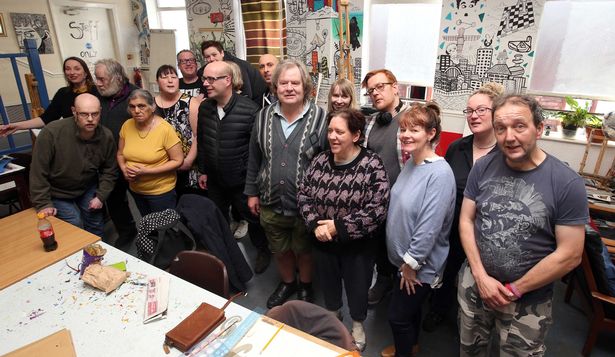 Ziad says: “What’s been great is that Steve has based us very much in the communal area – in the place where everyone comes to make tea as well as sit and work.

“Gradually people have been inspired got involved – and we’ve absorbed what’s going on around us. It’s really made the play part of what’s going on here. Everyone is so energised and making stuff everywhere you look. It’s wonderful.”

It’s an observation echoed by director Steve, who recently received rave reviews for his co-writing and performance in Bacon Knees and Sausage Fingers at Alphabetti Theatre.

He says: “As soon as I walked into the building I just felt warmth – it was such an amazing space to be in.

“This place completely shatters any ill-informed label that people might find themselves putting on people who are living with mental health struggles. You’ve seen all the artwork, all the creativity all the kindness on display.

“Yes, people will have bad days, but basically this is a group of warm, wonderful, creative people. It’s been quite overwhelming to see how much everyone has embraced this project.

“The process has absolutely been as important as the performance we’re working towards.”

Laura agrees. “It will be a real celebration of what the process has been. I would love as many people to come and see it.

“It will be beautiful and will wear the endeavours of the work that everyone has put into it.”

• Finding Away will be performed at Blackfriars Hall, New Bridge Street, on Saturday, March 30 at 5pm. To reserve tickets, which are Pay What You Feel, visit www.chillistudios.co.uk where you can also find out more about the charity.