Dipping into the Winter Exhibition at the Biscuit Factory

A bestseller at The Biscuit Factory, Rob Van Hoek is the headline artist at its Winter Exhibition. He spoke to David Whetstone ahead of this weekend’s 24th annual Ouseburn Open Studios event 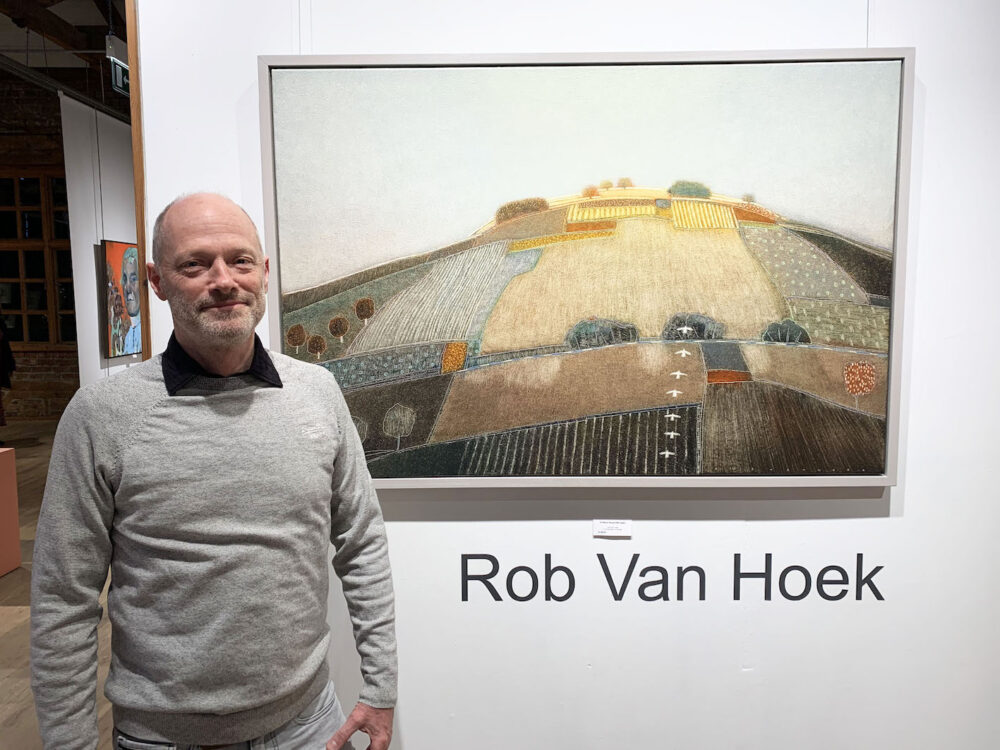 When I look at a painting by Rob Van Hoek – and my eye does get drawn to them – I’m pretty sure I know the landscape depicted, even though he’s a Dutchman who has always lived and worked in the Netherlands.
He smiles knowingly.

“Someone in Ireland said, ‘This is what I see when I look out of my window’.

“I’ve heard the same from people in Finland, the United States, even Mexico. They all recognise their own landscape because it’s universal.

“It’s a made-up landscape but people recognise all the elements and the sense of space in them.”

There’s something comforting about this tamed and cultivated countryside that Rob shares with us. Nature in the raw it most certainly is not.

Each painting is a patchwork of fields and orchards, of plough or stubble or crops of various shapes and colours, and always shown from an elevated vantage point. Shadows tend not to fall across it.

A line of birds – although they’re more like angels if you look closely – is a Van Hoek motif. They’re usually flying over the agricultural patchwork but always we are higher still, as if in a hot air balloon.

Rob’s paintings are hugely popular. In the seven years that he has been exhibiting at The Biscuit Factory in Newcastle, he has been one of its best sellers, which explains why he is the headline artist at its Winter Exhibition.

This is for the second time, he points out.

Speaking at the opening, he recalls sending an email to the Shieldfield gallery with images attached. “They said yes very quickly. A few weeks later I sent them some paintings and they did very well.”

They have continued to do so – hence this new collection of some 20 paintings, big and small, showing the world that is mostly, though not entirely, from Rob Van Hoek’s imagination.

He was born in The Hague in 1957 and is self-taught. He started painting full time in 1993 and dismisses what went before as not worthy of discussion. 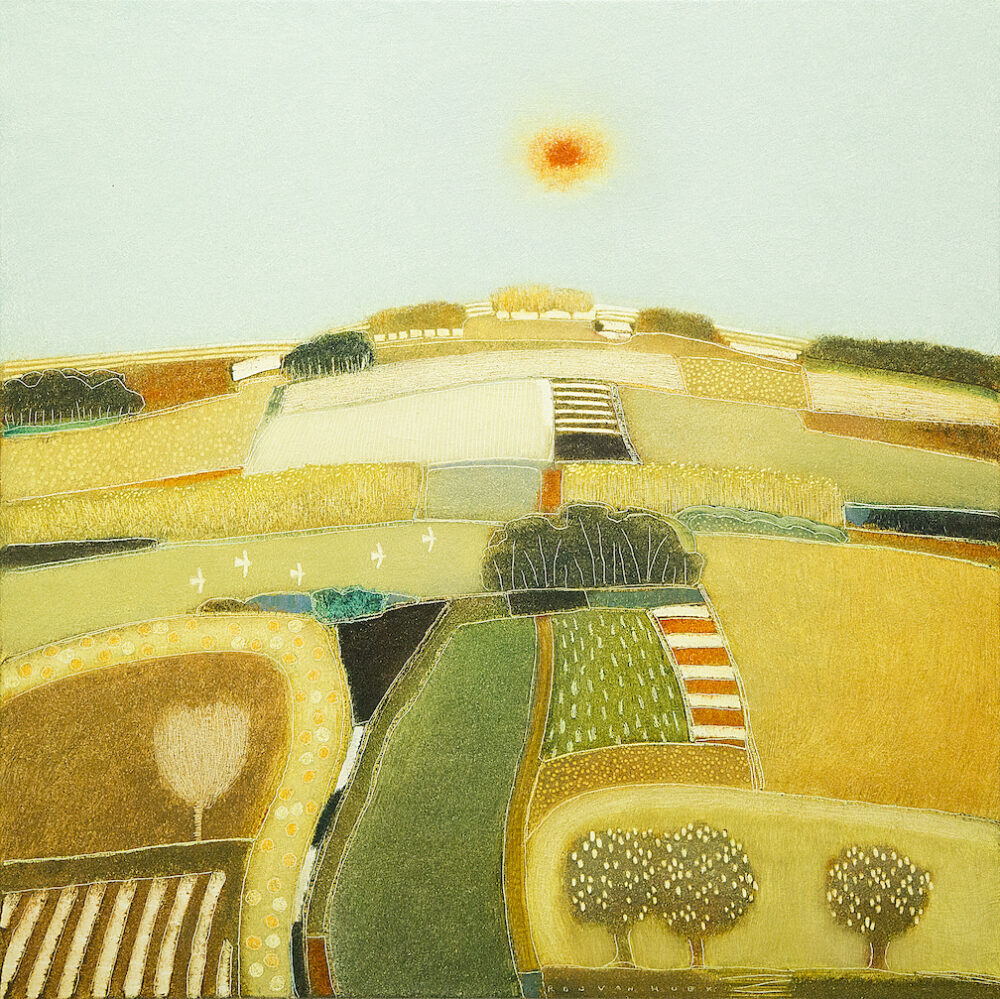 The Changes Of The Summer by Rob Van Hoek

“I was always drawing and using paints as a child and I enjoyed it very much. My father trained as an artist but didn’t practice as an artist; but I went to museums a lot. It was normal for me, art.

“I remember at high school there was a wall in my room where I used to do graffiti.

“Much later in my life art became a serious hobby. Then, quite fast, I knew this was something I was going to do for the rest of my life.”

The signature style took a while to arrive, although he always knew he loved the countryside that he walked and cycled through – and still does.

“Even great artists go through different periods,” he says.

“You have to experiment, to try one thing and then another. My style has evolved.”

He paints in oils blended with a little Liquin and cold wax medium, substances which allow for layering and texturing. It’s a refinement of technique that he settled on just a couple of years ago.

“It’s not a huge difference but the paint is a bit thicker and doesn’t flow so much, so you can make all these details in the paint.”

He uses brushes and the ends of brushes, sharpened with a pencil sharpener. Q-tips are deployed for drawing, along with “all kinds of stuff to manipulate the paint”.

On his walks and bike rides he soaks up what he calls “the rhythm” of the countryside. This is what he wants to convey in his paintings although they’re portraits of nowhere in particular.

“I don’t paint any real places but all the elements come together. I work very spontaneously. I can rub out half of a painting and do it again. It’s all about the composition.”

And if you’re wondering about the titles – A Hilltop Paved with Gold, A Sky About to Rain, Caught in the Sudden Shower – they are all inspired by song lyrics. Rob likes music as well as art.

He hopes his paintings engender a sense of tranquillity in the viewer, a sense of “feeling good, relaxed, happy”.

Speaking proudly of his work and his family, his three daughters and six young grandchildren, he seems to embody all those things.

And if you really want to track down the places he loves, you could do worse than head for the countryside of Achterhoek, a region in the east of the Netherlands, and the area around the River Ijssel.

Here the normally city-based artist has recently established a second studio in the countryside.

As ever The Biscuit Factory is packed with art for the Winter Exhibition, which runs until February 23.

Other landscape artists exhibiting include Northumberland-based Anthony Marshall, whose Dunstanburgh Daisies finds radiant colours in the coastal spot, Malcolm Teasdale, from Morpeth, who revels in the sombre palette of industrial Tyneside in the 1940s and ‘50s, and Rachael Tyler Bacon who lives in Saltburn-by-the-Sea but finds her inspiration in mountains. 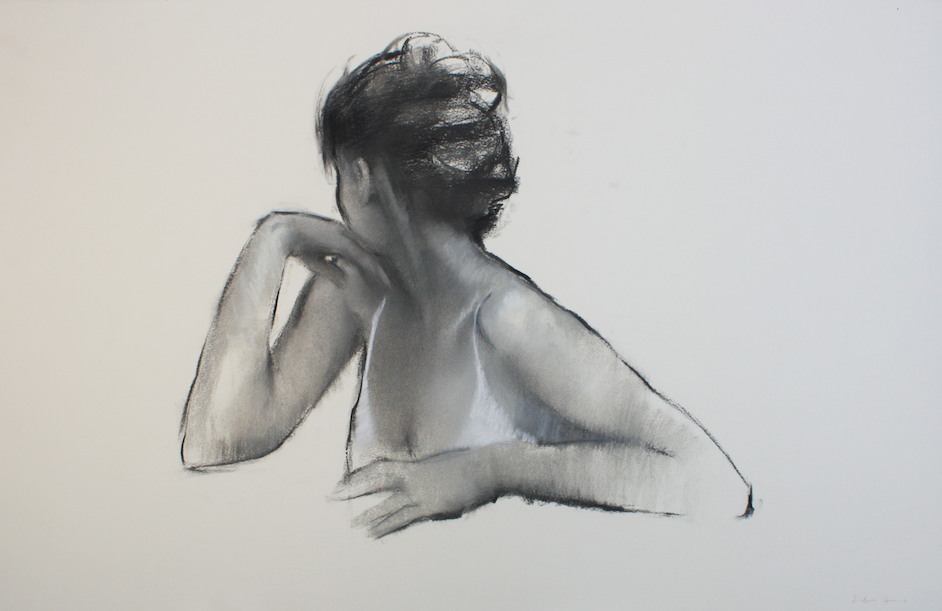 Another new headline exhibitor is India Amos, from London, whose deft and delicate sketches in pastel, charcoal and gouache show young women in floaty garments, often caught in half profile or looking away from the viewer.
Details at www.thebiscuitfactory.com

MEANWHILE… The Biscuit Factory, on Stoddart Street, is one of the venues participating in the 24th annual Ouseburn Open Studios this weekend (Saturday and Sunday, November 23 and 24, 10am to 5pm).

This is the pre-Christmas buying and selling weekend when the 200 artists and designer-makers of this Newcastle cultural quarter entertain the public and ply their wares.

Bauble painting and cocktails are among the attractions at The Biscuit Factory, along with the extensive art on display, its café and its bookshop, a satellite of Forum Books of Corbridge.

• 36 Lime Street, the pioneering studio complex that is home to 30 professional designers, artists, musicians and makers.
• Jim Edwards’s studio at 59 Lime Street where the painter produces his distinctive landscapes of the North East.
• Northern Print, Stepney Bank, the home of print in the North East, where there will be a gallery exhibition and printmaking demonstrations.
• The Biscuit Tin Studios, Warwick Street, which is home to artists, printmakers, ceramicists, street artists, designers and musicians.
• The Kiln, 4 Hume Street, where the pottery studio will be open for visitors to get their hands dirty.
• B.Box Studios, on Stoddart Street, the latest studio complex in the Biscuit family.
• And Mushroom Works, 8 St Lawrence Road, whose artists have again contributed to an exhibition of artworks all measuring 20×20 centimetres and priced at £20. 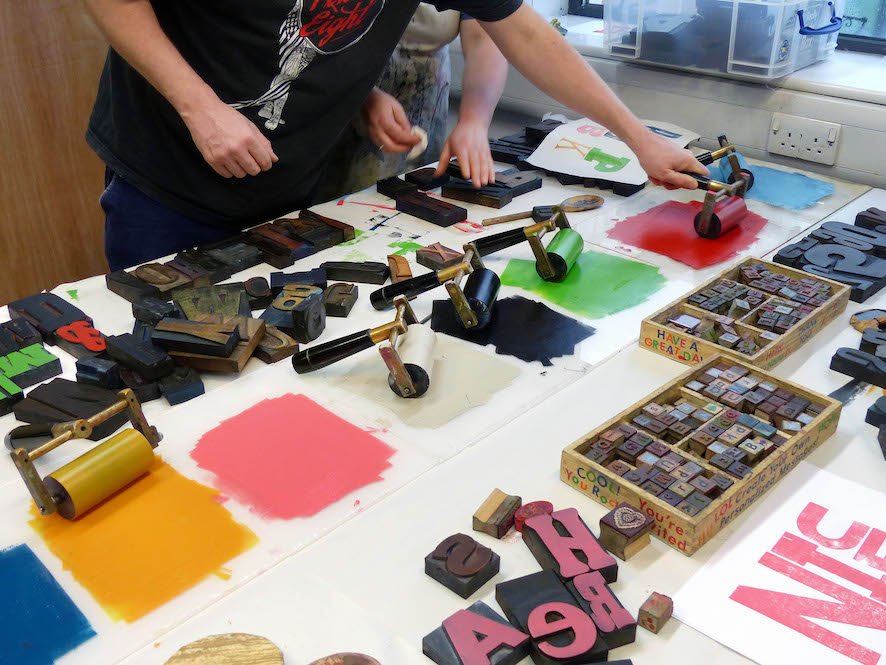 Sim Zack, manager of The Biscuit Factory Studios, says: “Open Studios is a wonderful showcase of the artistic variety we have here in the Ouseburn.

“The Ouseburn Open Studios events are community-driven and allow the public to experience what we do first-hand.”

Back to articles
« Time for Books on Tyne
Fighting back against coercive control: Free screenings of acclaimed play in Newcastle and Gateshead »
Share on
Share on