Baltic to see The View From Behind The Futuristic Rose Trellis 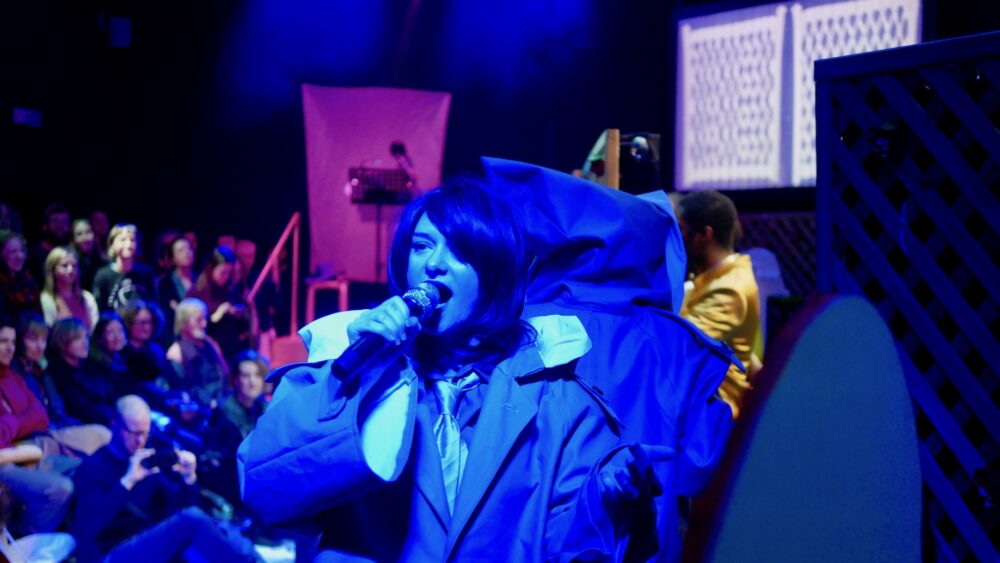 It’s opera… but not as you know it. That’s the way they’re billing the latest live performance at Baltic Centre for Contemporary Art where conventions and expectations are regularly challenged.

This particular opera – or operatic thingy – is called The View From Behind The Futuristic Rose Trellis and it sounds extraordinary and, if I’m honest, a bit crackers.

It is the brainchild of Ravioli Me Away, a “post-punk cabaret band” comprising Alice Theobald on keyboards and vocals, Sian Dorrer, drummer and lead singer, and bass player Rosie Ridgway.

Alice, who was at Baltic in 2015 when collaborating on an installation sponsored by Newcastle-based Ryder Architecture, says the band was formed in 2013 and plays at conventional music venues and at art festivals.

All three musicians are also artists. Alice, originally from Leicester, studied at Goldsmiths and the Royal Academy Schools in London. But music and performance art – and now, it seems, opera – fall within their sphere of interest.

“We’ve always dressed up in our regular gigs,” says Alice.

“We play around with different archetypes and characters. We started out having different themes. We’d have a gig where we’d be dressed as DIY painters and decorators or luggage. Once we dressed as beauty queens. There’s a bit of social commentary.

“But the songs have a structure. We’ve done several albums and toured the UK and Europe several times. We’ve got a following.” 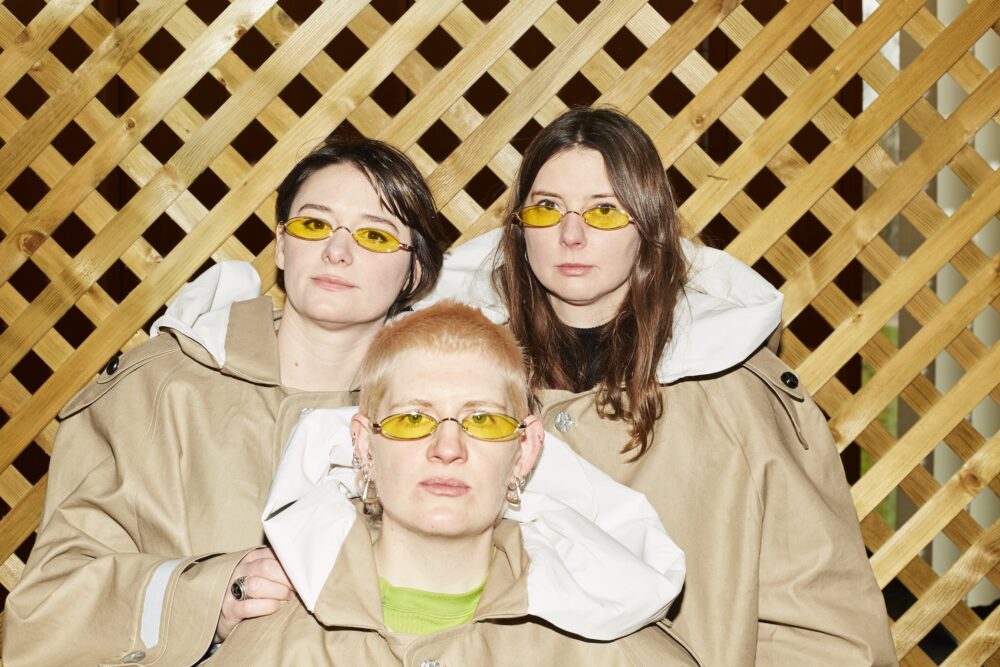 Post-punk cabaret band, Ravioli Me Away are behind the production

“We’ve always wanted to do something bigger, more collaborative and theatrical, and involving more props and costumes,” says Alice.

“On long car journeys we’d get inspired by the lives we imagined in different towns and the different characters we’d see.

“We accumulated a sort of archive of ideas which we developed during a set of residencies at Wysing Arts Centre, in Cambridgeshire, who agreed to help produce it.”

The resulting “performance extravaganza” involves nine performers and musicians including a professional opera singer, mezzo-soprano Siobhan Mooney, who is cast as The Opera Singer.

“Siobhan has done conventional opera but she’s also got a strong interest in other sorts of music,” says Alice. “She has done experimental stuff so she really got it.

“She’s singing songs but also narrating or describing what’s going on. It’s a sort of talking opera but also multi-genre. There’s a country song, some drum and bass and a more traditional pop ballad.” 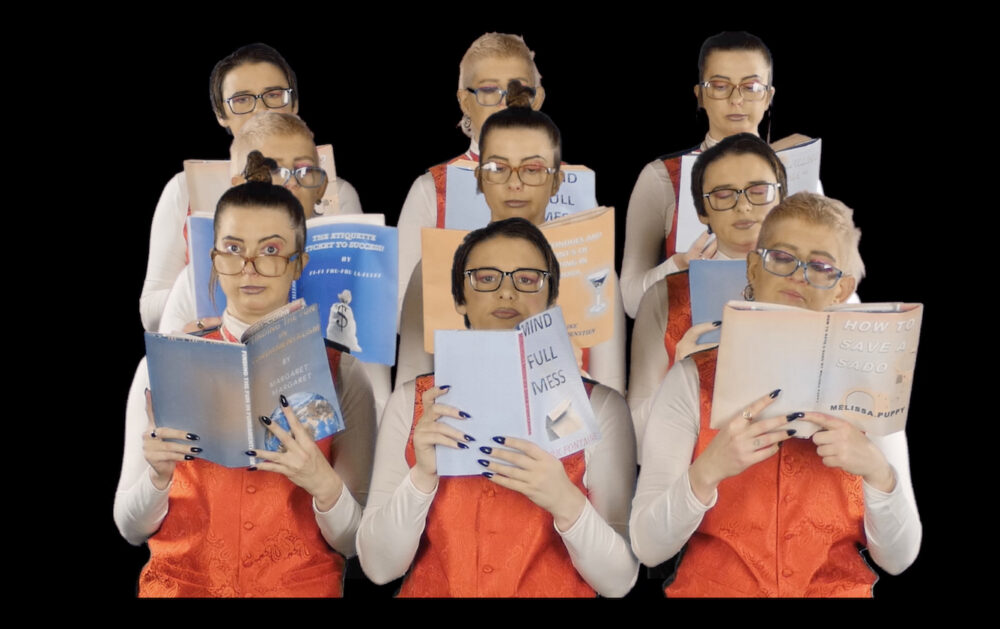 Another collaborator is Dean Rodney Jr who plays the character called Fresh Eyes. An accomplished lyric writer who has autism, he wrote some of the songs for the piece.

Is there a recognisable story? “Well,” says Alice, “there’s a kind of climactic ending but it’s not really a conventional linear story. It’s much more about a kind of surrealist dream world.

“There are characters whose worlds intertwine but the overarching characters are called The Professional and The Protagonist.

“The Protagonist represents the lost soul of humanity which is looking for a body to give itself meaning.”

This is a work that doesn’t lend itself to easy definitions.

“It’s been like a kind of puzzle,” admits Alice. “As it’s gone along we’ve invited other people to have input and it also reflects the very particular view of the world of the character Fresh Eyes.” 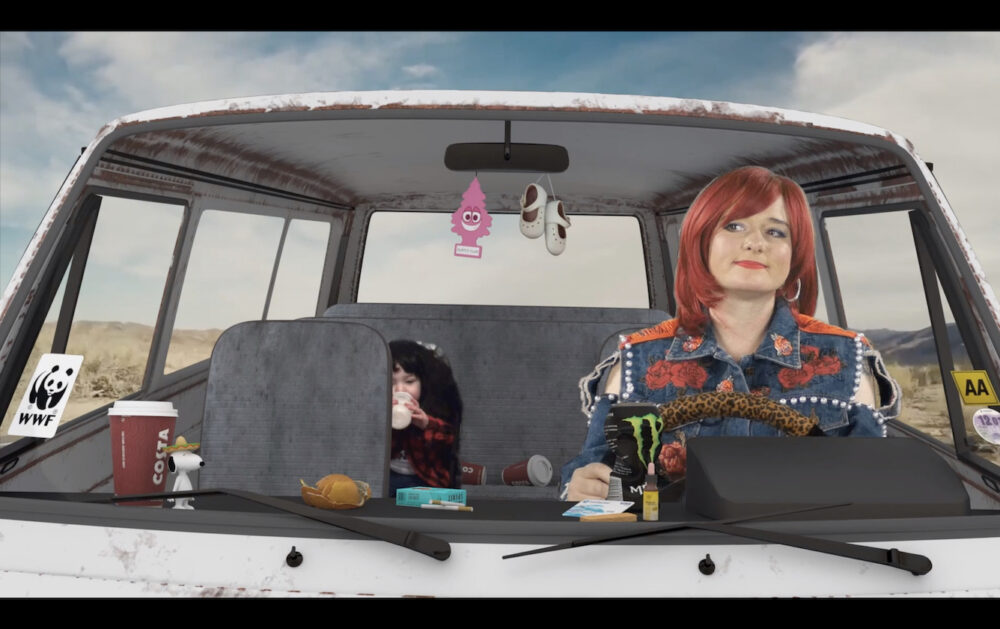 The premiere took place in February at the Wysing Arts Centre and Alice won’t forget it.

“The performance itself was really good. The lead up to it was a bit bonkers because we’ve created a technical nightmare with three synchronised projections including 95 separate video files.

“We also worked with an animator to create work integral to the piece. The result is this quite complex interaction between pre-recorded material and the live element.

“We worked on a knife edge and the first full run-through was actually the premiere. We’re finding as we’re going along it’s getting smoother.”

Finally, that title. What does it mean? Alice laughs. “I guess we all have slightly different interpretations but I’d say the rose trellis represents a kind of aspirational but mundane suburban home life.

“We’ve been using the rose trellis as a stage metaphor about looking through into other people’s lives.

There’s a utopian and dystopian aspect to it. To be honest, there are so many layers and elements.

If you fancy exposing yourself to it, The View From Behind The Futuristic Rose Trellis is being performed at Baltic on Saturday, May 18 at 7.30pm. Tickets are £15 via baltic.art – and Baltic is staying open after normal closing time on Saturday as part of The Late Shows.

Back to articles
« Review: Floorboards at Alphabetti Theatre
The Late Shows 2019 – Well worth staying up for! »
Share on
Share on