Roy Lichtenstein was a serious artist who could see the funny side. David Whetstone visited the exhibition of his work which has just opened in Newcastle 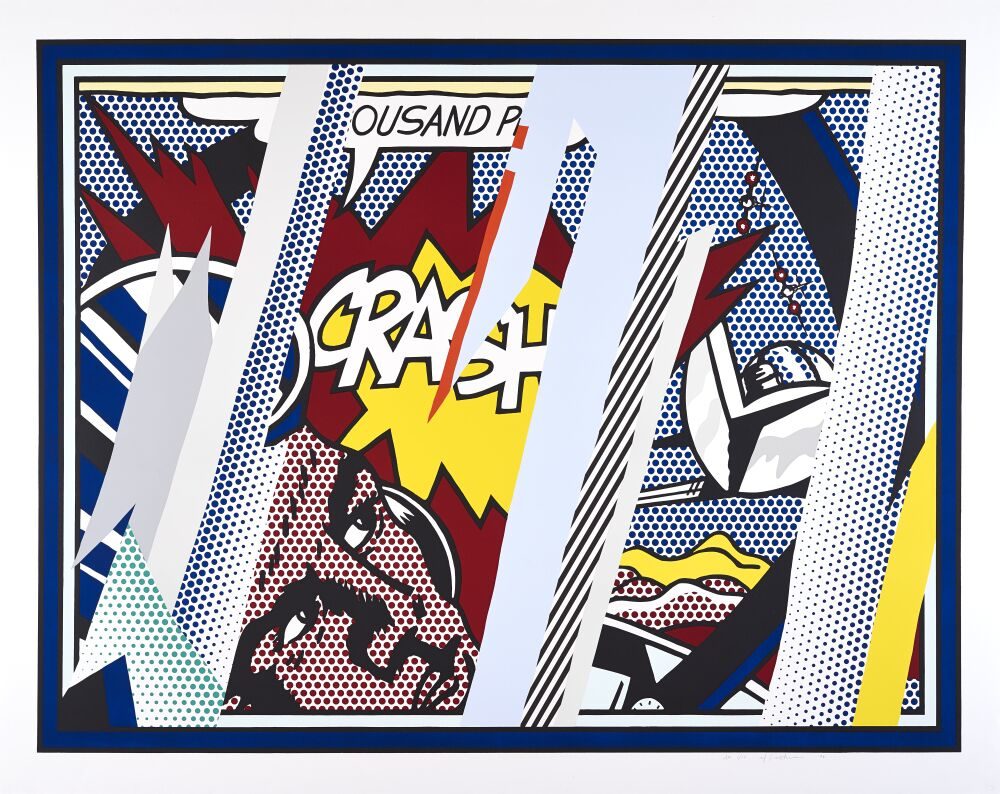 Reflections on Crash, 1990 by Roy Lichtenstein

Accompanying the exhibition of Roy Lichtenstein prints which has opened at the Hatton Gallery is a film that made me smile.

American writer Frederic Tuten, reminiscing about his friend’s sudden rise to fame, says “a lot of people were upset about it”.

Especially upset, he suggests, must have been the abstract expressionists (the likes of Jackson Pollock with his thickets of splattered paint) who “saw their whole anguished world vanish in this kind of ironic, witty and beautifully done work”.

Even if they weren’t gnashing their teeth, it’s fun to imagine they were.

Lichtenstein, you’d judge from the film, smiled a lot. He was “easy going, charming, not judgmental”, says Tuten, adding that he used to joke about taking “curmudgeon lessons”.

In the early 1960s, Lichtenstein was not the man to ignore America’s vibrant popular culture. He had a crack at painting Mickey Mouse and Donald Duck… and then turned to comics.

He elevated the cheap, garish and ubiquitous comic strip by giving it the fine art treatment, taking single moments out of context, subtly adapting them and displaying the results on gallery walls.

The process fascinated him. In comic strips, dots designate shading (closely packed for dark, sparsely distributed for light). The faithful recreation of these so-called Ben-Day dots, named after the 19th Century American printer who invented them, characterises these Lichtenstein images. 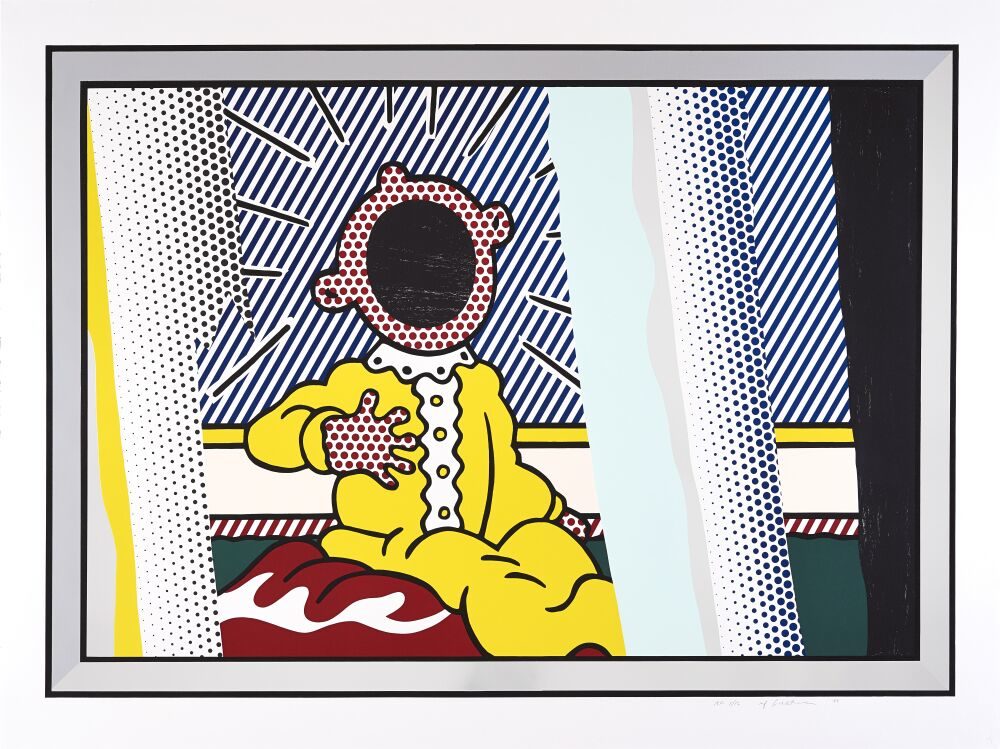 Reflections on The Scream, 1990 by Roy Lichtenstein

The answer to that intended killer question is almost invariably yes. And now that Lichtenstein’s name is carved deep into art history – a pioneer of Pop Art – and his paintings sell for millions, it tends not to be asked of his work any more.

The film, Roy Lichtenstein: Diagram of an Artist, was made for a major retrospective at Tate Modern in 2013, 15 years after the artist’s death from pneumonia at the age of 73.

That survey of his life’s work included the painting which first caused Lichtenstein’s name to register with me, probably roaring off the page of a Sunday supplement.

Whaam! is a diptych (painting in two parts) showing one fighter plane blasting another which is exploding in a red and yellow fireball. On the painting is a box of text as well as the sound effect, in bold, staggered capitals, that is also its title.

I can remember the effect it had on me as a boy. Wow!

I read comics. Any message may have been paper deep but the image was arresting and thoughts of it lingered. That that could be art… how exciting! Created in 1963, the Tate bought the painting three years later.

The Hatton, managed by Tyne & Wear Archives & Museums (TWAM) for Newcastle University, has its own place in the history of Pop Art because one of the movement’s British leading lights, Richard Hamilton, taught at the university. 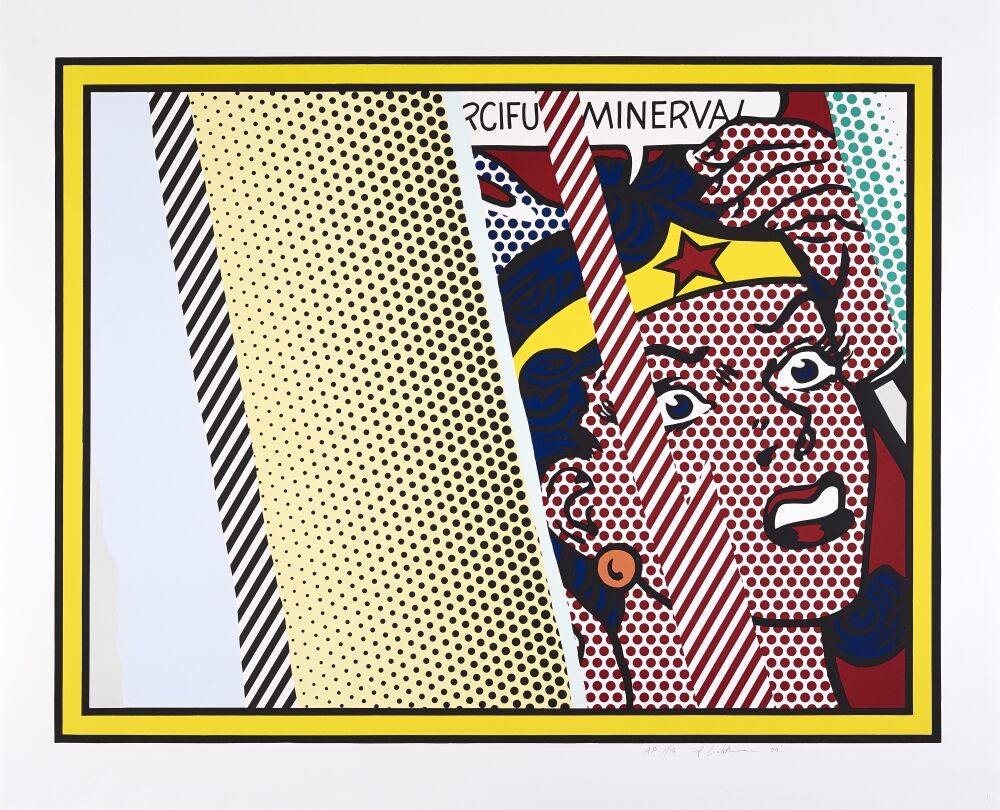 Reflections on Minerva, 1990 by Roy Lichtenstein

The touring Lichtenstein exhibition comes to it courtesy of ARTIST ROOMS, a collection of some 1,600 works of art owned by Tate and the National Galleries of Scotland, with most works held on long loan from the Roy Lichtenstein Foundation.

It doesn’t include Whaam! But there is a lithograph called Explosion, from 1965-6, which captures another flash of comic violence. Purporting to be a blow-up (literally) of a comic artist’s work, it is also an original, or at least one of a very limited print run.

Sarah Richardson, TWAM Keeper of Art, leading a guided tour of the exhibition, said of Lichtenstein: “He was one of the great American pop artists but he reinvented himself.

“Much of this is from the 1990s where he’s reflecting on his work of the ‘60s and ‘70s and bringing in other influences.”

There are two other older works in the exhibition, Brushstroke and Reverie, both from 1965.

In Reflections on Brushstrokes, done 25 years after Brushstroke, the artist distances himself from the earlier, much simpler work – one of a series – by putting a stylised reflection in front of it.

The 13 works in this room also reference the artist’s lifelong love of jazz and his debt to other artists.

Reflections on The Scream, from 1990, is a homage to Edvard Munch as well as a mischievous subversion of the Norwegian artist’s most famous work. 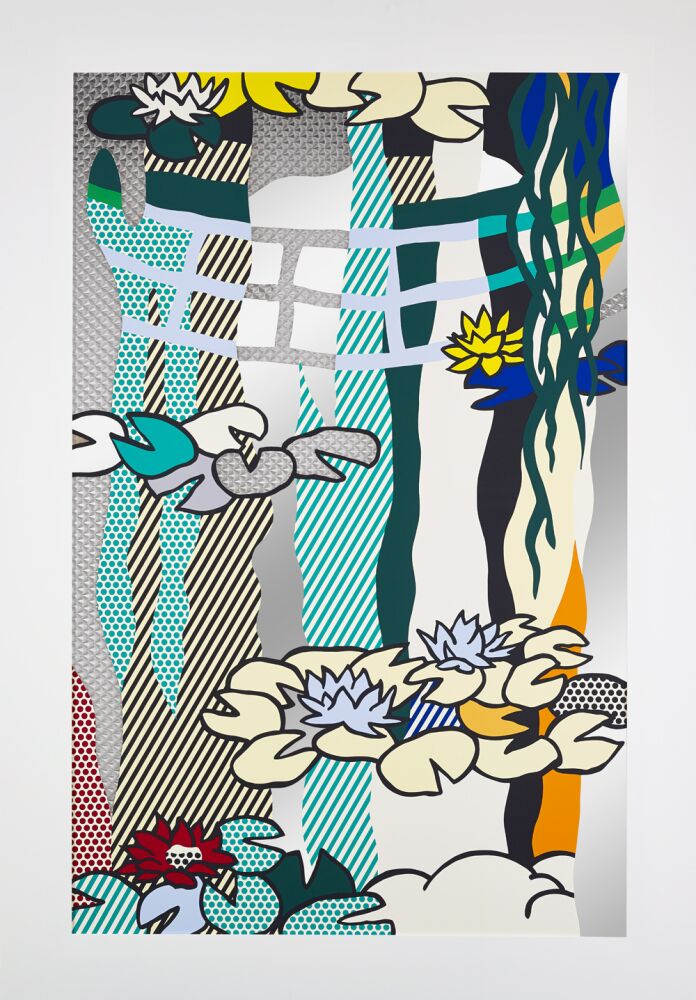 “Munch’s painting is about angst and feeling and oppression whereas this is just the opposite,” said Sarah Richardson, standing before Lichtenstein’s bawling baby borrowed from a 1940s comic strip.

There are examples of the nudes Lichtenstein created in later life, undressing the figures in a 1963 comic book called Girls’ Romances to make what the exhibition calls “generalised objects of desire”.

In a second room are five pictures inspired by the work of Picasso and Monet, both of whom Lichtenstein much admired.

Lichtenstein was inspired by the images and the processes of mass production and wasn’t averse to a bit of it himself.

On display in the larger room are some parts of a dinner service dating from 1966 which bears his design and was produced in an edition of 800 in New York.

Few people, given Lichtenstein’s popularity at auction, are probably now eating their dinner off this.

Visitors to the exhibition can, however, buy a Lichtenstein colouring book and other merchandise in the shop.

Whatever the abstract expressionists might have felt, it would be hard to argue that Roy Lichtenstein’s work didn’t capture the spirit of his age. This exhibition offers a tantalising taste.

Back to articles
« Review: Kathryn Williams Anthology Tour at Sage Gateshead
Daniel Sloss returns to Tyneside with his X »
Share on
Share on