A masterclass which hits all the right notes

Fresh off the stage at Covent Garden, celebrated opera singer Nicky Spence was brightening up the afternoon for Newcastle schoolgirls. And David Whetstone,  who reports back. 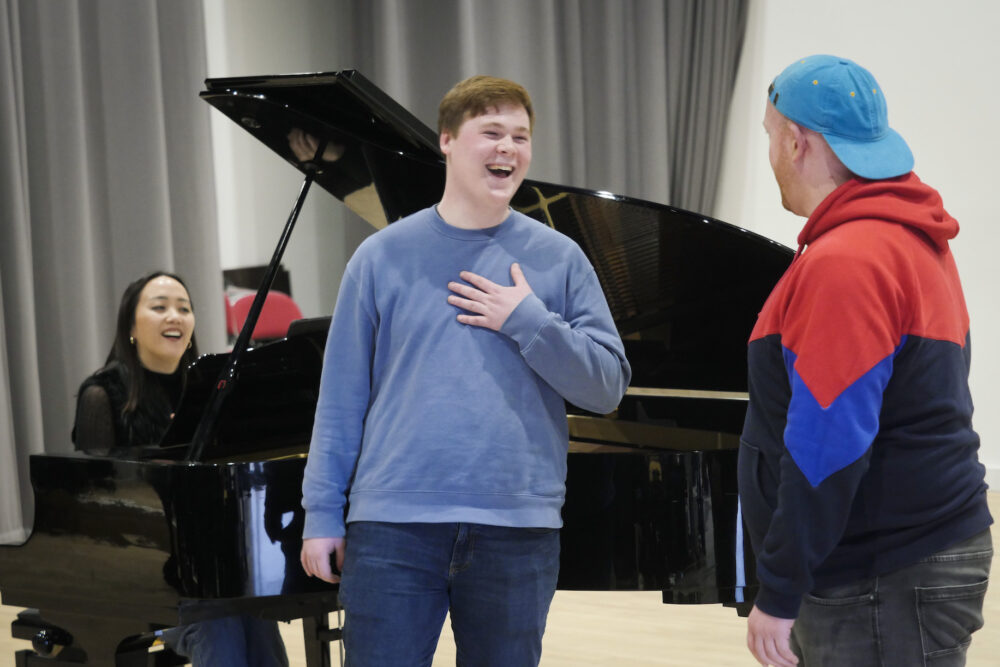 “Sorry,” said Nicky Spence as his schoolgirl audience collapsed like a giggling souffle. “It looks as if I’m massaging a small cow.”

There was no cow, big or small. This was a vocal masterclass at Sacred Heart Catholic High School in Fenham, Newcastle, and Nicky’s exaggerated stroking motion was to represent legato, the musical term for smoothness.

Beside him, 14-year-old Clare Aspray had been putting her all into a number from Oklahoma! but had stopped abruptly, what with the hand movements and the mirth.

She’d sounded good but this was a masterclass and Nicky’s job was to turn good into very good.

He’s well qualified to do that. Having grown up loving pop and musical theatre, the Scot from Dumfries won a place at London’s Guildhall School of Music and Drama at the age of 16 and it was there that he had his first proper singing lessons.

By the time he graduated he had signed a record deal with Universal Classics and was soon appearing on TV and touring with the likes of Katherine Jenkins and Shirley Bassey.

Now in his mid-thirties, he has a burgeoning career as an operatic tenor.

In the autumn he was at Newcastle Theatre Royal with Opera North and just this month you would have found him at the Royal Opera House, Covent Garden, performing in Alice’s Adventures Underground.

“I played 12 different characters so had about one second to change from being a fawn to Tweedledum,” he told his young audience. 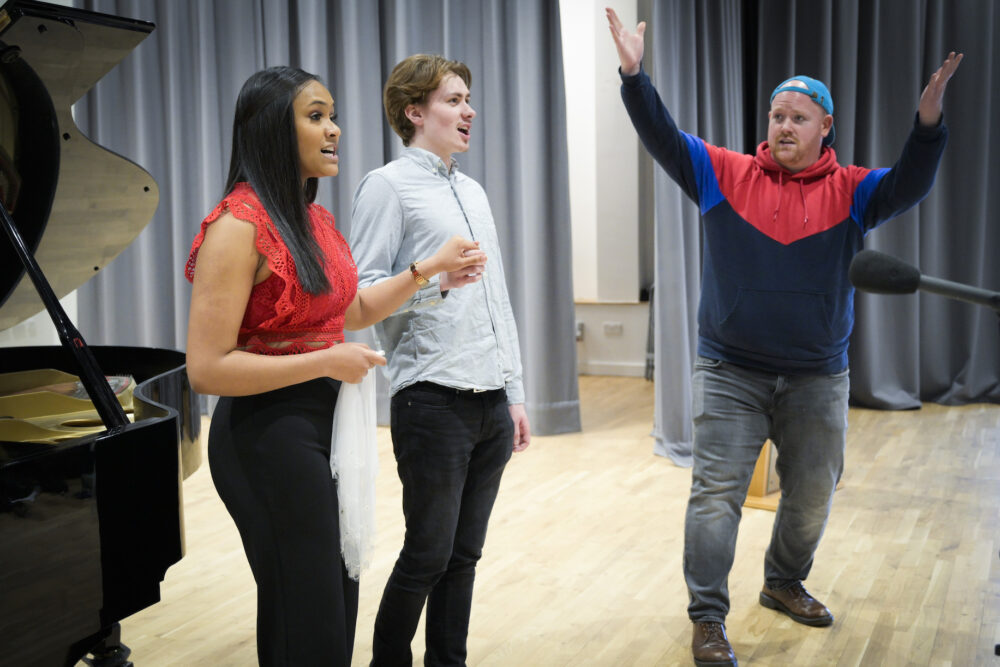 When asked how he remembered the words, he confided: “I’m really good at making up words. In a long recital you’re bound to forget one or two, but the chances are you’ll know the piece better than most of the audience.

“A little bit of showbusiness gets you through.”

Included on Nicky’s CV is the fact he’s a Samling Artist. This means he is among the growing number of opera singers who, in their formative years, attended one of the prestigious masterclass weeks run by the Hexham-based Samling Institute for Young Artists.

Reflecting on that 2006 experience after the Sacred Heart session, he said: “It was fantastic. You need a bridge between being a student and a professional and this was unlike anything else.

“You’re working with people who are at the very top, experts in their field, and they’re giving up their time for you.”

Now Nicky is passing on the favour, giving up his time to work as an experienced and charismatic leader with the young singers – aged 14 to 21 – who attend the Samling Academy.

Set up to complement Samling’s work with singers on the brink of their professional careers, the Academy provides coaching and performance opportunities to some of the brightest young talent across the North East. 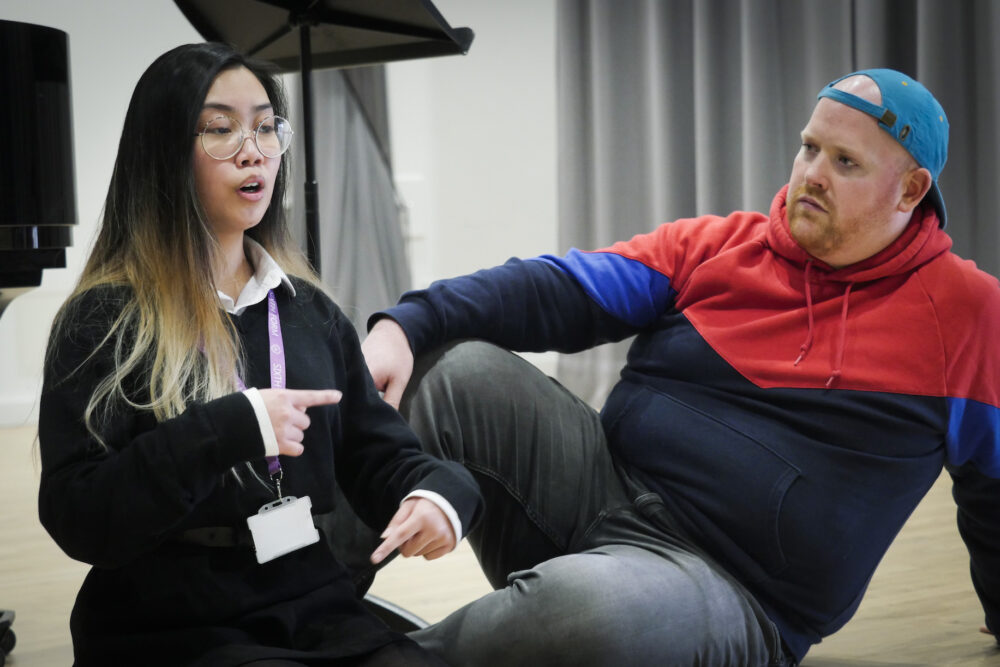 Samling Futures, which is what brought Nicky to Sacred Heart and other schools in Morpeth and Middlesbrough, is a project designed to identify that talent while introducing youngsters to classical singing.

Karon Wright, artistic and executive director of Samling, explained: “I firmly believe that in every school there are young people who have the talent and potential to sing classically.

“Through the work of the Samling Academy, we want to help every young singer to find their voice.”

Then they saw Nicky, aided by piano accompanist and fellow Samling Artist Somi Kim, show the young singers how to raise their game with a subtle change of emphasis or stance.

After that it was the turn of the audience to have a go and there was more laughter as the girls were encouraged to relax their bodies and exhale in a low “Moo”.

“I was terrified,” Clare said afterwards, although you would never have guessed. As a former chorister at Newcastle Cathedral, she wasn’t unused to singing in public.

But Nicky showed her a basic operatic skill: how to move and sing at the same time. 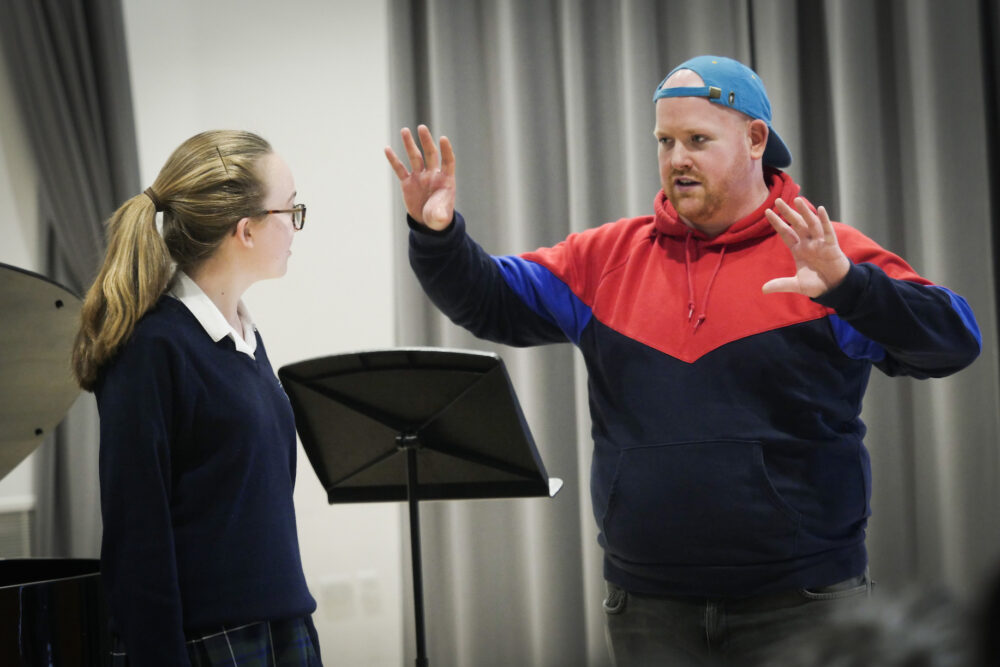 Pheea, who is preparing for her grade eight singing exam, sang John Dowland’s mournful Flow My Tears, from 1600. She looked more than mournful when Nicky took away her music and suggested she sit on the floor.

Thos Oates, head of music at Sacred Heart, had been watching. While the school prided itself on providing a top class education, activities such as this were “vital”, he declared.

“To have musicians of this calibre running a workshop is a great opportunity.”

He believed arts subjects, which have been marginalised in some schools, had a lot to offer.

“We have worked in the past with the Royal Shakespeare Company, English Touring Opera and Dance City, so in this school we’ve been very lucky,” he said.

“I think there are life skills students can gain. Apart from the chance to become an actor or musician in their own right, there’s the discipline needed to work for hours on your own, perfecting something, or to work with others in an ensemble.

“We try to instil those skills but this sort of thing really helps.”

Current Samling Academy members are working towards a production of Mansfield Park, John Dove’s opera based on the Jane Austen novel, which will be performed at The Witham, Barnard Castle, Sage Gateshead and the Ryedale Festival, North Yorkshire, in July.

Meanwhile the next batch of Samling Artists can be seen in a public masterclass and concert at Sage Gateshead on March 7.

Find details of all at www.samling.org.uk

Back to articles
« February half term: Rocket Girl takes off at Alphabetti Theatre
Review: The Last Temptation of Boris Johnson at Northern Stage »
Share on
Share on